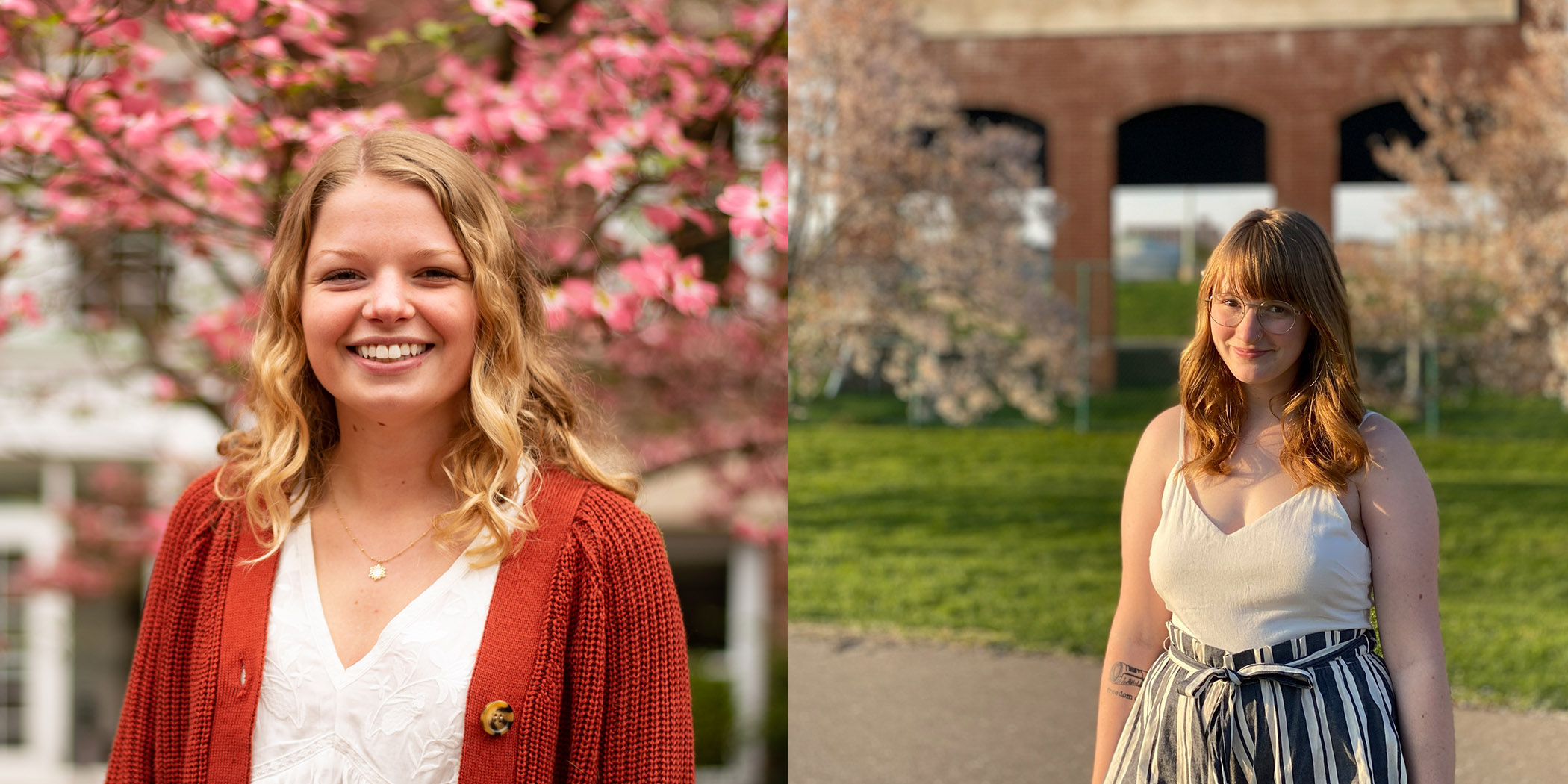 Ellen Wagner, left, and Abbey Marshall, right, will remain in Ohio to report in Youngstown and Akron, respectively.

Two Ohio University seniors who will graduate next week are among the ranks of the 2020-2021 Report for America Corps Members.

A national service program that places journalists in local newsrooms to report on under-covered issues and communities, Report for America is creating a new, sustainable system that provides Americans with the information they need to improve their communities, hold powerful institutions accountable, and rebuild trust in the media. Out of 1,800 applications received, Report for America chose 225 journalists to serve 162 newsrooms across the country.

Ellen Wagner, who most recently served as editor-in-chief of the independent student newspaper at OHIO, The Post, was placed at local news outlet Mahoning Matters. Wagner will serve as a watchdog reporter related to the decline of city services.

Previously, Wagner covered health, local events and crime as a metro intern at The Columbus Dispatch. A Westlake, Ohio, native, Wagner will receive her bachelor’s degree in journalism a certificate in Italian studies.

Along with the other executive editors of The Post, Wagner won the Society of Professional Journalists’ 2019 Mark of Excellence Award for editorial writing. She credited all of her journalism professors for her success thus far, especially Tom Suddes, who was her professor for multiple classes and has been supporting The Post long before she joined.

“I will always remember his classes and Friday morning critiques that helped me learn from my mistakes and search for new ideas,” Wagner said. “He has taught me how to see an idea from all sides and to look hard for information on a story because it is out there somewhere to be found. I have learned so much over the past four years. Every single one of my journalism professors have taught me skills that have made me a better journalist over the years. Through successes and failures both in and out of the classroom, I have learned so much and have the Scripps School to thank for it.”

Abbey Marshall will be reporting for The Devil Strip, a community-owned, independent news outlet in Akron, Ohio. Marshall, who will graduate next week with a bachelor’s degree in journalism, has had a multitude of reporting experiences that led her to this position with Report for America.

She worked internationally in Mumbai; she freelanced for a daily newspaper in Appalachian Ohio, The Athens Messenger; she interned twice at The Columbus Dispatch; and she interned at POLITICO, one of the largest political digital publications in the country.

“Of all those internships, I can firmly say my favorite experiences was my time spent in Ohio. Ohio is my home, and I want to serve the people from my home the best I can,” she explained. “Too often, local journalists are overworked and underpaid, which leads to burnout. Local outlets are hemorrhaging money. Yet, the journalists there are the most driven and qualified to give people in their communities the news. Local journalism is something I am truly passionate about: those reporters are the ones who are requesting the city budgets, exposing mayoral corruption, telling the heartwarming story of the local baker starting a program that feeds the hungry. I would be honored to be a part of a newsroom that does that. Report for America is a great organization because it helps keep strong and vital reporting in newsrooms that bolster communities.”

For The Devil Strip, Marshall will be covering how broad economic trends affect the people of Akron, especially those who are traditionally disenfranchised.

“Good community journalists give a voice to the voiceless and impact real change through their writing and reporting,” Marshall noted. “I will be spending the bulk of my time doing deep-dives into economic challenges in the area, as well as investigations.”

Marshall is grateful to the many professors she’s had that taught her the importance of data reporting and investigative work in communities.

She’s upset her senior year came to a close in the way it did. She left her data journalism class not realizing it would be her last time leaving Schoonover Center. Marshall wasn’t able to give that building, nor the professors who have mentored her and friends she’s made, a ceremonious goodbye.

“In a way, this situation made me more grateful for the time I've spent here,” she said. “I've most valued my time in the Cutler Scholars Program, and I'm incredibly thankful to that program for providing me with a full academic scholarship and some of the best friends and opportunities I could've asked for. I'll miss my days sitting at the front desk of Schoonover Center or behind the bar of Donkey Coffee, but I'm excited for what lies ahead.”