OHIO senior gets early start on journalism career at POLITICO 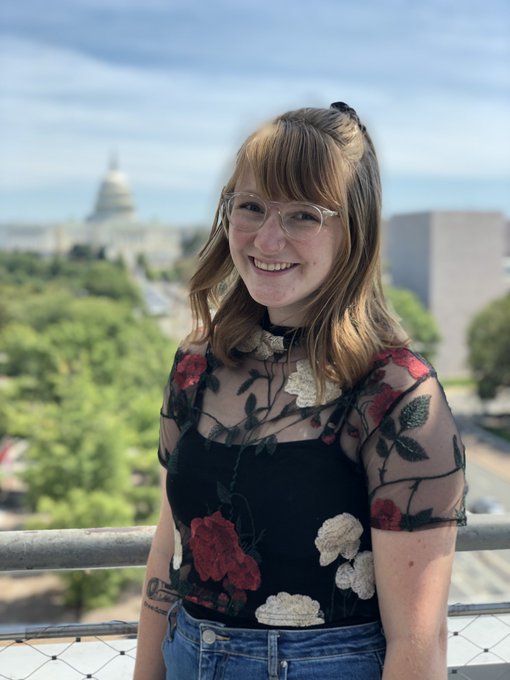 When Abbey Marshall moved to Washington, D.C., a few weeks ago, Ohio University Professor Andrew Alexander told her that the city is incredible to work in because one can see the pages of history turning in front of them.

It seems that would prove to be true, as she started a breaking news position at a major political outlet in the nation’s capital the day before the third impeachment inquiry proceedings in the history of the United States.

“My first few days were a whirlwind,” said Marshall, an OHIO senior studying journalism and a member of the Cutler Scholars Program. “I went home mentally and physically exhausted, but at the same time, the most satisfied I had been in a while. This is such a historic time in politics. … Working at POLITICO is amazing because they don’t expect interns to tote coffee and do meaningless work. I had bylines in my first few days; they expect the same work out of me as a working reporter.”

Marshall is in Washington as a part of the Scripps in D.C. program, where students take four weeks of intensive 40-hour-a-week courses in journalism and visual communications and then complete an internship that they must secure on their own.

She applied to POLITICO, one of the biggest names in Washington media, in early May with high hopes — and for good reason.

Marshall has several journalism experiences and internships under her belt, having worked two summers at The Columbus Dispatch as a metro reporter and digital producer; a freelancer for The Athens Messenger; an intern for a nonprofit in Mumbai; and she attended the White House Correspondents’ Dinner as a scholar. She also freelanced a story for The Lily, a publication from The Washington Post.

“I knew I would be qualified if I was given the chance, but it didn’t change the excitement and shock I felt when I was asked to interview,” Marshall said. “(POLITICO) carries a lot of weight with fellow journalists and the people literally shaping our country in this city. … Landing such a high-profile internship as a senior in college is such an important learning experience and will help me make contacts to hopefully get a job when I graduate.”

There’s definitely no shortage of contacts in Washington, and many of them are OHIO alumni. During her time in Washington, she’s met Bobcats working at The Washington Post, NPR, PBS, the Wall Street Journal, and The New York Times, just to name a few.

When she graduates in May, Marshall aspires to work in Washington as a reporter, though she’s still trying to figure out in what capacity. While she loves the rush and adrenaline of covering breaking news, she would eventually like to work on projects and long-form pieces about how policy affects people in the United States.

“Storytelling is my passion, and there are many, many voices that need to be heard that we can provide a platform for,” she added.

That passion has only intensified over time, gradually increasing after each short story she authored as a child and each “book” she illustrated — which were really just makeshift pieces of paper stapled together. Growing up, she even made a family newspaper.

Dale Conner is the advisor of Mason High School’s student newspaper, The Chronicle, where Marshall was a reporter at the end of her freshman year, and then editor. When she joined the school’s journalism program, Conner said he noticed immediately that she would make a difference.

As an editor, Conner noted Marshall personally invested so much of herself in her fellow staff members that she put their needs above her own, almost as if she was more interested in seeing others built up.

“She was always looking for a way to give a voice to the voiceless,” Conner explained. “When she was writing a story, she was consumed by it. She was a great listener; when she would interview someone, she had the unique ability to get her subjects to open up and share.  She made others feel at ease around her and people trusted her.  In the high school setting, getting people to truly trust you is rare. Abbey could do that, and it was authentic.”

Flash-forward to present day — her senior year of college at Ohio University. Conner said she’s been a constant resource for student journalists in his class, answering emails, interacting with them on social media, visiting them to offer career advice, and offering feedback when they publish.

It’s possible she learned a thing or two about supporting aspiring journalists from OHIO’s journalism faculty, who she said are among the best. Marshall said Andrew Alexander is "one of the greatest professors" she's had at OHIO, adding he is one of the "kindest and smartest people" she's ever met.

Apparently, they think pretty highly of her, too.

Alexander said Marshall was a standout student in his journalism ethics course, a fast-paced class that involves evaluating and discussing case studies of actual ethical dilemmas facing newsrooms. As they debated those cases, he said Marshall's contributions were unfailing on point.

"Like most veteran journalists, I think I'm pretty good at spotting talent," said Alexander, former Washington Post ombudsman, award-winning journalist and news industry leader. "From the very first day I met Abbey at Ohio University several years ago, I knew she had our journalists' DNA. She was consumed by the tradecraft of journalism. But she wasn't just interested in how to practice quality journalism. She also cared about why it's so important and why all of us need to defend and explain the value of independent journalism."

Dr. Robert Stewart, director of the E.W. Scripps School of Journalism, said Marshall is a "great example of how good things keep coming to those who never stop working hard."