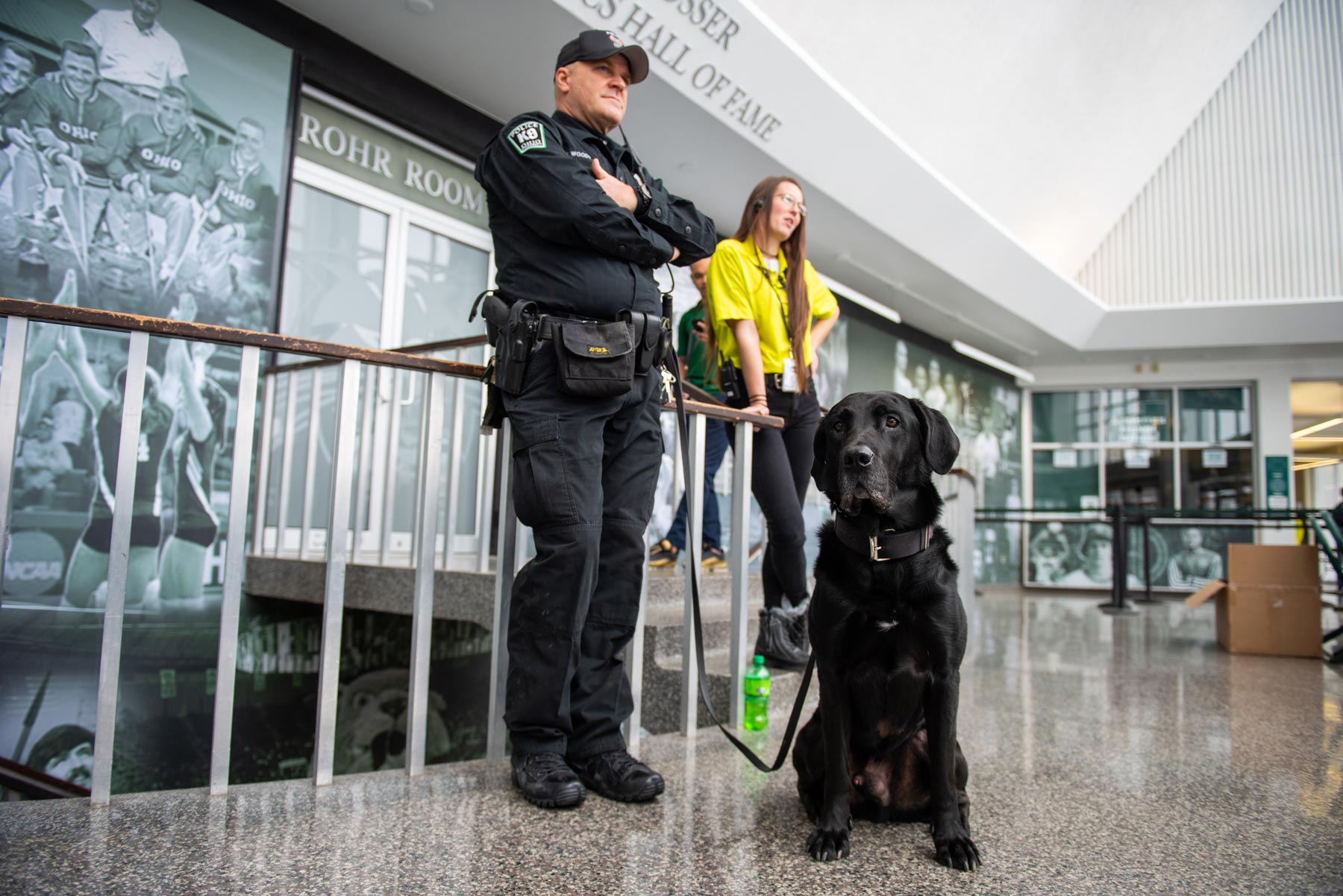 Chase squirrels? Check. Eat snow? Check. Detect explosives? Check. It’s all in a day’s work for Alex, one of Ohio University Police Department’s (OUPD) explosive detection canines and the best law enforcement officer in Athens, according to the most recent "Best of Athens" competition by Athens News.

Alex and his handler, Officer Tim Woodyard, pulled up in a police cruiser outside OUPD at 6:50 a.m. on a snowy Friday in February. Tail wagging, the black Labrador Retriever mix sprinted inside OUPD’s offices at Scott Quadrangle and ran down the hall to greet his fellow officers. As the OUPD officers held their morning briefing, Alex laid down in his designated corner of the room until the fun, otherwise known as his job, began. 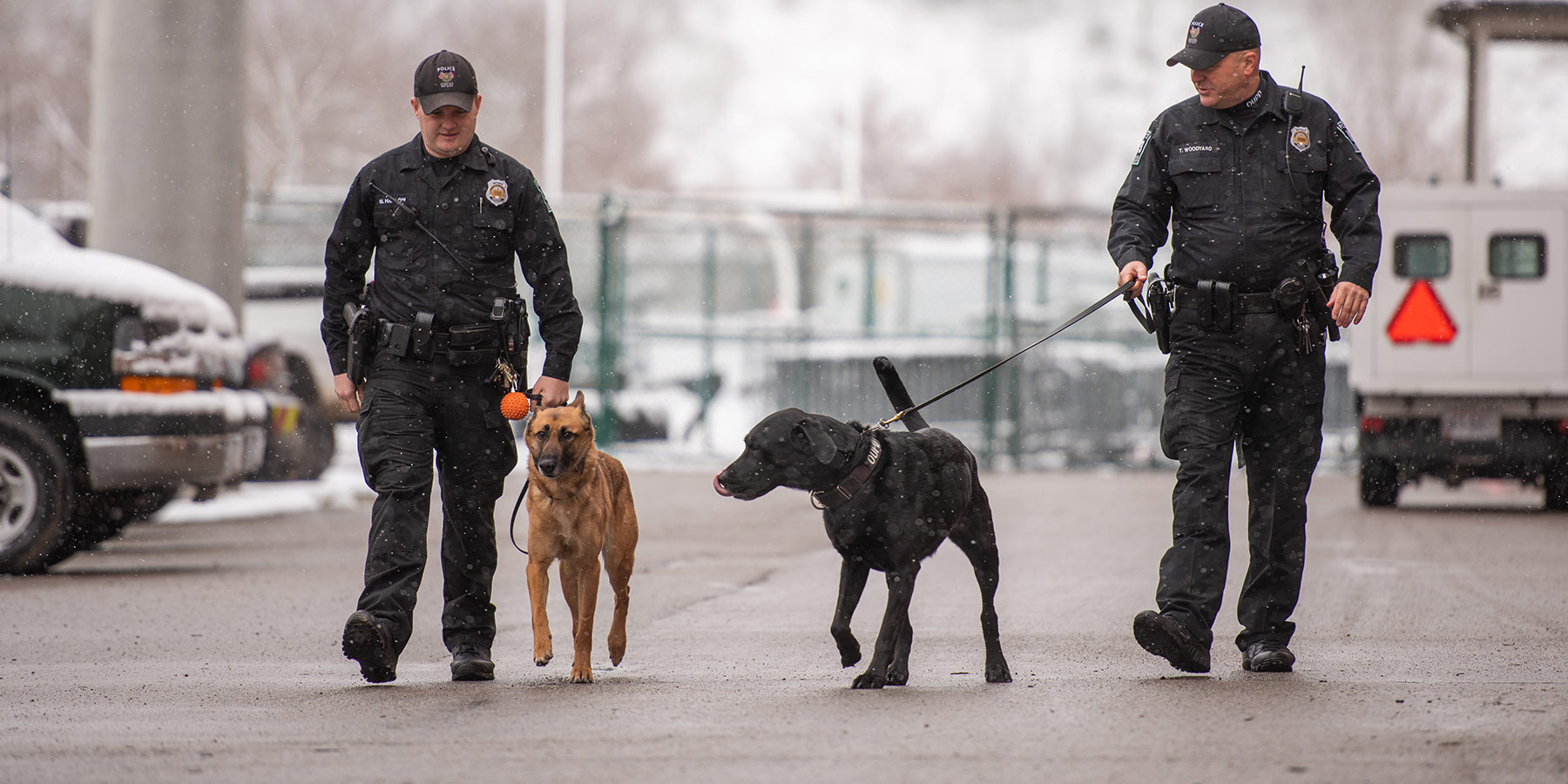 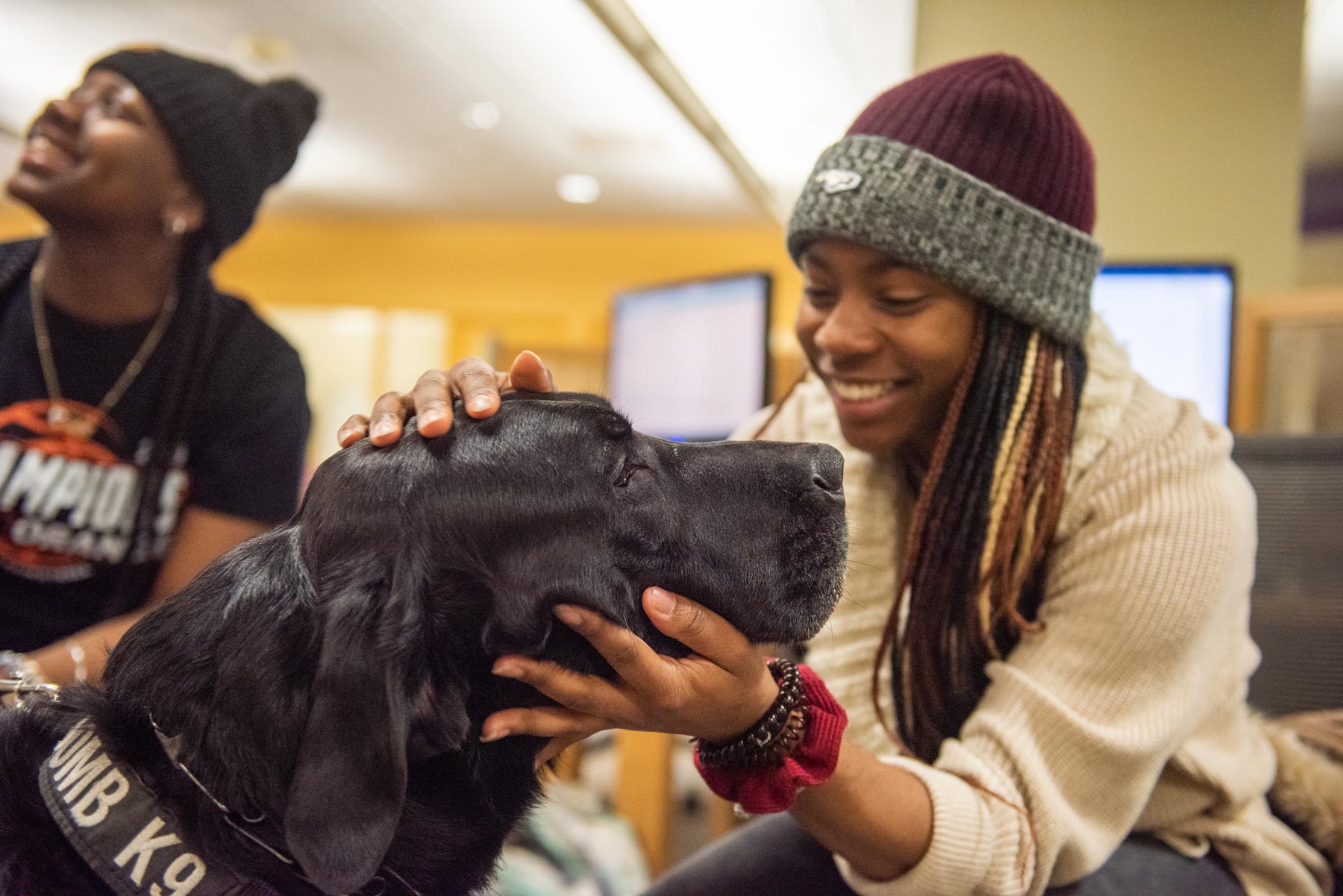 In between brushing up on his explosive detection skills around OHIO's Athens Campus and keeping the University community safe, Alex visits students throughout Baker University Center and other locations across campus.

No two days are the same for Officer Woodyard and his almost 100-pound friend. The one constant is explosive detection training, which is done daily to keep Alex’s detection skills sharp.

Alex, a rescue dog from Columbus, finds explosives every single day. He wouldn’t eat otherwise. He’s a food reward dog, meaning the only time he eats is when he finds explosives. More often than not those explosives are hidden by Officer Woodyard.

“I want him searching all of the time,” Officer Woodyard explained. “I want him thinking, no matter what we’re doing or where we’re at, ‘I might get my reward.’ He’s not thinking there’s a bomb there, he’s thinking, ‘sweet, food.’ When he finds an explosive, he’ll drool, he’ll shake his head, he’ll start scooting his butt.”

Alex learned how to detect distinct, tiny molecules used in explosive devices through a 10-week program with the Columbus Fire Department Bomb Squad.

“We might say that we smell pizza, but Alex smells cheese, flour, pepperoni and tomatoes separately,” Woodyard explained. “He smells it all, but is trained to detect certain molecules. It’s not hard for him. His nose is amazing.”

Right, Ohio University Police Department Officer Tim Woodyard and K9 Officer Alex trek up Jeff Hill on OHIO's Athens Campus on a snowy Friday in February. Alex made sure to romp in — and lick — the snow along the way. 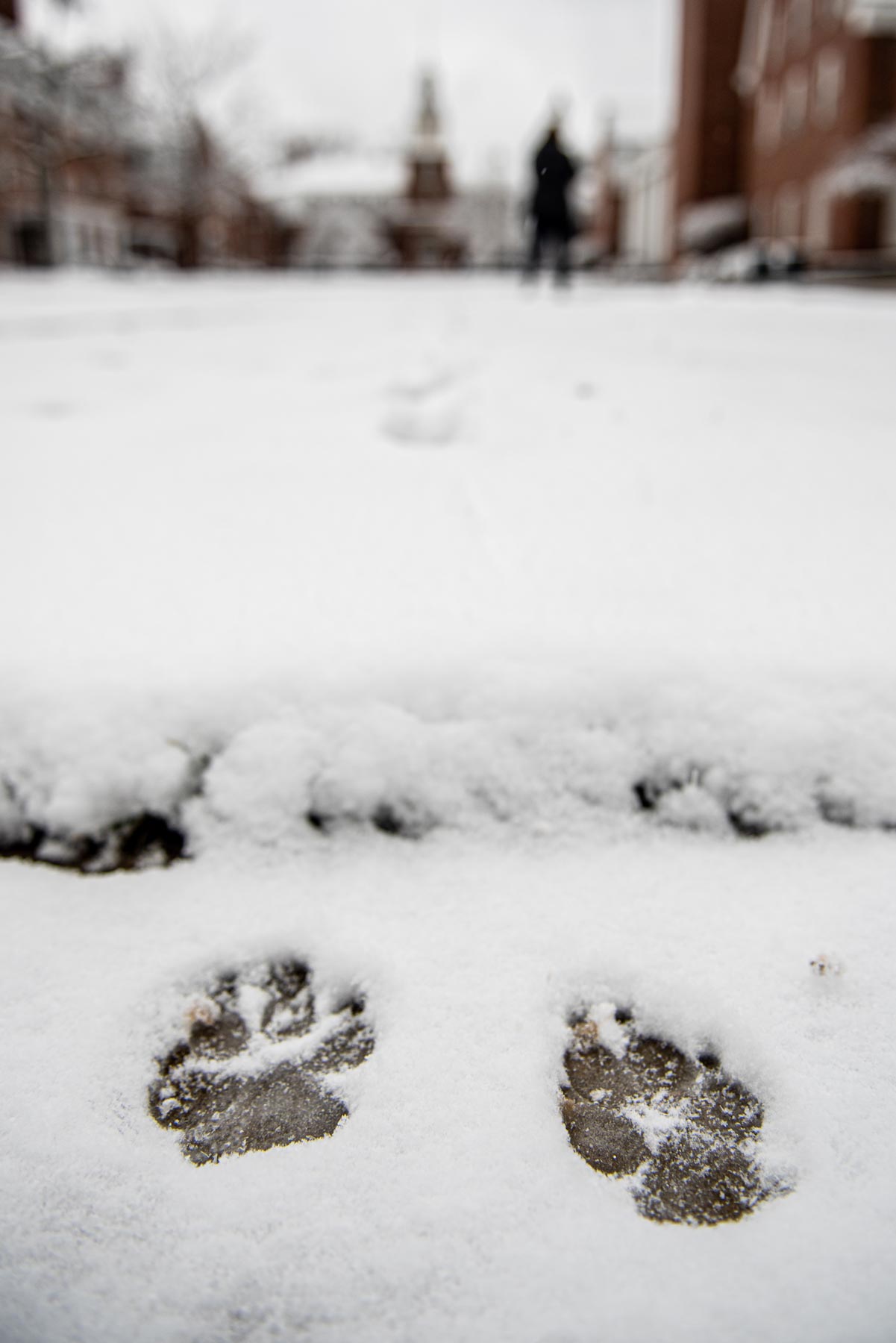 Because the salt for melting snow bothers his paws, Alex makes sure to walk in the snow whenever possible. 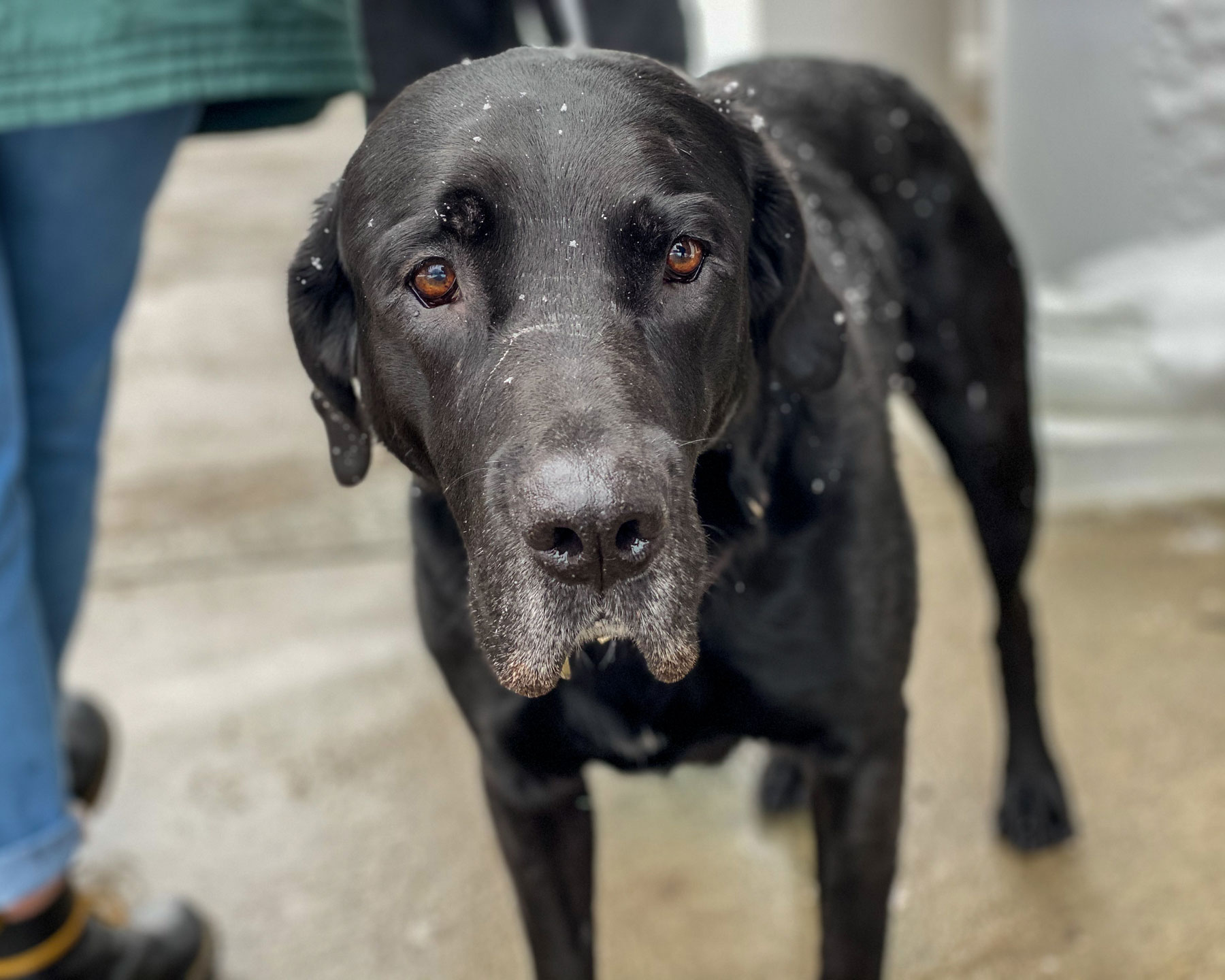 Alex the K9 officer, who was recently voted best law enforcement officer in Athens by the "Best of Athens" competition by Athens News, stands quietly and patiently along Ohio University Police Department Officer Tim Woodyard's side when he stops to chat with folks around campus. 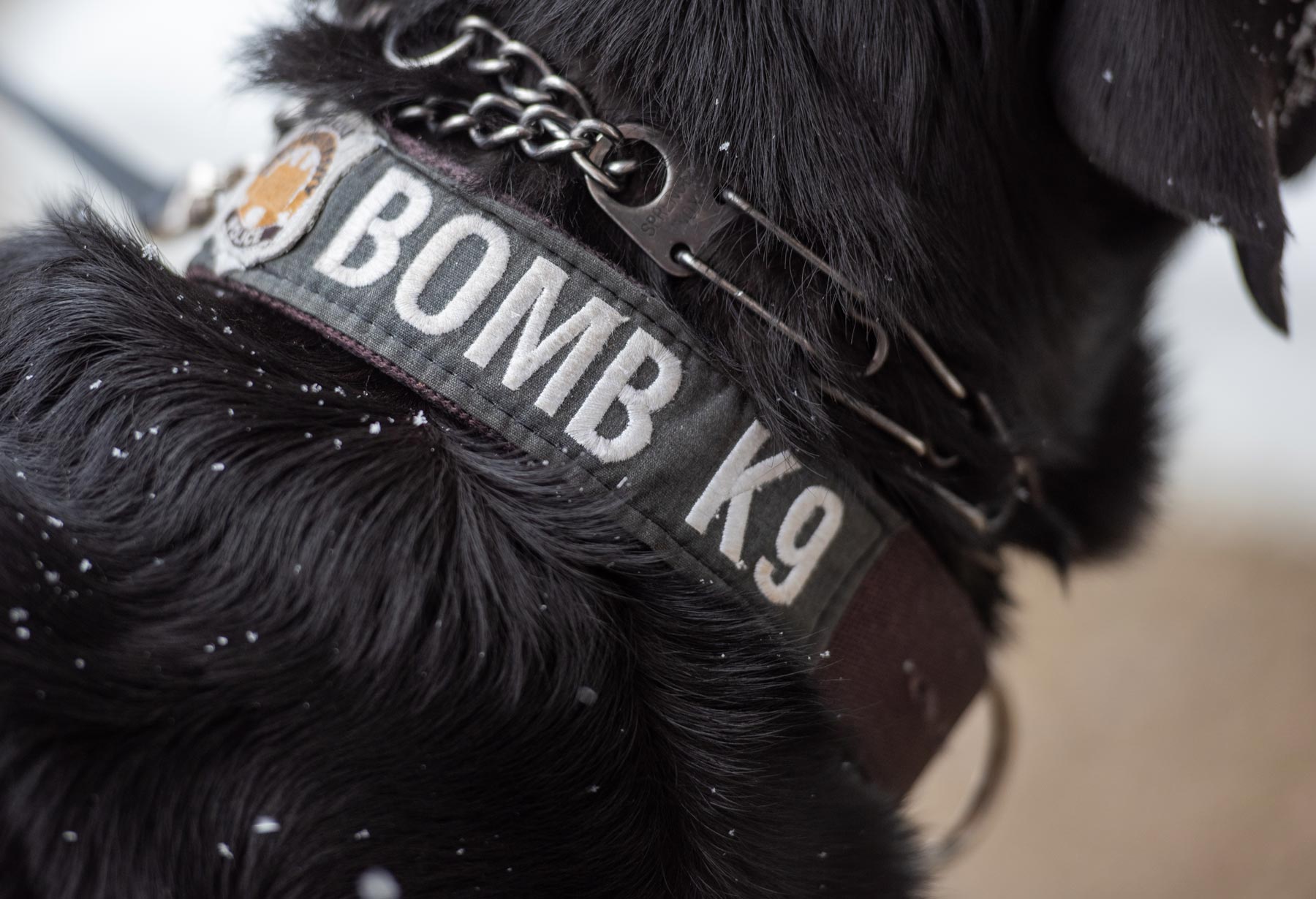 Getting ready for work as a human police officer requires donning the proper equipment and uniform, but for K9 Officer Alex, he just needs his collar. Alex and Ohio University Police Department Officer Tim Woodyard have been partners at OUPD since 2014. Alex was OUPD's first explosive detection K9.

After brushing up on his detection skills throughout the morning on Feb. 7, Officer Woodyard and Alex visited each mail room on campus to make sure the students’ mail and packages were safe before moving on to Baker University Center. They stopped by a few administrative offices to say hi, and continued down the escalators.

All eyes were on Alex everywhere they went. He has that effect on people.

“I’ve never seen a dog go down an escalator,” a student laughed to her friend.

When Dr. Patricia McSteen saw Alex on the next floor of Baker Center, her face lit up. She kneeled down to his level while Alex covered her with kisses.

“Who’s my favorite officer?” she said, rubbing his floppy ears. “That put my blood pressure back down where it’s supposed to be.” 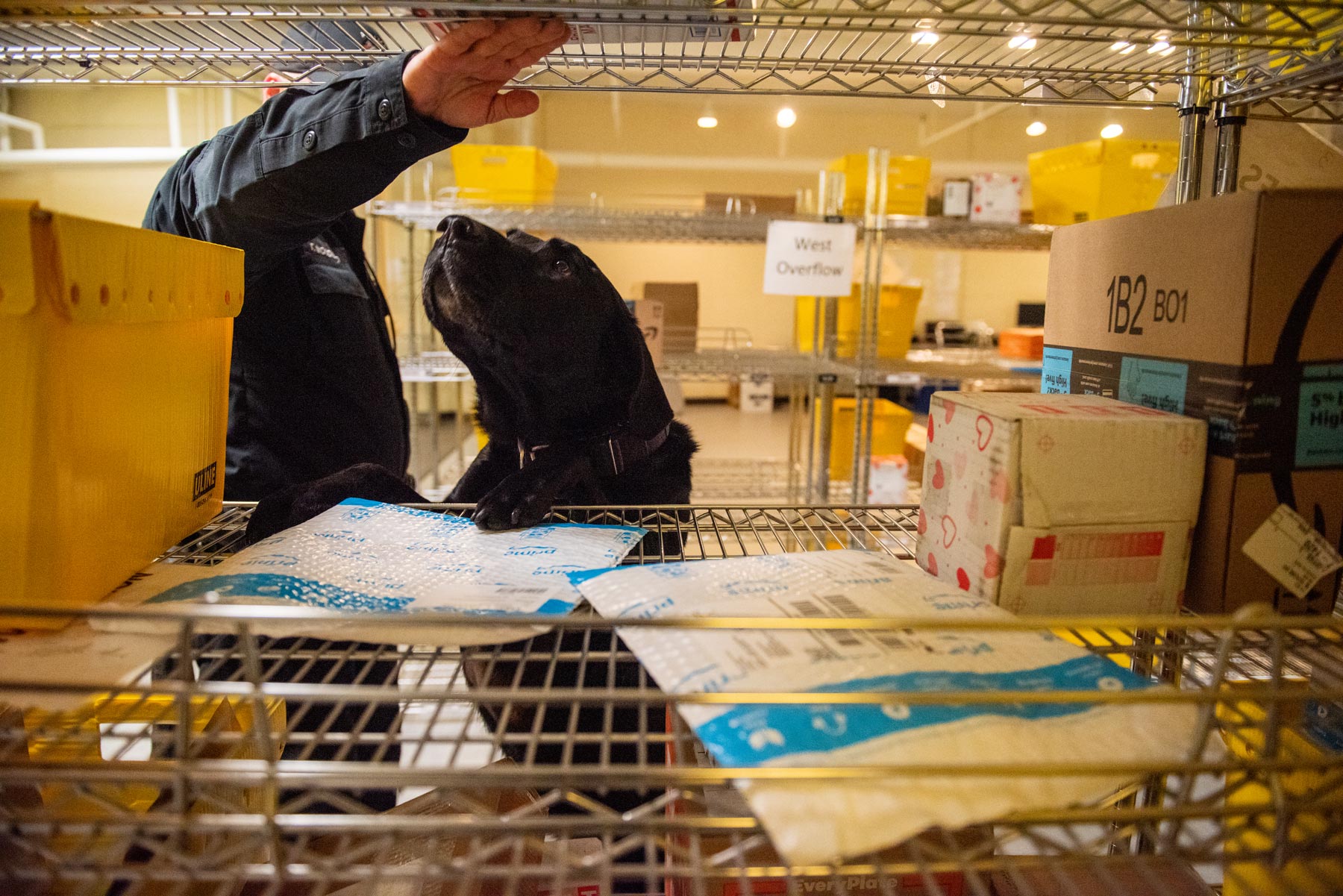 K9 Officer Alex routinely checks dormitory mail rooms on OHIO's Athens Campus, making sure packages being delivered to students are safe. If Alex detects explosives, he starts to salivate and gets very excited because he associates explosives with food. 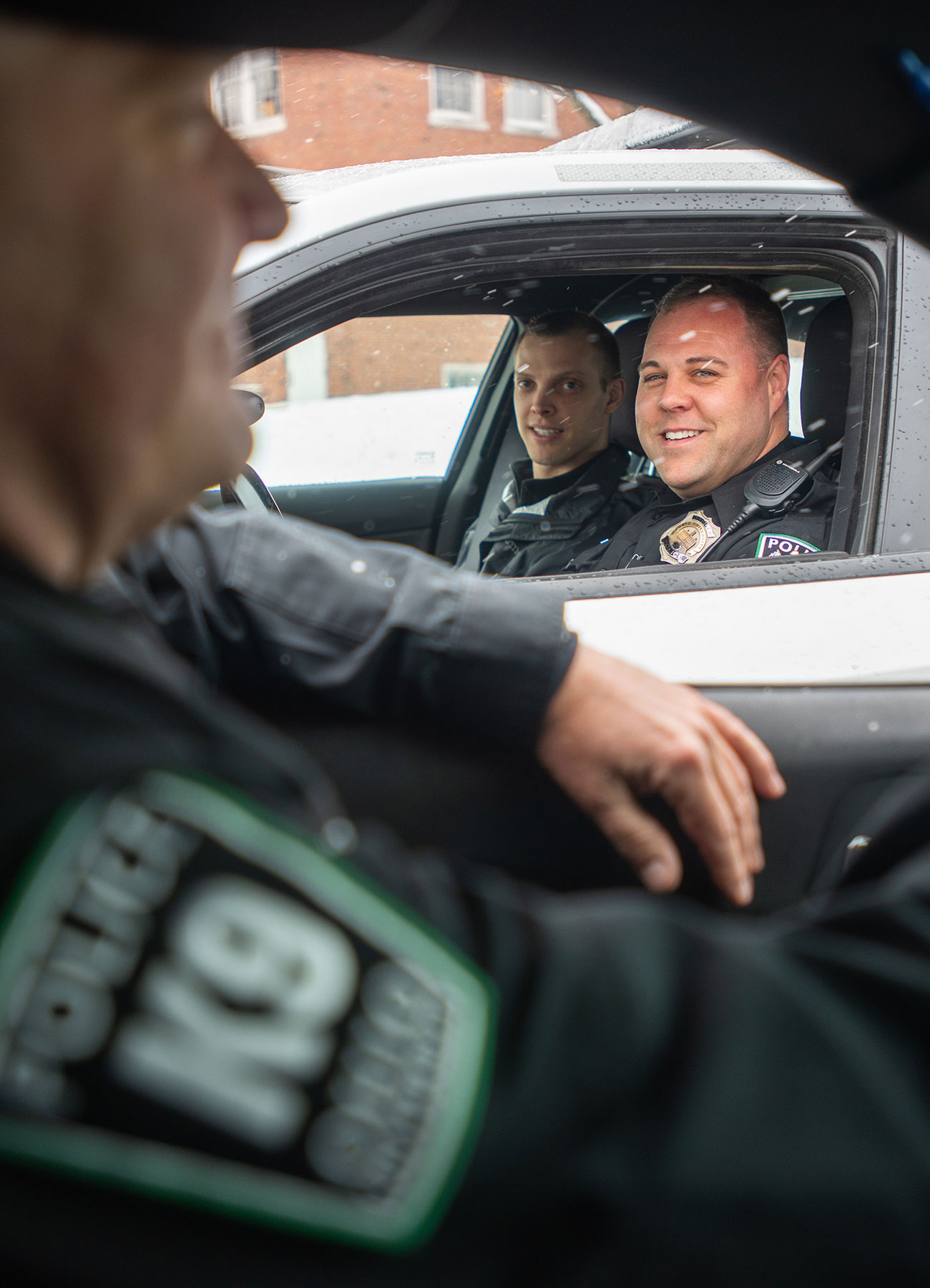 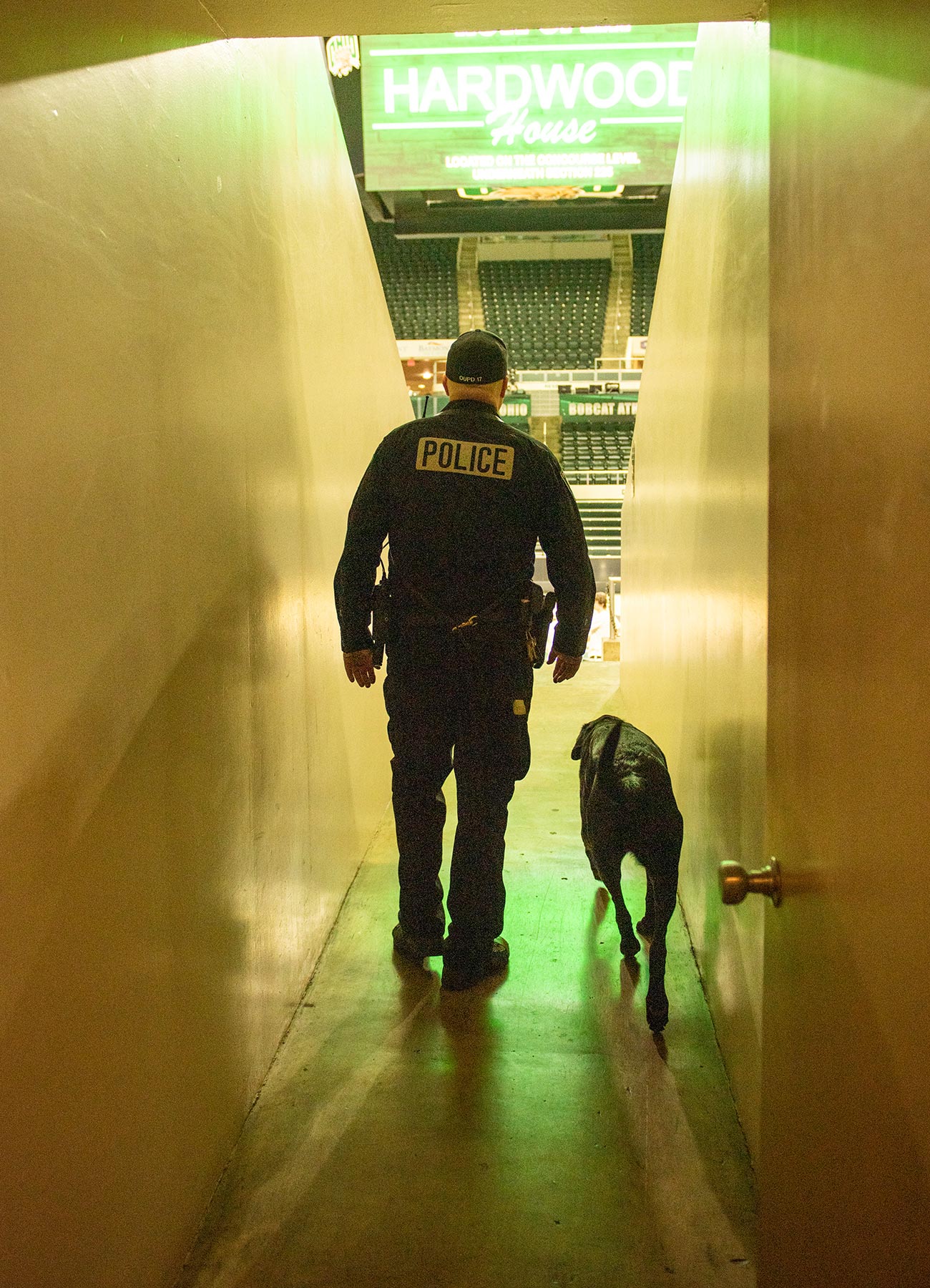 When you show up at a basketball or football game, the last thing you might be thinking about is your safety. But it's K9 Officer Alex's top priority. Here, Alex is seen searching for explosives in the Convocation Center before a game.

Alex and Officer Woodyard stopped by each information desk in Baker Center to visit with students and made their way outside to patrol. The partners, who have been working together at OUPD since 2014, eventually made their way to the rotunda in Walter Hall.

Officer Woodyard unlocked the rotunda door, shut it behind him and let Alex off his leash. Alex proceeded to run around the rotunda not once, not twice, but 11 times. Alex needed to release some energy, despite walking more than four miles before 11 a.m.

His energy and drive are some of the reasons he was selected from the Franklin County Dog Shelter to be a police canine. The shelter staff would always find Alex escaped from his crate in the mornings and knew he was destined for something greater.

But when he’s not off being great, he’s just a normal dog.