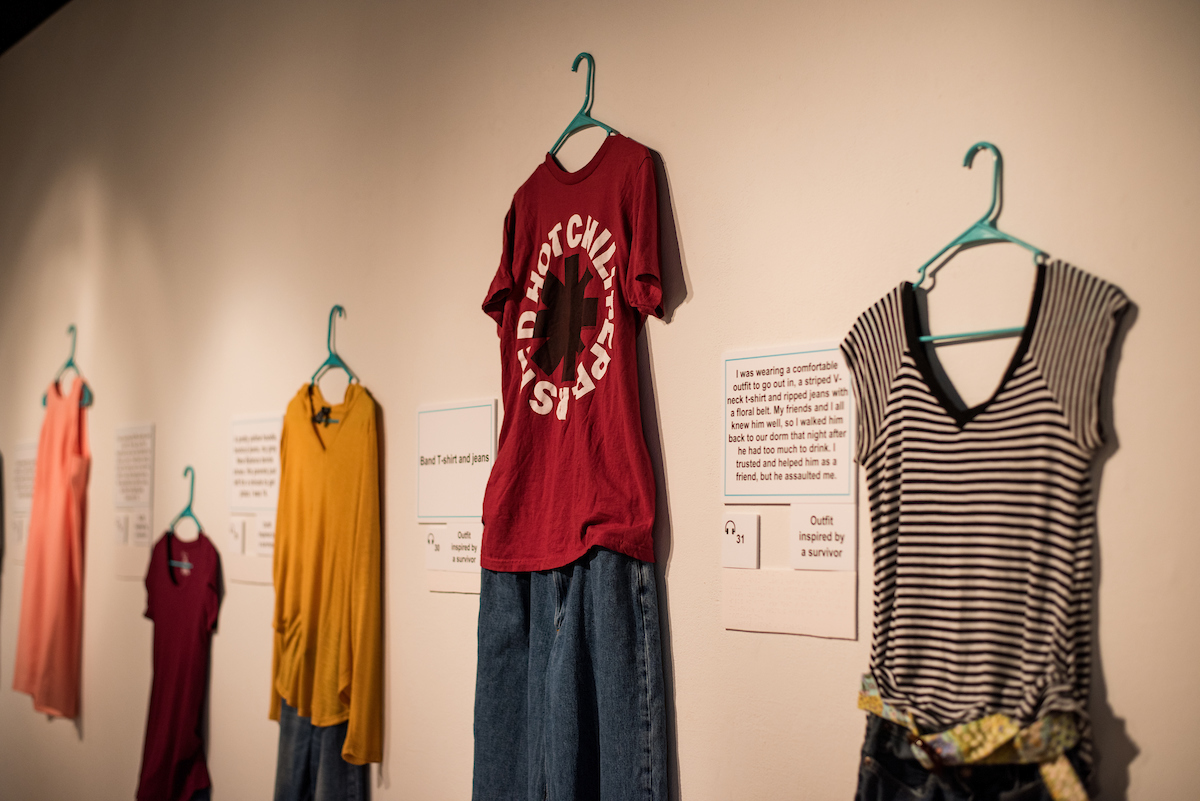 UCM What Were You Wearing

After inspiring thousands of people on the Athens campus to help end sexual violence, Ohio University’s “What Were You Wearing” and “Through the Survivors Lens” art exhibits are now touring the University’s regional campuses and centers in hopes of the same result.

Dr. Pam Kaylor, associate professor of instruction at Ohio University Lancaster, said the “What Were You Wearing” exhibit was visited by classes, faculty, staff, students, and the community while on campus. She added that the annual Take Back the Night rally against violence was held in the gallery during that time.

“What Were You Wearing” was widely received as an educational tool about gendered violence to debunk the myths surrounding victim blaming and sexual assault,” Dr. Kaylor said. “Many viewers were deeply moved by the powerful message and the exhibit evoked a profoundly somber and quiet atmosphere of reflection.”

Dr. Kaylor said it’s important for the Lancaster campus to host these powerful exhibits because no area is exempt from the effects of gendered violence.

“In some of our homes, on our streets and throughout the community, sexual assault and domestic violence have deeply traumatic and widespread effects that are often hidden or not discussed,” she said. “These exhibits create awareness and an opportunity to open a dialogue about what is happening to victims and their families all around us.”

In regards to the current art exhibit on her campus, “Through the Survivor Lens,” Dr. Kaylor said it not only gives the campus insight about the victims and the utter devastation in their lives related to sexual assault and abuse, but it also shows the strength of the human spirit as they tell their stories of survival through photographs.

“We are making it available for all in our area to view and will shine a light on it during our annual Take Back the Night rally against sexual violence on Oct. 22,” Dr. Kaylor said. “Ohio University Lancaster is so grateful for the support of The Women’s Center and for the inclusion of our campus in each of these survivor art exhibits.”

“Not only was “What Were You Wearing” an educational experience, but for many it became personal,” he said. “People could see themselves, a loved one, or their child reflected in the clothing. They realized that it could be anyone and that the idea that someone’s clothing could cause a sexual assault is outdated and false.”

Pleasant said he was contacted by a survivor who wanted to thank Ohio University Southern for hosting the exhibit and many others have given him feedback.

“They shared how important it is for others to see the outfits and to read the stories associated with each article of clothing,” he said. “I believe the exhibit gives survivors a sense of validation. Some of them said it should be mandatory for all students to view the exhibit.”

Pleasant said the “What Were You Wearing” exhibit was one of the most powerful ones to ever visit the Southern campus.

“Whether it was a faculty, student or community member viewing the exhibit, it invoked many strong emotions,” Pleasant said. “One of my goals in having it on campus was to make sure that people are aware that this is a safe place to share their experiences and there is a support system and resources available to assist them.”

In addition to hosting the two traveling sexual-violence awareness art exhibits, the regional campuses and centers are also invited to host a live steaming of the 365 Conversation with Drea Kelly titled, “Creating Public Awareness to End Domestic Violence at 7:30 p.m. Thursday, Oct. 24, in the Baker University Center Ballroom on the Athens campus.

Kelly, the ex-wife of embattled R&B singer R. Kelly, is a sexual-assault survivor who will tell her personal story and share some prevention tips with the audience. A dancer, choreographer and creative director by trade, she rose to fame by starring on VH1’s popular reality TV show, “Hollywood Exes,” where she was branded “the breakout star.”

Faculty, staff or students at the remaining regional campuses and centers who want to view Kelly’s talk should contact the OHIO Women’s Center at 740-593-9625 or www.ohio.edu/womens-center for more information.

“It’s great that we can provide survivor-centered programming to participating RHE campuses in person and virtually,” said Dr. M. Geneva Murray, director of the OHIO Women’s Center. “It helps people understand the various ways that we can support the students and staff at the regional campuses and gives them access to the same programs that we have for Athens students.”

Dr. Murray said there are two additional ways to interact with Kelly during her Oct. 24 visit to Athens:

Tags:
global women deliver conference
what were you wearing
through the survivors lens

Survivor Advocacy Program: Three full-time licensed professional social workers serve our students throughout the year. They have a crisis hotline that is available 24/7 at 740-597-SAFE (7233).

Ohio Health Campus Care: The OhioHealth Campus Care clinic, located on the 1st and 2nd floors of Hudson Hall, has trained, confidential clinicians who offer a wide range of services. The quick care clinic is open Monday through Friday from 8 a.m. to 5 p.m.

If a student wishes to report an incidence of sexual misconduct to the university, they can contact Equity and Civil Rights Compliance at 740-593-9140 or equity@ohio.edu.

If a student wishes to make a criminal report regarding sexual violence, for incidents occurring on campus, they can contact our Ohio University Police Department, 911 (emergency) or 740-593-1911, Scott Quad 135 or police@ohio.edu.

If a student wishes to make a criminal report regarding sexual violence for incidents occurring off-campus, they can contact the Athens Police Department: 9-1-1 (emergencies) or 740-592-3313.