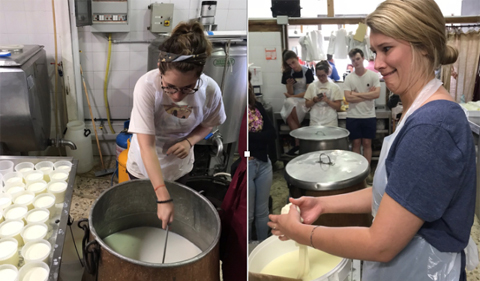 Each May, Dr. Theresa Moran, Director of the Food Studies theme, and Dr. David Bell, Associate Professor and Chair of Linguistics, lead a group of students to Italy for the Food in Sicily study abroad program, based in Ortigia.

Early one morning this past summer, faculty and students took vans for the brief journey over the bridge to Siracusa and up Viale Santa Panagia to La Ricotteria. It was a clear morning, and they could see Mount Etna some 60 miles ahead.

‘Real Cheese Is Worth the Work’

Fabio Gennaro, owner of La Ricotteria and master cheesemaker, greeted the students, directed them to the sinks to scrub their hands, and then gave them plastic aprons. Gennaro lighted the flames under two large copper cauldrons. Into one cauldron he poured 50 liters of milk fresh from the dairy that morning. This would be for mozzarella. And into the other he poured whey, the liquid remaining after milk has been curdled and strained from the previous day’s mozzarella making. This would be for ricotta.

As Gennaro demonstrated the process, Moran translated into English. As fresh milk heated slowly in the large copper cauldrons, rennet, a coagulating agent, was added to form the curds. This is where the students took over stirring the curds until they formed strings (hence the term mozzarella “string cheese").

Ricotta doesn’t require any stirring. The whey is heated, salt is added, and the whey is held at 185°F until the ricotta rises. The curds are allowed to rest for 10 to 15 minutes and then ladled gently into molds and left to drain.

Both processes take several hours. The trick with mozzarella is to stir with careful movements so that the curds don’t adhere to the bottom of the cauldron. Gennaro explained that making cheese is a labor of love and the cheesemaker must pay attention at all times.

“I had no idea cheese making was such a lengthy process,” said Peyton Cantrell. “We stirred slowly in a counterclockwise direction and then down the middle of the pot. If someone wasn’t doing this correctly, Fabio and his nephews would stop that person and show them how to do it the right way.”

“Fabio didn’t speak any English,” said Paige Kirby, “but he was quite talkative and tried his best to interpret with hand motions. It surprisingly worked, and we needed little translation. For a moment it really didn’t feel like we spoke different languages!”

Emma Kokaska noted, “It was really great how the guys who were making the cheese were really patient with us and helped us learn along the way.”

“I loved being able to actually stir the ricotta and mozzarella,” added Lindsay Stanton.

Paige said that although “we did get a bit bored at times … there were these moments … I will never forget.”

‘Fabio Took Notice of Our Dancing and Decided to Join in’

“We had the best time dancing and singing along to the radio while we learned how to make and churn the cheese,” Kokaska explained.

At one stage, Paige Kirby recalls, “They began playing Latin music throughout the shop and we all had been dancing around for quite some time. Fabio took notice of our dancing and decided to join in. He took Sefi Monterosso (on-site coordinator for local provider Exedra Mediterranean Center) into his arms. We all stood around and watched the two salsa dancing around the flames and the boiling pots of cheese-milk. It was incredible and so were they.”

By mid-morning the cheesemakers were hungry, so Gennaro decided that it was time for a spuntino, or snack.

Moran took over on the slicing machine to cut some waver-thin slices of prosciutto and mortadella. Gennaro put the ham and mortadella into a panino, squeezed lemon onto the meats and then sliced the panino into small pieces.

“The sandwiches were delicious,” Lindsay Stanton recalled, “I loved the one that had mortadella and lemon on it. I would have never thought to put so much lemon on a sandwich, but I loved it and will definitely do that in the future.”

Once the curds became elastic in texture, they were stretched and kneaded until smooth. Then Gennaro grabbed the mozzarella and pulled it through his hands several times to form a ball.

This was not as easy as it looked, Peyton recalled. “My classmates and I each attempted this technique, and it was surprisingly hard to do, but after a couple of tries, I got the hang of it.”

The cheese-making process took more than three hours, and by noon Gennaro’s customers were lining up to buy the fresh mozzarella and ricotta for lunch.

‘An Experience and Taste of a Lifetime’

And the cheesemakers were hungry again. So, Gennaro tucked sliced prosciutto into the bocconcini or “small-mouthful” size mozzarella balls that the students had just made.

“The best tasting and freshest mozzarella that I’ve ever had in my life,” Kokaska said.

And for Matti Brammer, “It exceeded all my expectations…. I’ve never tasted cheese that yummy.”

Kirby described the cheese as “the most delicious, warm, fresh, and dreamy thing I have ever tasted.”

When it was time for the students to say farewell to Gennaro and La Ricotteria, they headed back to Ortigia and contemplated what they had just experienced.

For Erynn Levan, “The process of making food from scratch gave me a different appreciation for cooking.”

“It blew my mind the amount of effort that truly goes into cheese making. It was such a fun time and I learned a lot,” added Stanton.

Kirby summed it all up, “An experience and taste of a lifetime.”