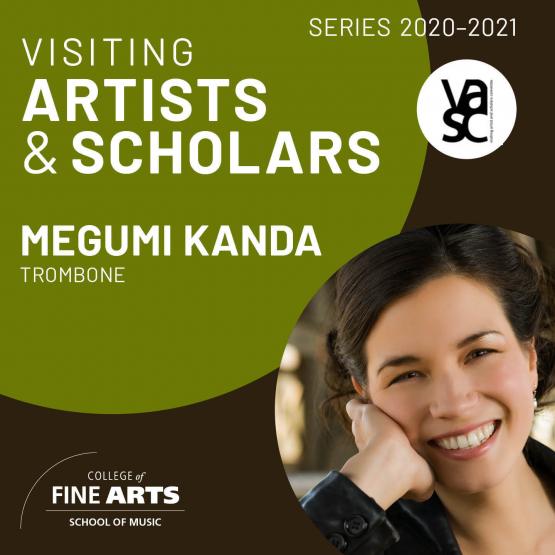 Throughout the day, there were six sessions including a group warm-up, a master class with Kanda, a guest lecture with Jason Sulliman, a Q&A for prospective OHIO undergraduate and graduate students, a clinic on instrument maintenance with John Deavers, and a pre-recorded recital performance from Kanda and the OHIO Trombone Choir.

“Trombone Day is a great opportunity to meet other students, both young and old, who are passionate about music and improving their abilities on trombone,” wrote Sulliman. “Virtual events offer a challenging limit of face-to-face interaction but do expand the scope of potential participants to a global community.”

Lucas Borges, associate professor of Trombone, emphasized a theme of “silver linings” when reflecting on Trombone Day and its featured guest. He sought to bring Kanda to Trombone Day over the past two years, but scheduling conflicts made it impossible until this year when Trombone Day was moved to a virtual platform.

“The words that come to mind when thinking about Kanda as an artist are perseverance and discipline. She shows that,” says Borges. “Kanda broke the glass ceiling of stereotypes that surround women trombone artist with the beauty of her playing. A takeaway from her master class and recital is the expressiveness of her playing and how much one can say through an instrument like she does.”

Kanda is the first female trombonist to be the featured guest during Trombone Day, Borges says, and he sees Kanda as an artist who can truly show what a trombonist is capable of artistically and emotionally.

“It was inspiring to hear from a professional female trombone player,” wrote Emily Justice, president of OHIO Trombone Society. “Even though Trombone Day was virtual unlike years past, we were able to record our largest attendance numbers and have a world-renowned trombonist work with OHIO students.”

Kanda has been Principal Trombone of the Milwaukee Symphony Orchestra since 2002. She has performed as a soloist across the United States, Europe and Asia, including with Pershing’s Own Army Band, US Army Field Band, and the Prague Chamber Orchestra. In 2006, Kanda was recognized by the Arion Foundation in Tokyo, Japan as one of the most influential Japanese classical artists. In 2017, she was named Woman of Influence in the category of education by the Milwaukee Business Journal and in 2020, she received the International Trombone Association Award which recognizes the highest level of creative and artistic output. The Consulate General of Japan at Chicago awarded her a Certificate of Commendation in recognition of distinguished service contributing to the friendship between the United States and Japan.

In 2020, Kanda finished her second book, Trombone Unlimited (Encore Music) a comprehensive trombone method book. She is developing a recital program that includes world premieres as well as a concerto for the International Trombone Festival being held in July 2021. Meanwhile, The Milwaukee Symphony has resumed performing, producing a mostly virtual season, at their brand-new concert hall, the Bradley Symphony Center.

“My life experience is everything in my performances and teaching,” Kanda stated via email. “Some of my big challenges that I had to overcome include extreme performance anxiety, a lip injury, and a metal allergy. In order to survive and thrive through those challenges, I’ve gained wisdom, humility, gratitude, and understanding for others. Because of my story and wisdom, I need to teach.”

Kanda held a virtual master class with OHIO trombone students prior to Trombone Day. Following OHIO’s COVID-19 protocol, six students performed live in Glidden Hall while Kanda and their classmates joined via Zoom. The six students played pieces they are preparing for upcoming recitals or auditions and received feedback from Kanda.

“Musicians can never quit our pursuit for excellence. Whenever possible, we should try to not use the pandemic as an excuse but as an opportunity to learn in a different way,” wrote Kanda. “This is true for much adversity, that there is frequently a silver lining, but it can be difficult to see.