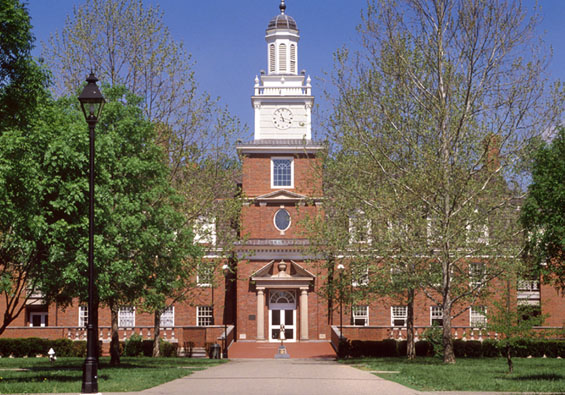 Stocker Engineering and Technology Center is located in the West Green, coordinates E-3 on the campus map. It is marked as #120 on the map.

Stocker Center provides more than 3.5 acres of classroom, laboratory, lecture hall, and office space. A high-technology computing and communication network is available for transmission of voice, data, and video, linking the departments. Other features include computer-aided design and computer-aided manufacturing networks, a rooftop area for outdoor antennas and solar experiments, and energy-efficient heating and cooling systems.

Built in 1965, the building was originally known as West Green building number 7, before it was named Crook Hall and was used for a dormitory.

The building was renovated, and in April, 1986, the new C. Paul and Beth K. Stocker Engineering and Technology Center was dedicated. The building was further expanded in 1995.

The C. Paul and Beth K. Stocker Engineering and Technology Center is named in honor of the late C. Paul Stocker, class of 1926, and his wife, Beth K. Stocker, class of 1928. Mr. Stocker was an inventor and the founder of Lorain Products. He was a member of the College of Engineering and Technology Board of Visitors and honorary chair of the Ohio University 1804 Fund. He served as a member of the University Board of Trustees and was a member of the university's OU Fund, Inc. Two of the most loyal and dedicated alumni, they were creators of an $8 million Stocker Endowment in support of engineering.