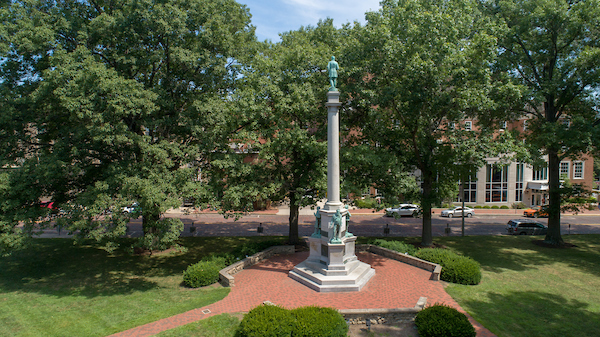 This location does not have a number
on the campus map

The Soldiers and Sailors Monument stands near Court Street in Athens Ohio as a memorial to the 2,610 citizens of Athens Ohio who served in the Civil War. The monument was erected in 1893.

The Soldiers and Sailors Monument was erected in 1893 in memory of the 2,610 citizens of Athens Ohio who served in the United States Civil War. A plaque on the monument reads:

The people will ever remember how much our national prosperity is due to the patriotism and valor of the men who died in service to their country.

“The people of Athens County erect this monument in memory of those who volunteered as soldiers and sailors in defense of the union and to perpetuate free government.”

The monument used to include a pyramid of cannon balls and a canon. These relics are no longer seen at the site. During World War II, the government had to melt down the cannon balls to use as artillery.

The monument is located on the College Green (commons) of Ohio University. Ownership of the commons had been a point of contention between Athens and Ohio University for decades. The University wanted the property deeded over to them, but Athens residents argued that the land was useful as a pasture for their livestock and as a drilling ground for the militia. Eventually, General Charles Grosvenor led a group of Civil War veterans in raising money for the monument. The village council released the land while the University agreed to maintain the monument.