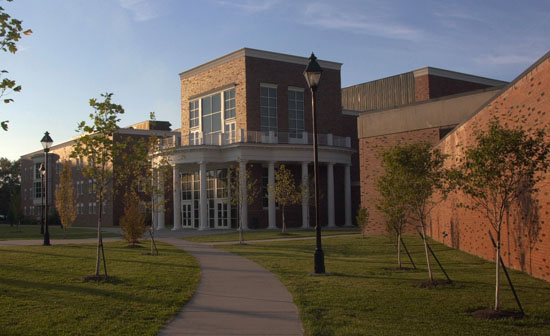 Grover Center is located in the South Green, coordinates F-5 on the campus map. It is marked as #111 on the map.

The building includes over 50 classrooms and specialty labs, seating for nearly 1,600 and about 150 faculty and staff offices. Special features include a distance learning room, internet and projection technology in every classroom, a 24-station computer lab, and the Marion Parson Alden gallery for the display of student design projects.

From 1996 to 2001 the building was renovated at a cost of $24.5 million, boosting the size to almost 200,000 square feet. Besides the concrete foundation, thick steel beams above what used to be the gymnasium, and a few other structural features, hardly any of old Grover remains.

At the heart of the new Grover is an expansive atrium with a wide, circular stairway winding to the third of three floors. On each floor, the atrium opens up to program entrances that, along with skylights and old-sytle lampposts, lend a streetscape feel. The brick exterior mimics the Georgian flavor seen elsewhere on campus.

Grover Center is named in honor of Brandon T. Grover. A 1919 graduate of Ohio University, he joined the coaching staff at Ohio University in 1920, and served as head basketball coach and assistant to the athletic director from 1923 to 1938. He left the athletic department to become director of public relations and assistant to the President John C. Baker. He authored a book on a constitution and by-laws for 12 sports. The book was adopted by athletic directors of many universities.