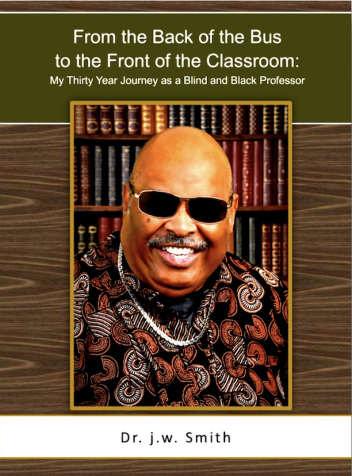 Dr. Smith will discuss his new book, “From the Back of the Bus to the Front of the Classroom: My Thirty Year Journey as a Black and Blind Professor,” at Little Professor Book Center, 65 S. Court St. in Athens, October 4, 4-6 p.m. The following are excerpts from a conversation with Adam Maslowski.

What made you want to become a professor?
It’s 1979. I changed my major four times while I was an undergraduate and didn't know what I wanted to do. I was sitting in a communication studies class. And this teacher named Dr. Camille Schuster was teaching, and I was sitting there just mesmerized by her. It was, like, on a Thursday afternoon, and I was sitting on the right side of the room, face to the desk and to my right was a window and the curtain was open. The sun was shining brightly. And it was almost as if, like, a voice came to that window and said, “This is what you want to do.” And I made up my mind from that day that I want to be a professor just like her. And I knew that would require getting a PhD and I committed to it, from that day, to getting it.

How did you feel writing this book compared to writing your other works, such as “From the Pit to the Palace: Strategies for Discovering His Purpose” and “Your Destiny, Communication and Campaigns,” or the articles in The Braille Monitor?
[From the Pit to the Palace] was sort of my religious side, you know, as a minister and gospel singer in my work in the church. And this, I wanted to do as 30 years of being a professor, right? Walking into my first classroom in January, 1989. And thinking about it, I said ‘I want to limit this to my academic work.’ I’ve got all these hats. You know, I’ve got the religious side, the academic side, the musical side. So that's why the focus here was on my professor life.

What takeaways do you want readers to have when they read your book?
I have two takeaways: One, how someone with my intersectionality that is differently abled—blind since birth—a black child raised from the South side of Chicago, can grow up and have a meaningful life, a wonderful family and a wonderful career. And the second thing I wanted them to take away is that I wanted them to leave with a positive taste in their mouth. Like, I don’t want sadness. I didn't want the book to be vitriolic, you know? Full of anger and all that kind of stuff. I want them to leave with: “This is a guy who's had a good life and is having a good life.” As Barack Obama once said, “Only in the United States is my story possible.” That's what I want them to get out of my book.

When you were a radio announcer, what station were you on?
There were a couple, but I was in one in Gary, Indiana, in the Chicago land area. The station was called W-GVE. It was like the education station of Gary; I did a show there, “So you want to go to College?” talking about college prep. And then I used to be at an old station called W-WCA. And I used to do a radio show there. They're focused on youth, empowerment, and faith building. I did a little bit in Detroit as well, but not as much.

When did you start singing?
I was 10 when I first started. My brother and I started singing; we did gospel. And I started playing guitar, loved it, then took piano lessons and loved it. My brother and I started going around the country to churches singing and developed quite a little following. And that's when my musical career started. Then he went off to the Marines. And we basically split up when I was around age 20. I was 20 when I started my solo career. I was singing mostly gospel but in the last 20 or 30 years I branched out to more R&B and other things as well.

What types of books are you reading today?
I love suspense and I love books about assassins. I love David Baldacci and James Patterson. But the book I'm currently reading now is about beep baseball because one of the OU professors wrote it. I used to play it too. It's great. So that's what I'm reading right now. But I love books about assassins and political intrigue. I love Baldacci. He's my favorite author. He just holds my attention.

You’ve worked at Ohio University for 20 years; what makes you stay here?
It’s in the book. There’s a chapter entitled “How I got to Ohio and why I stayed.” The short version is I didn't know anything about Ohio University or know anything about Athens. I came down to interview, fell in love with the place and more importantly, with the people. As Paul Harvey would say, “Now you know the rest of the story,” but you’ve got to get the book really get the essence of it!

You have over six pages of content citing a variety of articles, presentations, and publications. Do you have any favorites on that list?
“The Pit to the Palace” was just so rewarding. Another one I liked a lot was an article in the Braille Monitor. It’s called “A Rhetorical Analysis of the Annual Banquet Address.” That's a wonderful article because I sat on that content for 20 years. I recorded these phone interviews with the two principle people in like 1995 on this little micro cassette, right? And I kept that damn thing for like 20 years, kept saying I’ve got to get to it, I’ve got to get this done. After a while, all the technology changed and I had to go through, like, getting the content put onto a CD, and then getting it transcribed and then hopefully getting it published. When that thing came out in 2016, or whatever it was, it was like, wow. Twenty-some years I've been sitting on this, and that was rewarding.