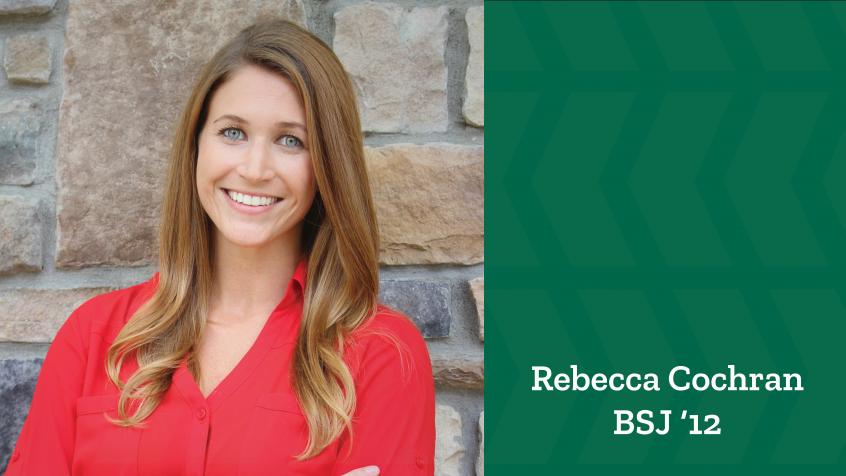 What do you do? I work within Scripps’ corporate communications team, where I support PR and other strategic communications efforts for Scripps’ portfolio of local and national media brands: Scripps has 52 television stations in 26 markets and runs a collection of national journalism and content businesses, including Newsy, the cross-platform news network and podcast company Stitcher. I also work closely with the Scripps Howard Foundation, which has a longstanding relationship with the college and J-School, to help them share the stories of their investments in journalism education (through the Scripps Howard Awards and the Howard Centers for Investigative Journalism, for example), community giving and childhood literacy.

What made you come to Ohio University? Were there other places you considered? There were two things: I loved the campus. With several family members who had attended Ohio U, I grew up traveling over to the Athens area, and, from South Green to College Green, it always felt like “home.” Once I knew I wanted to study journalism, I couldn’t envision spending those four years anywhere else.

How did the Scripps College of Communication equip you with the skills you needed to succeed? I was encouraged by the college to be curious and to step outside the box with my education. When I entered the college in 2008, I enrolled in the magazine journalism sequence. However, I was beginning to see that there wasn’t just one way to tell a story, with journalists utilizing different tools and platforms to bring meaning to our world. The college allowed me to craft a program that drew from magazine, online and broadcast journalism, as well as public relations and documentary filmmaking. Taking classes across the college like this gave me a holistic experience, with the encouragement and freedom to pursue everything I was interested in while preparing for the realities of a changing communications industry.

What about your experiences here was so memorable? It was all memorable—down to the last brick. There’s a certain kind of comradery alive at Ohio U. My working suspicion is that its rooted in College Green, at The Gateway. Walking through it, I always felt reminded of what was important: “So enter that daily thou mayest grow in knowledge wisdom and love.” That sentiment seemed to echo across campus, whether it was the professors and staff of the University, fellow students I learned to lean on, or the people who called Athens home. (Beyond those things, of course, no less memorable was the time spent with friends and Athens food! I crave Casa salsa daily, along with the Tom Turkey at Bagel Street Deli and the pancakes at Village Bakery. And Miller’s Chicken!)

Tell us about your career path. My path has been a bit nonlinear, to start, but I have found that life has a funny way of connecting the dots! I worked at the Voinovich School for three years during my undergraduate at OHIO as a writer/researcher. From there I landed in Washington, D.C., doing a summer internship sponsored through the Voinovich School with the International Economic Development Council. I then completed a yearlong fellowship with the Legislative Service Commission in Columbus, Ohio, after which I stayed on for a year as a legislative aide with the Ohio Senate. After two years in Columbus, I moved back down to my hometown of Cincinnati where I spent three years in communications/external relations for a nonprofit called The Health Collaborative. I’ve now been with The E.W. Scripps Company for a little over a year as part of the corporate communications team.

What advice do you have for current students? Be curious. Do more than just attend class: maybe that means participating in student media, student government, clubs or working for a department different from the one that houses your major. Maybe it means venturing off-campus to view people and places through a different vantage point. Ohio University is a bit of a petri dish and a great place to explore the world beyond the walls of the classroom. Also, don’t give up after the first hurdle: that’s part of the process!