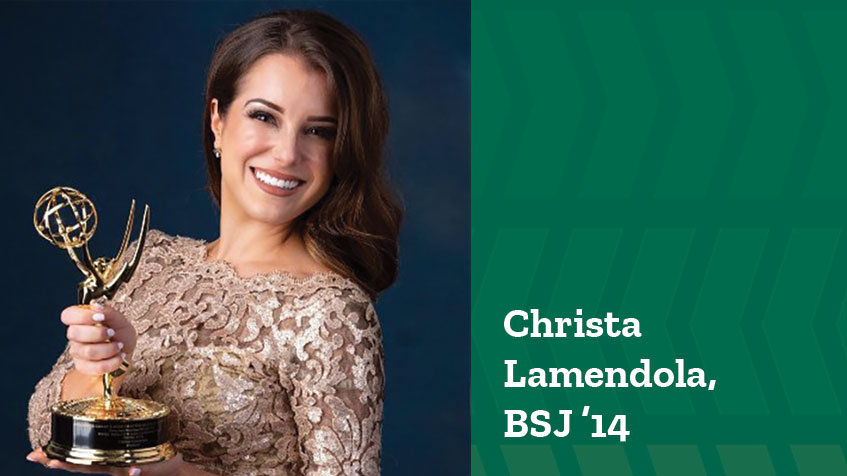 What do you do? I’m a morning anchor and a multimedia journalist. On a normal day, I wake up at 2:30 a.m., anchor a two-hour newscast, and then shoot and edit news packages for the morning show.

What made you come to Ohio University? Were there other places you considered? I was on the hunt for an impressive broadcast journalism program. Many of the schools I looked at in Pennsylvania only had journalism or communications degrees available. Some schools like Syracuse were absurdly expensive for my budget. OHIO offered more scholarships for out-of-state students, and it was picturesque with the brick roads and huge trees. Kent’s campus just didn’t compare.

How did the Scripps College of Communication equip you with the skills you needed to succeed? During my first quarter, Scripps launched a new program for freshman. My first week of college I was Skyping with professionals in the business and editing video. To this day, I still use the skills from OHIO’s notoriously difficult grammar class. It proactively helped me avoid rookie mistakes. I promise you, there is nothing worse than a horrible typo airing on live TV.

What about your experiences here was so memorable? WOUB was an invaluable part of my college experience. I remember reporting LIVE during the Obama campaign rally, standing next to huge network reporters. The live experience and daily newscasts made me stand out for internships and in my first market. Plus, the WOUB network is a strong one. While my co-anchor is 10 years older than me, he, too, went to OHIO and spent his days at WOUB. It’s a small world, and we learn to trust OHIO grads in the news world.

Tell us about your career path. Throughout college, I worked at a radio station in Pittsburgh in promotions. My first on-air job was as a multimedia journalist in Lansing, Mich. Being a multimedia journalist means you are your own reporter and cameraman, a challenging position when you also like to wear heels. I wanted to transition into anchoring, so I took a weekend anchor position close to home in Youngstown, Ohio. After a few months, I was promoted to morning anchor. Since taking the job, I’ve received six Emmy Award nominations and one Emmy Award. I’ve really enjoyed the creativity that comes with a smaller TV market.

How has your work life and or focus changed due to the spread of COVID-19 in the U.S. and resulting precautionary measures? In our morning show, we conduct three in-studio segments live per day. Those segments are now live Skype interviews and have shifted from lifestyle segments to hard news segments. Our reporters now prerecord for our show instead of going live at 5 a.m. Both anchors stay in studio, but we deliver the news from separate desks. We try to work from home after the newscast. Ironically, that’s been an easy transition since almost all of our interviews for news packages can be done through Skype or Zoom.

What advice do you have for current students? Focus on your resume reel, and try to show the viewers something in each standup. Instead of showing the snow behind you, pick up a snowball and bring it close to the camera so we can get a good look. Internships are a great way to get visual newsworthy stand-ups with a photographer who will help you look good. When it’s time to apply for jobs, connections are key! Check out the station bios when you see an opening. If there’s an OHIO grad on staff, email them! The news director is more likely to see your reel if it’s in an email from an employee than if you apply among thousands to the company website. I promise you, Bobcats are always excited to help!