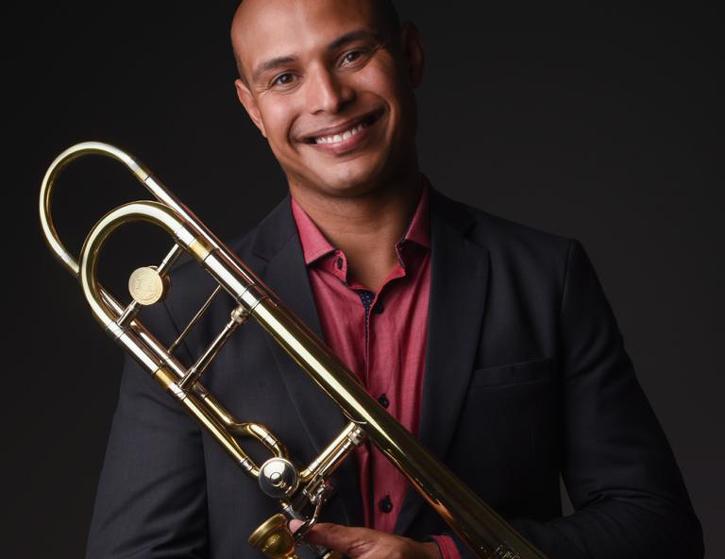 ​Please contact Dr. Borges (regoborg@ohio.edu) with any questions you may have.

José Milton Vieira has performed as a soloist in several locations worldwide, including the most significant cities in his native Brazil, as well as the United States, France, Switzerland, Cuba, Germany, and Italy. In 2018 he appeared as a guest artist at the International Trombone Festival in Iowa, where he played Johan Meij’s “T-Bone Concerto” with the Army Field Band, featuring the composer himself as the conductor.

The winner of numerous national and international music competitions, José Milton won the First Prize and the Public Award at the 26° Concorso Internazionale Città di Porcia (Italy, 2015), the First Prize at the Lewis Van Haney Philharmonic Prize Competition, in Paris (ITF 2012), the First Prize in the soloist category of TV Cultura’s Pré-Estreia (São Paulo, 2012) and the Second Prize at the Concurso Radegundis Feitosa de Solistas de Metais (Belém, 2012).
Additionally, he was awarded the Best Interpretation prize in the commissioned piece “Is My Shoe Still Blue,” by Christian Muthspiel, at the 64. Internationaler Musikwettbewerb der ARD (Germany, 2015).

José Milton has taught master classes in several Brazilian cities and also internationally. Since 2017 he has been a visiting professor at the Escuela Vincente Alscone in Montevideo. He has also been a guest professor at the Festival Internacional de Verão da Escola de Música de Brasília, Festival Internacional SESC de Música de Pelotas, Festival de Música do Pará, Urubrass in Montevidéu, and Latzsch Trombone Festival, among others. José Milton Vieira studied at the Escola de Música de Brasília, the Universidade de Brasília and the Universidade Federal do Rio Grande do Sul. In April of 2012, he was granted a sponsorship by the U.S. Consulate General in Brazil to be a visiting student at the Julliard Music School, having professor Per Brevig as his mentor. José Milton Vieira’s primary teachers were Paulo Roberto da Silva, Carlos Eduardo Mello, and Lucas Borges.

José Milton has been the principal trombone of the OSPA since 2006. More recently, he became a member of the Quinteto Porto Alegre, and a teacher at the Conservatório Pablo Komlós and on the online platform Play With a Pro. In 2019 released is a debut album “Plural” including works from Brazilian and international composers. José Milton Vieria is a Thein-Brass Artist.

Concerts Free and Open to Public