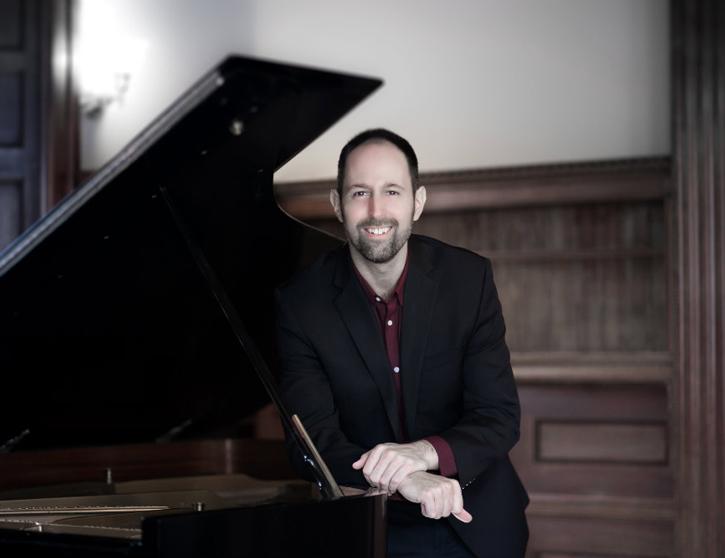 Free and Open to Public

Lauded for "superb playing" and "poised, alert musicianship" by the Boston Globe, and labeled "definitely a man to watch" by London's The Independent, American pianist SPENCER MYER is one of the most respected and sought-after artists on today's concert stage.

Adding to his North American credentials, Spencer Myer includes in his current season returns to the Boise and Northeastern Pennsylvania Philharmonics and Traverse Symphony Orchestra. His solo recitals and chamber music collaborations take him throughout the United States, and he continues as half of the Daurov/Myer Duo, having teamed up with the award-winning cellist Adrian Daurov in 2012. Of special note is an appearance with Jamie Bernstein at Washington, DC’s National Museum of Women in the Arts for a special performance of Leonard Bernstein’s Anniversaries.

Spencer Myer's recital appearances have been presented in New York City's Weill Recital Hall, 92nd Street Y and Steinway Hall, Philadelphia's Kimmel Center and London’s Wigmore Hall, while many of his performances have been broadcast on WQXR (New York City), WHYY (Philadelphia), WCLV (Cleveland) and WFMT (Chicago). An in-demand chamber musician, he has appeared the past five summers at the Lev Aronson Legacy Festival in Dallas with cellists Lynn Harrell, Ralph Kirshbaum, Amit Peled, Tom Landschoot and Brian Thornton, and has enjoyed a recurring partnership with the Miami String Quartet at the Kent/Blossom Music Festival. Other artistic partners include clarinetist David Shifrin, sopranos Nicole Cabell, Martha Guth and Erin Wall, the Jupiter and Pacifica string quartets and the Dorian Wind Quintet.

Spencer Myer's career was launched with three important prizes: First Prize in the 2004 UNISA International Piano Competition in South Africa, the 2006 Christel DeHaan Classical Fellowship from the American Pianists Association and the Gold Medal from the 2008 New Orleans International Piano Competition. He is also a laureate of the 2007 William Kapell, 2005 Cleveland and 2005 Busoni international piano competitions. He enjoys an esteemed reputation as a vocal collaborator since winning the 2000 Marilyn Horne Foundation Competition. Mr. Myer was a member of Astral Artists' performance roster from 2003-2010.

An enthusiastic supporter of the education of young musicians, Spencer Myer has served as a guest faculty at the Oberlin and Baldwin-Wallace Conservatories of Music, and in the fall of 2015, he was appointed Artist-Teacher of Piano and Collaborative Piano at Boston's Longy School of Music of Bard College.

Spencer Myer's debut CD for harmonia mundi usa - solo music of Busoni, Copland, Debussy and Kohs - was released in the fall of 2007 to critical acclaim by Fanfare and Gramophone magazines. He can also be heard on a composer-conducted Naxos CD in performances of three concerti from Huang Ruo's Chamber Concerto Cycle and in a performance of Ravel's Chansons madecasses, included on "Intimate Masterpieces," a 2013 CD featuring faculty and alumni of the Oberlin Conservatory and issued by Oberlin Music. Since 2017, Mr. Myer has released four recordings on the Steinway & Sons label: Piano Rags of William Bolcom, and three discs with cellist Brian Thornton encompassing repertoire of Brahms, Debussy and Schumann.

Spencer Myer is a Steinway Artist.