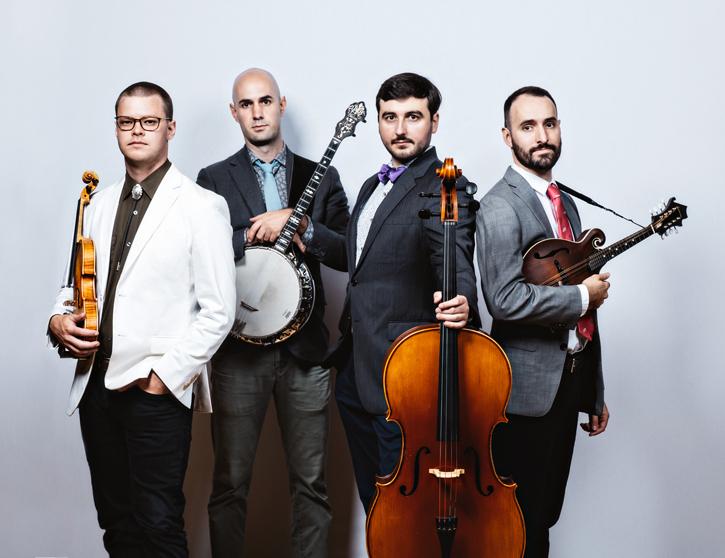 Described as “not classical...but not not classical” (David Srebnik, SiriusXM Classical Producer), Invoke continues to successfully dodge even the most valiant attempts at genre classification. The multi-instrumental band’s other ‘not-nots’ encompass traditions from across America, including bluegrass, Appalachian fiddle tunes, jazz, and minimalism.  Invoke weaves all of these styles together to create truly individual music written by and for the group.

The band has recently garnered major prizes at international competitions including winning First Prize at the M-Prize International Chamber Arts competition in Ann Arbor, MI, the First Prize in the Coltman Competition in Austin, TX, and the “New Music/New Places”  prize at Concert Artists Guild Victor Elmaleh Competition in New York. The group’s 2019-2020 season will take them across North America performing concert engagements and participating in major educational residencies. Highlights include performances at Joe’s Pub in NYC, Strathmore Mansion in Baltimore, MD and Stanford Live in California.

Invoke was the Young Professional String Quartet in Residence at the University of Texas from 2016 to 2018, and the group has previously been selected to participate in the Emerging String Quartet Program at Stanford, and also as Artists in Residence at Strathmore, and as the Emerging Young Artist Quartet at Interlochen. Invoke has shared the stage with some of the most acclaimed ensembles in the country, ranging from the Ensō Quartet to the U.S. Army Field Band, and has also appeared with musicians in greatly varying genres - from chamber rock powerhouse San Fermin to DC beatboxer/rapper/spoons virtuoso Christylez Bacon.

Invoke’s 2015 debut release Souls in the Mud, and their 2018 follow-up Furious Creek, both feature original works composed by and for the group, plus the quartet has also performed and recorded numerous world premieres. Invoke believes in championing diverse American voices, including their ongoing commissioning project American Postcards, which asks composers to pick a time and place in American history and tell their story through Invoke’s unique artistry.

Invoke is currently based in Austin, Texas.