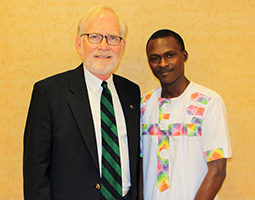 Ohio University’s Center for International Studies (CIS) was honored to welcome alumnus David Crane back to campus during the fall semester, along with several other distinguished graduates.

An international leader in justice and law, Crane worked for 30 years for the U.S. government and later was appointed by the United Nations to serve as the founding chief prosecutor of the Special Court for Sierra Leone, where he was responsible for evaluating and prosecuting individuals who committed crimes against humanity and violations of international human rights that occurred during the Sierra Leone civil war, 1991-2002.

On Oct. 6, Crane returned to campus to provide the keynote remarks at a CIS Global Professional Development Series event, which also featured an alumni panel discussion.

“The master’s degree changed my life in some very profound ways,” Crane said. Earning his degree helped him to better understand the world and the United States’ place in the world. His education at the CIS taught him more than just history and politics, it helped him with understanding languages, cultures and much, much more.

“My degree from Ohio University in international affairs helped to shape my thinking and perspective,” Crane said. He used what he learned from OHIO in every juncture of his career, and it was a key to his success.

As the chief prosecutor for the international war tribunal in West Africa, he used what he learned in his academic program to help him understand, connect with and work with the people of Sierra Leone. One example of this, he explained, was when he introduced himself to a local leader in that leader’s native language.

“He was speechless,” Crane said. “I learned that language here at Ohio University.” He added that he also applied what he learned at Ohio University throughout his work prosecuting the war crimes in Sierra Leone.

“All of this circled back to my studies here in international affairs,” he said.

Ohio University student Abubakarr Sidik Sesay is from Sierra Leone and was excited and honored to meet Crane and to hear him speak. He explained that he and his family have great respect for the work that Crane did in Sierra Leone.

“I am just so happy to meet him,” he said. He added that he also enjoyed hearing his keynote remarks and learned a great deal.

During the alumni panel discussion, Bethany George explained how her bachelor’s degree in journalism and her Global Leadership Center (GLC) certificate had been key in her work in investment, portfolio and fund management.

“I chose to come to Ohio University specifically for the Global Leadership Center,” George said.
The GLC offers experiential learning opportunities and international experiences through working with non-profit agencies, for-profit organizations, startup businesses and other entities.

“It gives you that safe place to go ahead and try new things when it comes to international education,” she said.

George encouraged current students to take advantage of OHIO’s experiential learning programs, such as the GLC, and also advised students to make plans for their careers. Even though their careers most likely won’t go exactly as planned, it is good to have a compass for your career and to work on that while still in college.

“I really credit Ohio University for opening up my career,” she said.

Judi Crane explained in her remarks that she never intended to do international work when she studied early childhood education at OHIO, but she is thankful that she had the opportunity.

“You never know what your path is going to be,” she said. The wife of David Crane, she worked in education for 20 years, often moving from job to job when the family moved for her husband’s job duties with the U.S. military.

Later in life, she worked for the U.S. Department of Defense, supporting U.S. families assigned to embassies around the world. She helped them enroll children in international schools, evacuate countries quickly if needed and assisted with a wide range of issues. She is grateful for the opportunity she had to do this international work and to assist U.S. families living around the world.

“When it came to the families that I supported, I had a profound impact,” Judi Crane said.

Omar Kurdi earned his bachelor of arts in global studies degree at OHIO, where he was in the first class of War and Peace Studies students in the CIS. After his time at OHIO, he completed a graduate program at a top school in France.

Kurdi is currently working in risk and reputation management for an international public relations firm, and took part in the panel discussion by Skype from where he is working in Russia.

“I never saw myself being in Moscow today. I never saw myself going to France. Somehow every step leads to another,” he said. “Don’t have a plan, have a goal. Have a dream of something you want to achieve and just keep pursuing that.”

Kurdi also encouraged OHIO students to take risks in their careers and to take advantage of the opportunities that arise.

“If you have the opportunity to take a risk, you should do it. That’s the learning experience that will never come back again,” he said.

For additional information on the keynote and panel discussion, a video of the event is available here.

For additional information on international studies, please contact the Center for International Studies at 740-593-1840 or visit the Global Professional Development Series website.

This article was provided by the Office of Global Affairs and International Studies. 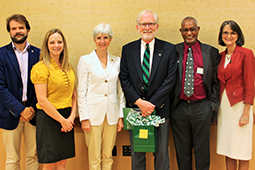