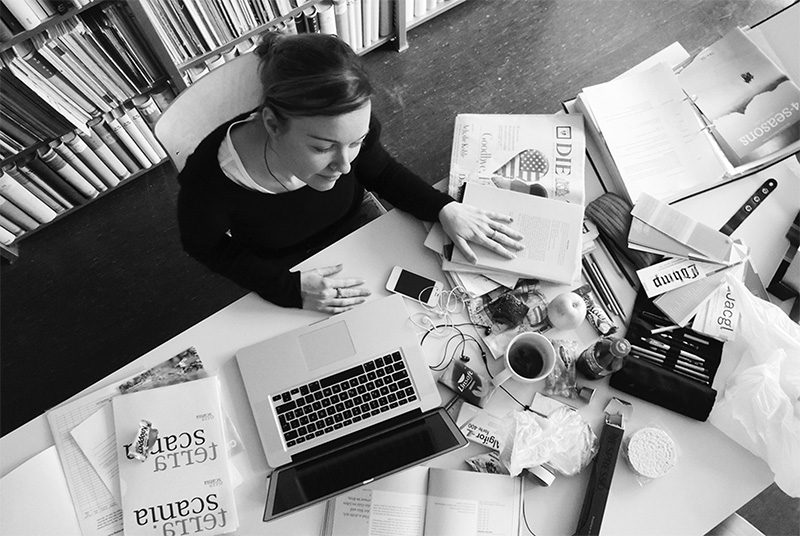 Swiss designer Nadine Bitterli was chosen from among more than 25 international design applicants to fill the inaugural Designer in Residence role in the College of Fine Arts.

The College of Fine Arts began advertising the new residency program in spring 2022 and applicants from all over the world came pouring in, said professor emeritus of graphic design and Ohio University graduate Don Adleta. OHIO’s international reputation in design helped attract the pool of talented designers, he said.

Bitterli’s role begins in late February 2023. She recently completed her master’s degree in visual communication and image research at the University of Applied Sciences in Basel, Switzerland and founded her own design studio in 2012.

Adleta said Bitterli met all the requirements they were looking for in a design resident, including an impressive portfolio, a clear projection of their ideas and success in the industry. For Adleta, Bitterli’s ability to inspire was what stuck out the most to him.

“We hope by having one more person in the close vicinity of the graphic design students, they will then see a worldly approach to graphic design,” he said.

Bitterli’s project centers around climate change and the environment, which she felt inspired to do through her partner who works for an agency that rescues birds. She’s hoping to spread a message of positive individual change.

“It’s good to know that you can [make a change],” she said. “People lost their hope. You have to know you can’t rescue the world, not one person. You can just do a little part.”

While Bitterli has never visited the United States, she’s looking forward to being in Athens and getting the chance to work with, learn from and collaborate on projects with OHIO students.

About the Designer in Residence program

The Designer in Residence program enhances the learning experience for OHIO graphic design students by bringing design ideas and practices from outside academia and by providing opportunities for students to delve into a hands-on design project with seasoned professionals. Students have a voice in design decisions that impact future innovations, and resident designers enjoy time, space and resources to become fully immersed in their work.

Strunk collaborated with Adleta, MFA 1975, and two other OHIO graphic design graduates, John Paolini and Robin Smith, on the Designer in Residence initiative in the College of Fine Arts.

“We feel Athens is a very special place, [and] the fact [that] it’s not a big city is not a disadvantage, but an advantage,” Strunk said. “It’s a little bit quieter and allows you to be one with the environment.”

Because of this, Strunk said it was very important to ask applicants why they wanted to be in Athens to realize their project, ensuring they were ready to embrace the rich yet not rushed feel of the city. He also explained that the annual program has been built as a “win-win” for both students and designers.

Adleta said he and Strunk first began thinking about ways to give back to the Graphic Design Department at OHIO 15 years ago. As a Swiss trained designer, Adleta had a breadth of experience in the industry he brought back to the department when he joined as a faculty member in 1994. The Designer in Residence role adds to that breadth of experience and benefits students and the OHIO community more broadly, he said.