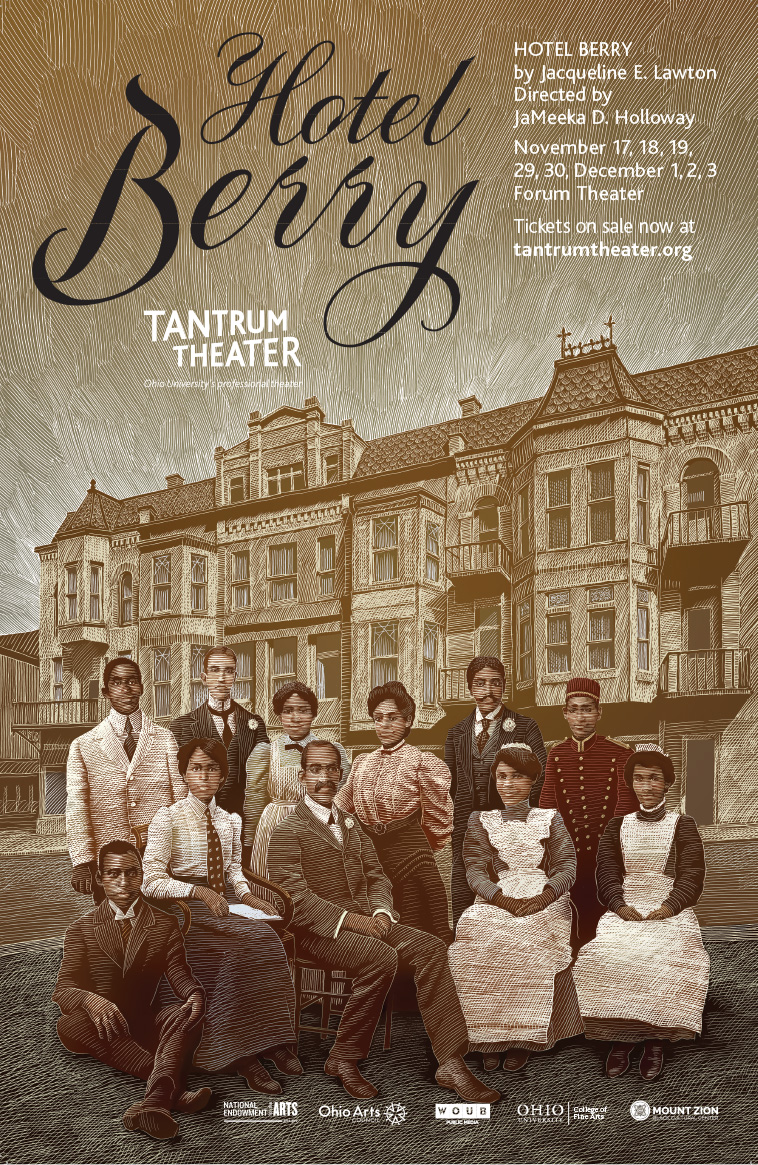 The Ohio University College of Fine Arts professional theater company, Tantrum Theater, is producing a new work that will hit the stage in November.

The story of the Berry Hotel, just one of many untold parts of Athens history, will be taking the stage starting Thursday, Nov. 17, with the help of a playwright, local historians, community members, students and Ohio University faculty. Tickets will be on sale soon and can be purchased online at this website.

The play, “Hotel Berry,” has been years in the making, playwright Jacqueline E. Lawton said. Originally conceptualized in 2019, Lawton’s goal was to tell a story about Athens that wasn’t widely known, but that residents were proud of.

Lawton said while visiting and researching Athens, she fell in love with the “energy of the city.”

The play is funded with the help of a grant from the National Endowment for the Arts (NEA) that was awarded to Tantrum Theater, the producer of the show, in 2021.

Actors, writers, producers and directors also worked with the Mount Zion Baptist Church Preservation Society, a non-profit working to recognize the “history and ongoing concerns of Black Americans in Southeast Ohio and throughout the region.”

The Mount Zion Baptist Church Preservation Society was a completely invested partner in the realization of the play from script to stage, and two characters in the play are even named after Society board members.

“This is a story of Black entrepreneurs that were incredibly successful and how they lived their lives … in 1912,” said Josh Coy, producing director of Tantrum Theater. “It’s really a window into a community story that people should be proud of.”

Trevellya Ford-Ahmed, communication and media director for the Society, said the Society has never been this intimately involved with a play about their town and said creating “Hotel Berry” was a unique experience for the organization. Ford-Ahmed said this involvement included reading and giving feedback on the play for historical accuracy and publicity.

“It’s a story that really needs to be told, and especially for our youth,” she said. “We hope that it will attract students … so that they can really get the inside scoop of this marvelous building that was torn down to make a parking lot.”

“Hotel Berry” centers around Edward Berry and his wife Martha “Mattie” Berry, a Black couple who owned the hotel and were trailblazers in the hospitality business at a time when equity was far from realized. Lawton explained that the couple, specifically Mattie, was responsible for practices that are commonplace in the hotel industry today, such as placing Bibles and small toiletries in rooms. The play also explores Edward’s desire to run for public office in a time period when Black people were not being elected to political positions, Lawton explained.

“This really could be a trilogy, I could tell so many plays just on this one idea,” Lawton said. “The hardest part is, always in theater, narrowing down what aspect of the story you’re telling.”

Director JaMeeka Holloway said her vision for “Hotel Berry” was to include all voices in the process, including actors and community partners, and to portray the characters as more than just historical figures.

“My goal is to take what it is that they are bringing into the room, and then support them,” Holloway said. “It’s never my intention to fill the role of executive thinker.”

“Hotel Berry” runs Nov. 17, 18, 19, 29, 30, and Dec. 1, 2, 3 at the Forum Theater in the RTV Building at Ohio University. Live streaming options will be available for limited performances.  For additional information, see the College of Fine Arts website.