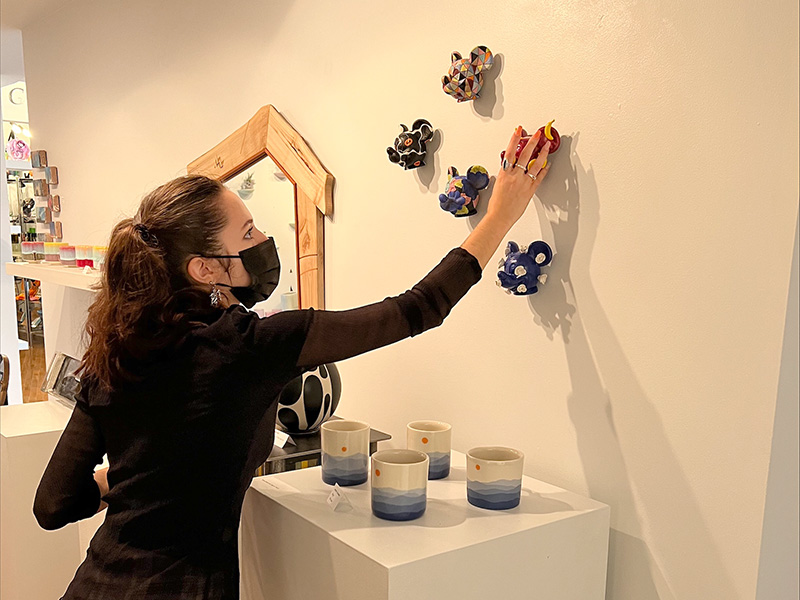 Senior Erin Mangan says her summer as a gallery assistant at the Chautauqua Institution, based in Chautauqua, New York, was like an “adult summer camp.”

Mangan, a fourth-year student studying art history and Spanish, installed exhibits, sold art and learned more about the intersection between business and the arts. Read on to learn about what stuck with her after the summer ended.

This interview has been edited for clarity.

Skidmore: Can you tell me more about the program and what it was like to be surrounded by artists for the past summer?

Mangan: It’s a great place and a great opportunity. I absolutely loved working there and working at the galleries, especially because I’m an art history major. I always wanted to have that experience working at a gallery or at a museum, it’s just really hard to find an internship and a paid one at that.

The first day, I went and met everybody because I moved in before the galleries were even open. So, we were there two weeks before the galleries opened to help with installation and getting the prep work done. Once we opened, I was a full gallery assistant. I worked the front desk, I had office days and then personally, I was in charge of our craft gallery. We had, combined, five gallery spaces and the smaller craft gallery was [where] artists [sold] smaller items like mugs, bowls and things that we continue to sell or put out separately from our gallery store. I was in charge of inventory, setup and swapping things out and rearranging so they had a new work almost every week to keep people interested. I was terrified the first day my boss told me that I was going to be doing that because I was like, ‘I don’t think I know what entirely I’m doing!’

Skidmore: That sounds like a lot of responsibility! Was there anything else you learned that you hadn’t done before while you were there?

Mangan: I was in charge of the “Bible.” The “Bible” is this big binder full of all our inventory lists for the craft gallery, sales lists and paper sales sheets. Whenever we do a sale of a work in the gallery of the craft gallery, we write a handwritten sheet. I was responsible for making sure I had all of those and we organized them by gallery [and] show and I made sure that I included every single sale we had. Closer towards the end of the season, I would go and do final reviews and make final sales sheets to total up how much we made, how much we owe the artists, collecting W9s, everything like that.
I was in charge of quite a lot and I was terrified, but it wasn’t as hard as I imagined.

Skidmore: It seems like you got a ton of new skills. What was it like to keep up with all of this?

Mangan: We did 10 shows in a summer season. We were selling shows [on] one day and installing other shows the next day while still being open in some parts because we never fully closed. I spent many hours painting walls and I got very comfortable using power tools in dresses. But, it was so interesting. I loved those days because they were more hands on and I learned how to light a painting properly and how to take care of a painting.

Our last show was called “Thinking Green” and it was a show of our members. A lot of the people that live in Chautauqua are artists and they got to submit pieces to that show. They let us arrange and hang a lot of pieces by ourselves. I was scared most of the time because everything was very valuable, but I also [got] to meet a lot of the artists that we were showing, and everyone was just so genuine and down-to-earth. It was a really positive experience.

Skidmore: So, what would you tell other students to encourage them to participate in learning opportunities outside the classroom?

Mangan: I encourage you with my entire heart to do it. The experience that you have, the people you meet, the new skills you’re going to learn – that is going to be so beneficial in your future and your lifetime. Even if it’s not something that you particularly want to do in a specific field, that’s still an experience and it’s still a learning curve.

Now, I know that I would like to work in a gallery or a museum, and I also now have the experience in a gallery to put on my resume and be like, ‘Yes, I do know how to do information sheets and sales sheets. I do know how to organize W9's or put up a painting. I can patch up holes in the wall.’ You never know until you try.