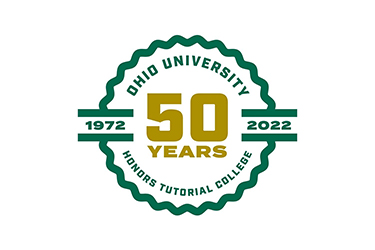 Ohio University Libraries is joining the Honors Tutorial College (HTC) in celebrating its five decades of academic achievement with a fourth-floor exhibit in Alden Library titled, “With Honors: OHIO Community Contributors to Rare Books, Research, Collecting & Preservation,” which will be on display throughout fall semester.

Additionally, on Aug. 27 from 12:30- 3 p.m., HTC reunion attendees are encouraged to stop by the fourth floor of Alden Library to view the “With Honors” exhibit, make wearable buttons and visit the fifth floor to interact with 10-12 tables of hands-on materials from University Archives, which includes yearbooks, historic photos, student newspapers, special documents about the founding of HTC and much more. The fifth-floor display will be available for viewing the entire week.

“I really like bringing people back to the Libraries” Bill Kimok, University archivist and records manager who curated the display, said. “It is important for people to remember.”

Miriam Intrator, University Libraries’ rare book librarian and liaison librarian to honors programs, described two areas of inspiration for the “With Honors” exhibit: her work with HTC students in classes and as interns and research apprentices at the Mahn Center, and her work with donors and alumni affiliated with HTC.

“In particular, Lynda and Joe Berman, who was a former dean of HTC who sadly passed away suddenly last year, [both] were very good friends of the Libraries, especially in supporting rare books and preservation work,” Intrator explained. “Most people are not interested in preservation, don’t even think about it.  But Joe, and Lynda continues to, really recognize the long-term significance of maintaining and repairing the collection.”

One of those now repaired rare books in the exhibit is “Commentarivs in librum I Jobi” and “Logos Exegetikos” by Johannis Coccejus that was published in 1644. Previously owned by Jacob Lindley, the first sole instructor and the first president at Ohio University, this book’s presence signifies even from its earliest days, the important role it played in the instruction of students and the history of University Libraries over time.

The second category of materials in the exhibit are primarily rare books that have been used by HTC students in recent years for classroom and research projects.

“This includes books related to Japanese internment donated by HTC alumna Laralyn Sasaki that have been important for students in a number of different classes that I work with, including Law & Colonialism in political science and Modern Japan in history,” Intrator said.

Some of those internment books include “Citizen 13660,” with drawings and text by Mine Okubo (1946), about the experiences of a Japanese American artist during World War II and her life in relocation centers, as well as “The College Nisei” by Robert O’Brien (1949).

Other material highlighted in the exhibit are items from the Left Book Club, which was a research topic for HTC student, Marc Blanc, whose work first started out as a semester-long project and then ballooned into a really important aspect of his time at the University. He is currently a Ph.D. candidate in literature.

“Marc Blanc did intensive research on the Left Book Club as a research apprentice. He then curated an exhibit in the Mahn Center, won a student expo award, and wrote a proposal that resulted in [being awarded] a Libraries’ 1804 grant to purchase more Left Book Club books,” said Intrator. “We now have an almost complete collection!”

To learn more about visiting University Libraries and the various exhibits and events that take place throughout the year, visit https://www.ohio.edu/library/.

“Coming to the Libraries [is a time] for alumni to remember who we are, and maybe some good times they had here,” Kimok said.