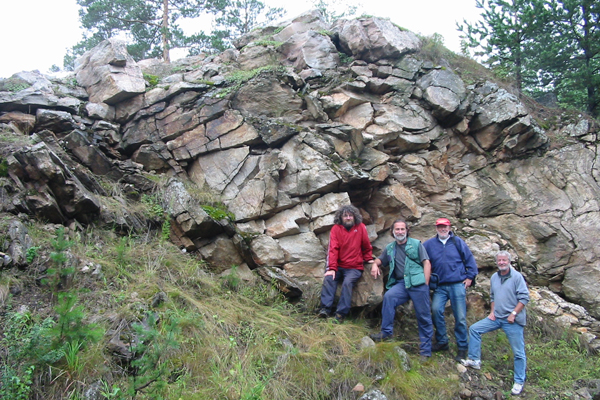 Damian Nance (right) with colleagues (left to right) Brendan Murphy (Canada), Rob Strachan (U.K.) and Cecilio Quesada (Spain) in 2005 examining an outcrop in the Ural Mountains of Russia that shows almost identical relationships to those in the northern Appalachians, the U.K., and western Europe.

Twenty-five years ago, a book by two geology professors described an amazing history of the world, a cycle of mountains rising and continents colliding. Now Damian Nance and Margaret Thompson bring together scientists from around the world in a new book — with new scientific insights that revolutionize our understanding of the origin and evolution of the Appalachian Mountains and mountain ranges of the same age in Europe and northwest Africa.

Nance's work on the geologic record of the Earth combines the Supercontinent Cycle and the history of ocean closing and mountain building on either side of the North Atlantic in the time window between about 650 and 260 million years ago. In geologic time, that's somewhere between the Earth's first animals up through the Age of Dinosaurs.

Their new book describes geological advances in three linked mountain belts whose formation, together with that of the Ural Mountains in Russia, assembled the greater part of the supercontinent Pangea some 300 million years ago.

"It was a very active geologic time interval, and the mountain ranges tell us how the land masses were being shaped and reshaped by tectonic forces," said Nance, Ohio University Distinguished Professor Emeritus of Geological Sciences. "Thus, the Appalachians record the collision of North America and West Africa. The Caledonides of western Europe brought together North America and Europe, and the Variscan Belt of southern Europe documents the collision of Europe and North Africa. Along the slightly younger Ural Mountains, Europe collided with Siberia."

Nance expects the new book "to be as important and influential as its predecessor."

What have geologists learned in 25 years since Nance deduced the Cycle of Supercontinents?

In December 1996, the Geological Society of America published a book, co-edited by Nance and Thompson, which described important new geological developments that were revolutionizing understanding of the origin and evolution of the Appalachian Mountains and mountain ranges of the same age in Europe and northwest Africa. Thompson is Professor Emerita of Geosciences at Wellesley College.

Their 390-page book, “Avalonian and Related Peri-Gondwanan Terranes of the Circum-North Atlantic,” brought together 51 authors from six countries and proved to be a landmark volume that continues to be cited to this day.

"But many years have passed since the book’s publication, and many new advances have been made in Appalachian geology and its cross-Atlantic linkages in the interim," Nance said. "New analytical methods and field techniques have emerged, international communication and collaboration has increased greatly, and the database that helps geologists to understand the origins of these mountains has grown exponentially."

And so, to mark the book’s 25th anniversary, Nance and Thompson solicited the help of colleagues to compile a new volume aimed at updating the original with this trove of new information. To generate interest and potential contributions to the new book, Nance and Thompson co-convened two meetings in 2019. The first, organized in collaboration with Yvette Kuiper (Colorado School of Mines), was titled “Peri-Gondwanan terranes and their origins: What do we really know?” and was held in March at the Geological Society of America’s Northeastern Section Meeting in Portland, Maine. The second, organized with the additional support of Brendan Murphy (St. Francis Xavier University, Canada) and Rob Strachan (University of Portsmouth, United Kingdom), was titled “New developments in the Appalachian-Caledonian-Variscan orogen.” It was held in September in conjunction with the Geological Society of America’s annual meeting in Phoenix, Arizona.

From the papers delivered at these two meetings, supplemented by other solicited contributions, Nance and Thompson and their three colleagues were able to make a strong case for a second book, “New Developments in the Appalachian-Caledonian-Variscan Orogen,” to the Geological Society of America. Their proposal was successful, and the 436-page book was published by the society this past July.

Evolution of the world's interlinked mountains

"To provide a comprehensive overview of current understanding of the evolution of this vast, interlinked mountain chain, the peaks of which once rivaled those of today’s Himalayas, the book brings together 65 authors from 10 countries and takes the reader on a clockwise path around the North Atlantic, starting in the Appalachians of the United States and Canada, then moving on to the Caledonides of Spitsbergen, Scandinavia, Scotland and Ireland, and ending in the Variscan Belt of southern Europe and Morocco," Nance said.

Some of the new things scientists are learning about the world that are described in the book:

"All of this new research conducted around the world helps us better understand the tumultuous history of our planet over a timespan that's hard for most people to imagine," Nance said. "It also helps us better understand the tectonic forces still pulling and pushing our continents and oceans and the volcanic activity that continues to bring magma from the earth's interior to its surface. Our planet is not done changing yet."