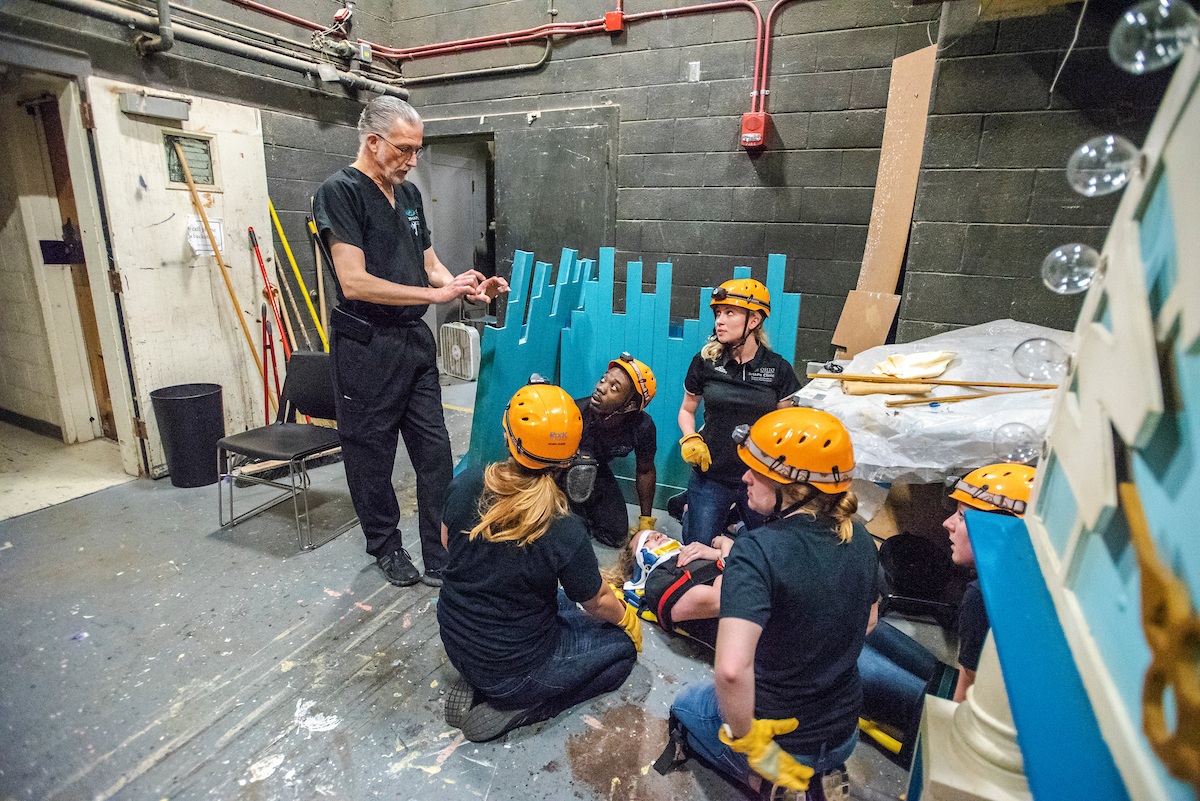 CHSP professor Jeff Russell trains students on how to respond to medical emergency situations in the performing arts.

College of Health Sciences and Professions professor Jeff Russell has spent his career assuring that performing artists receive the same amount of attention to health care and athletic training as athletes do, now expanding his research to the film and television industry.

In collaboration with researchers at the Boston University Chronic Traumatic Encephalopathy (CTE) Center, Russell will examine the brains of stunt performers from North America.

“We are honored to join forces with BU to study the long-term health and wellness of stunt performers who are crucial to the success of motion picture and television productions,” Russell said. “They should receive the same type of attention, health care and research that sports athletes receive.”

About 9,000 stunt performers work in motion picture, television and other entertainment productions, and researchers believe that stunt performers are at a high risk for chronic traumatic encephalopathy (CTE) because they’re exposed to repeated trauma throughout their stunt performing careers. Scientists suspect that about 80% of stunt performers have experienced one or more serious head impacts while working.

CTE is a degenerative brain disease associated with a history of repetitive head impacts, including those sustained in contact and collision sports such as American football and ice hockey, as well as through military service and domestic violence. The disease can only be diagnosed after death by neuropathological examination of brain tissue. More than 300 former NFL players have been diagnosed with CTE by the Boston University CTE Center research team.

In this new study, stunt performer donor brains will be analyzed at the Understanding Neurologic Injury and Traumatic Encephalopathy (UNITE) Brain Bank at the Boston University CTE Center.

“Our research team is firmly committed to optimizing the brain health and well-being of stunt performers,” Ann McKee, chief of neuropathology at VA Boston Healthcare System and director of the Boston University CTE Center, said.

Despite the popularity of stunt sequences and action films, scientific research dedicated to understanding the effects of stunt-related concussions and sub-concussive impacts is nonexistent.

“Participating in this research provides an opportunity for current performers to play an important role in the reduction of risk and treatment of head injuries for future stunt performing generations,” Lori Stewart, stuntwoman, Health and Safety Performer Advocate for the Union of British Columbia Performers, and one of the community-engaged co-investigators in the research group, said.

The scientists through this study are hoping to gather essential information to improve safety in stunt performance and preserve the long-term brain health of stunt performers.

The goal for CTE researchers is to be able to diagnose CTE in living people so they can treat the brain condition while the person is alive and help improve their well-being.

Jeff Russell is an associate professor of athletic training and director of Science and Health in Artistic Performance. Previously he’s conducted studies in concussions in theater artists and has started clinics focused on health care and rehabilitation for performing artists. Russell is a Fellow of the International Association for Dance Medicine & Science (IADMS), a professional organization formed to develop the dance medicine and science field. In addition, he also is on the Founders’ Board of the Bridge Dance Project.