Moran and Bell research British tearooms, where a hunger for rural past meant opportunities for women 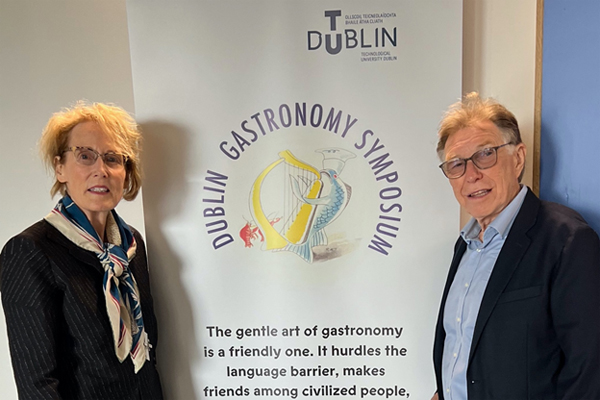 Drs. Theresa Moran and David Bell speaking at the Dublin Gastronomy Symposium in June at the Technological University in Dublin, Ireland

At conferences in Ireland and Italy this summer, Theresa Moran and David Bell presented two views of the 1930s British pastime of rambling about the countryside — one from the perspective of nostalgic and hungry day hikers, and the other from the entrepreneurial women who responded with rapid growth of rural tearooms.

Ramblers in search of  'idealized rural past'

“People tend to think that 1930s Britain was a bleak decade of mass unemployment and economic stagnation,” Bell explained. “But that really wasn’t the whole story. There was certainly high unemployment in the older industrial areas that caused real hardship and suffering, but the second half of the 1930s actually saw economic expansion, especially in the Midlands and South, and a marked increase in leisure time activities like rambling. Railway companies regularly ran special excursions that drew huge crowds. In fact, the Hikers’ Mystery Express run by the Great Western Railway once drew a crowd of 2,000 for a mass hike.”

“So from a food studies perspective, the question is what did these ramblers eat? We found some answers through the weekly newspaper column called Rambling Notes by W. E. Hopkin, head of a ramblers group based around Ripley, Nottinghamshire. In these columns, which ran throughout the 1930s, Hopkin describes the previous Sunday’s day-hike and the meals shared with 15 to 25 other ramblers. Ramblers carried minimal food in their knapsacks and preferred to eat in pubs and tearooms, often improvised in farmhouses, and often with signs that read: ‘Tea and Hot Water Provided.' The ‘tea’ refers both to the meal—sandwiches and cakes—and also the drink,” Moran said.

A larger than life character, Hopkin was famous throughout the Midlands as a social reformer, writer, broadcaster, wit, poet, and naturalist, and also a friend of D.H. Lawrence. His columns provide incredibly rich insights into what rural tearooms symbolized for ramblers.

“We were really fortunate to find Hopkin’s columns, as they can help chart the shifting social norms of the decade as well as the explosive growth in rambling and rural tearooms,” Bell said.

Bell and Moran describe the tearooms as sites for creating and maintaining social relations and identities and examine the tearoom through the context of conviviality, commensality and hospitality.

"The tea experience was central to the conviviality of the ramble, creating social bonds between diverse rambling group members reinforced by the commensality of eating and talking together. Hopkin used the tea experience to extoll the imagined traditional values of the English countryside embodied in the tearoom host or hostess. The hospitality proffered welcomed ramblers from the city back to an idealized rural past of abundant, authentic food and farmhouse comforts," Bell said. 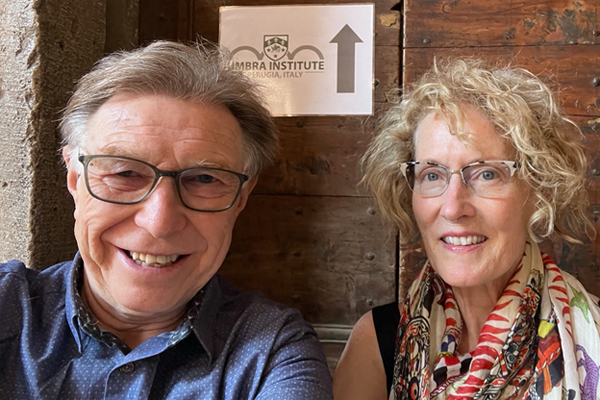 Their first presentation was from the view of the ramblers. At the Dublin Gastronomy Symposium held at the Technological University in Dublin, Ireland, from May 31-June 1, Bell and Moran presented “Tea and Hot Water Provided:” Conviviality, Commensality, and Hospitality in the Rambling Notes of W.E. Hopkin 1930–1940,” examining how ramblers perceived the act of communal eating during in day hikes.

Later in June at the Perugia Food Conference, held at the Umbra Institute in Perugia Italy from June 9-12, they examined the rise of the rural tearoom from the perspective of the entrepreneurial host in “Tearooms and the Weekend Ramble: How the Expansion of Leisure was Fed in 1930s Britain."

'Authentic, home-made, real' were on the menu

But what was the actual perspective of the rural tearoom host on this boom in customers?

“This is what we wanted to explore in our paper in Perugia,”  Moran said, adding that this question posed a far more difficult question to answer, requiring a much broader methodology of data collection.

"We can get some sense of the growth of rural tearooms catering for the ramblers from sources like trade directories and rambling club handbooks," Moran added.

According to Kelly's Trades Directory for the county of Derbyshire, one of the most popular hiking areas, the number of refreshment rooms doubled in number from 1926 to 1936, while the Sheffield Clarion Ramblers Handbook listing of tearooms in their area increased from 13 in the 1920s to 29 in the 1930s, with 20 of those owned by women.

"It’s not surprising that rural women were quick to see how serving food and drink to ramblers could supplement the household income. And as has been noted by sociologists commenting on this phenomenon, preparing and serving refreshment and meals for payment were similar activities to the women’s daily, usually uncompensated, responsibilities,” Moran said.

She pointed out that there were plenty of resources for women to learn about setting up a tearoom. Agricultural magazines, such as Farmer and Stockbreeder, and the Farmers Weekly, included farm home pages aimed at wives with advice on how to start a tearoom, how to attract customers, and what type of foodstuffs to offer.

Egg dishes, cream and butter — food stuff from the premises or local farmhouses were always mentioned approvingly. Authentic, home-made, real, were key words that characterized the fare women were encouraged to serve in these tearooms.

“If ramblers saw the tearoom as embodying the traditional values of the English countryside,” Bell concluded, “a kind of traditional relationship between traveler and host, the host saw it as far more transactional. The eventual commodification of the rural tearoom experience suggests that hosts very well understood the ramblers’ search for a lost rural past, and how to deliver that idealized past through all the curated trappings that we now associate with a rural English tearoom."

Tags:
College of Arts and Sciences
Research
Department of Linguistics