Tapping into her OHIO roots: Alumna turns to student to push first book across the finish line 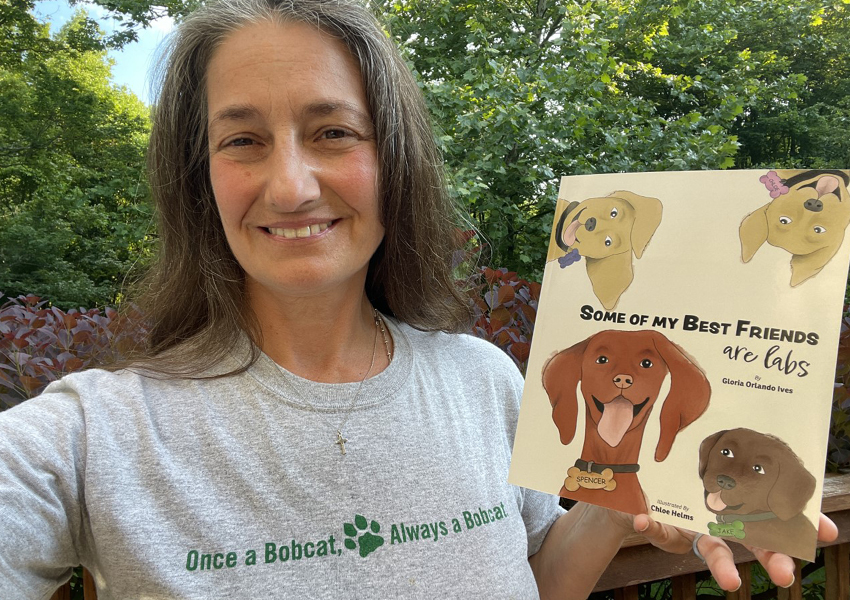 When Ohio University students and alumni connect, magic happens. A recent connection between Bobcats whose OHIO student experiences are separated by nearly 35 years resulted in a long-awaited dream fulfilled for the alumna and a portfolio-building opportunity for the student.

In 2009, Gloria (Orlando) Ives, BSC ’88, penned her first book, “Some of My Best Friends are Labs.” The children’s book was written from the perspective of her family dog, Spencer, who passed away that year.

“Spencer has lots of adventures in lots of places, but he loves his own home and family most,” Ives, who resides in Malvern, Pennsylvania, said of the book.

Busy raising and supporting her family, Ives ended up setting the project aside until last year, when a friend introduced her to a local illustrator, Chloe Helms, who agreed to illustrate the book. Once that step was complete, Ives found herself in need of someone who could design the book. The arrival of Ohio Today, Ohio University’s alumni magazine, in the mail gave her an idea.

“It occurred to me today when I received my Ohio Today copy that starting with my OU roots might send me in the right direction,” Ives wrote to the magazine.

Ives explained that she was interested in hiring an OHIO student with experience in using Adobe InDesign software who could help take her book across the finish line and asked the magazine’s staff for recommendations.

Sarah McDowell, BFA ’02, art director for Ohio Today, recommended CJ Herr, BFA ’22. At the time, Herr was a senior majoring in graphic design through OHIO’s College of Fine Arts and the design editor of OHIO’s Athena Yearbook for the past two years.

Ives and Herr connected, discussing the book and their OHIO experiences.

“Getting acquainted with CJ was a real blessing and what I like to think of as providence,” Ives said.

Ives provided Herr with the book’s illustrations and served as an intermediary between Herr and the illustrator. For Herr, who had previously designed zines, magazine spreads and books, Ives’ book presented the first opportunity to design a children’s book and one of the first chances to freelance.

“I enjoyed adding the little touches like a dog tag at the beginning that allowed the reader to claim the book—something I really liked in children’s books as a kid,” Herr said.

“Some of My Best Friends are Labs” was published on May 13, officially making Ives a first-time author and giving Herr, who graduated from OHIO in April, another piece for their professional portfolio.

“I was thrilled to work with a Bobcat,” Ives said, “and CJ was terrific to work with—professional, patient and able to overcome some formatting hurdles with perseverance.”

This Bobcat connection gave Ives and Herr not only an opportunity to support each other’s success but a chance to reflect on their OHIO experiences and the moments that have paved the way for their futures.

Ives said she still has a green folder filled with all her old papers from her time as an OHIO student, majoring in interpersonal communication through the Scripps College of Communication. Those papers include one she wrote on the women’s movement for OHIO alumnus, Professor Emeritus and the first Director of OHIO’s School of Interpersonal Communication (now known as the School of Communication Studies) Dr. Paul Boase’s INCO 342 course and another, titled “Seeking a Universal Definition of Communication,” for Jeff Ringer’s class.

“I believe those classes and professors definitely had an impact on me,” Ives said. “I can still remember how I felt then—so full of curiosity and eager to find my voice. … It all makes me want to go back for my Master’s in Communication.”

Herr said their OHIO experience was marked by being immersed in a community of designers and the support of faculty and staff. Herr is spending the summer as a marketing design intern with Washington, D.C.-based Video/Action, which collaborates with educators, activists and artists to produce documentaries, television programs and training videos. The company’s founder and president, Robin Smith, BFA ’72, is a fellow OHIO College of Fine Arts graduate.

“It was very comforting and exciting to work with a fellow Bobcat,” Herr said of collaborating with Ives. “I think us Bobcats can, and should, support each other.”