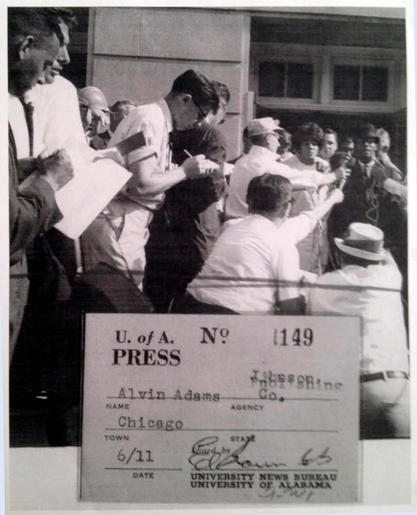 #ScrippsLegacyWeek concludes with a tribute to Class of 1959 journalist Alvin Adams, who documented the Civil Rights Movement. On June 11, 1963, Governor George Wallace stood in a doorway at the University of Alabama to attempt to block racial integration. Adams was there. . . for Jet Magazine.

In June of 1963, Adams’ bylined story in Jet Magazine invoked Biblical parallels: “Like Simon Peter standing ‘at the door without,’ Alabama Gov. George Wallace thrice denied two Negroes admission to the University of Alabama. But with the arrival of Federal troops, Gov. Wallace, like the man who just heard the second crowing of the cock, stepped mutely aside.”

Adams — who grew up just miles from the Ohio University campus — was among the first Black graduates of its journalism school in 1959. He covered the Civil Rights Movement for the Chicago Defender and Jet Magazine.

Adams also used his research and writing skills to document his family’s history in southeastern Ohio, including emancipation papers and other artifacts from the early 1800s. The E.W. Scripps School of Journalism celebrated Adams’ legacy via a well-attended symposium in 2019.

One of the Alvin Adams Symposium panels was moderated by Scripps student Micah Fluellen, BSVC ‘20, who designed a billboard honoring Adams. Fluellen now is Feature Art Director at the Los Angeles Times.

On OHIO’s Athens campus, the Adams Hall (residence building) completed in 2007 is named for Alvin Adams.