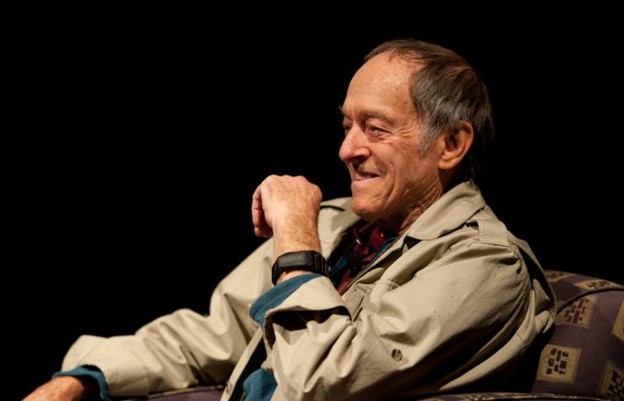 Paul Fusco spoke at Schuneman Symposium at Ohio University in 2012.

Our next legacy leader is alumnus Paul Fusco, who photographed the Robert F. Kennedy funeral train from New York to Washington, DC, on June 8, 1968.

In 1968, presidential candidate Robert Kennedy was assassinated in Los Angeles after winning the June 5 California primary. After a funeral mass in New York, mourners lined the train track to view the funeral train from New York to Washington, DC. The journey, on June 8, took eight hours followed by burial at Arlington National Cemetery.

Fusco, a photographer for LOOK Magazine, documented this somber trip from inside the 21-car train. He recalled to Publishers Weekly in 2008: “. . . when the train emerged from beneath the Hudson, and I saw hundreds of people on the platform watching the train come slowly through — it went very slowly — I just opened the window and began to shoot.”

Fusco graduated in 1957 from Ohio University with a fine arts degree in photography; he had photo experience in the US Army Signal Corps in Korea.

He returned to Ohio University in April of 2012 as a presenter at the Schuneman Symposium on Photojournalism and New Media. His topic: The Robert Kennedy Story and Photographs.