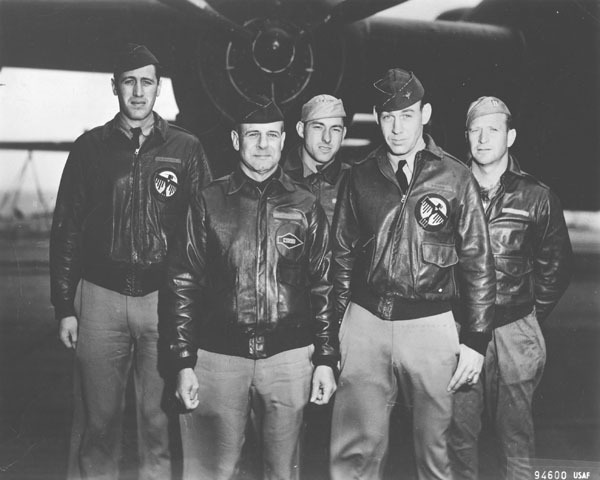 In the archives of Alden Library lies a World War II-era story that sounds a lot like the plot from the summer blockbuster “Top Gun: Maverick.”

Following the devastating attack on the fleet at Pearl Harbor, Lt. Col. Jimmy Doolittle was given the task of designing an attack on Tokyo, modifying a fleet of bombers so that they could take off from a carrier deck in the Pacific. And like the mission Maverick has to design in Top Gun, the odds of coming home safely were slim.

Sitting in the co-pilot's seat with Doolittle on that raid was Ohio University alumnus Dick Cole.

Historian Henry Tribe used the Richard E. Cole papers, donated to the Ohio University Archives, for an article on Cole he penned for the Texas State Historical Association.

"As a youngster, he (Cole) rode his bicycle twenty-five miles just to get a look at his aviation hero James 'Jimmy' Doolittle. Cole was also drawn to hunting and the outdoors. Although an indifferent student who viewed school as a prison, Cole aspired to being either a pilot or a forest ranger," Tribe wrote. The Great Depression led Cole to Ohio University, where he majored in forestry. But soon he was off to the Civilian Pilot Training Program, enlisting in the U.S. Army Air Corps, and eventually volunteering for a secret mission.

Tribe describes how, like the veteran pilot Maverick, Doolittle wasn't supposed to be on the Tokyo mission; he was just supposed to design it.

"During training, Lieutenant Cole was co-pilot on a flight in which the pilot became ill. Doolittle himself filled in for the ailing pilot and remained with the crew for the upcoming raid," Tribe writes. (Read Tribe's article for more information about Cole, who died at the age of 103.

Like Cole, Tribe is an OHIO alumnus, earning two history degrees—a B.A. in 1979 and an M.A. in 1982—from the College of Arts and Sciences. Tribe wrote his M.A. thesis on the political career of 17-term Ohio congressman Thomas A. Jenkins under the supervision of Ohio University Distinguished Professor Emeritus of History Alonzo Hamby. Tribe went on to earn his Ph.D. in history from Bowling Green State University in 1990 and taught at several colleges in Ohio and West Virginia, including at Ohio University-Southern from 2000-2020.

Most recently Tribe tells the story of Hall of Fame basketball coach Don Haskins "The Bear," who led Texas Western to the NCAA championship by defeating Kentucky in 1966. "The victory helped break down the walls of racial injustice in college sports because Haskins played only African American players in the championship game," Tribe writes in his latest article for the Texas State Historical Association.

"The game changed college basketball forever by drawing attention to the racism that existed in college athletics in the American South. Played in the background of the civil rights movement of the 1960s, Texas Western’s victory on the basketball court proved significant in breaking down the walls of segregation in athletics. Haskins always downplayed his decision to start five Black players in the game. Years later, he wrote, ‘I certainly wasn’t trying to make a social statement. I just wanted to win. If my five best players were from Mars, I would have started five Martians,’” Tribe writes in the article.