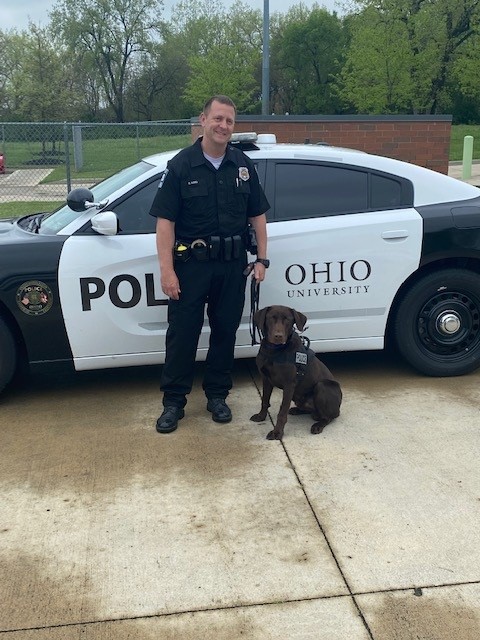 Ohio University Police Department’s (OUPD) newest K9 team graduated from Explosive Detection Canine (EDC) school last Friday, May 6. The team of OUPD officer Brandon King and his canine partner, Bach, celebrated the momentous occasion with family, friends and members of the Columbus Fire/Bomb Squad, showing off all they accomplished together through the training by putting on a demonstration. 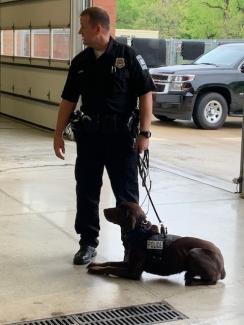 King, who is a 21-year veteran of OUPD, has never had a K9 partner but is excited for the work they will get to do together and the bonding relationship that will continue to form.

“It’s pretty awesome having K9 Bach as a partner,” King said. “Not many people get the opportunity to train and work side by side with an EDC while serving and protecting their community. I look forward to many rewarding days with him.”

To get certified, K9 Bach and King went through an eight-week EDC handler school which involved imprinting the canine on 23 select scent compounds known in most explosives, including home-made explosives. In the school, King also learned basic knowledge of canine behaviors, canine first aid, recognition of canine distress, leash skills, commands, operation protocols for scenes, and how to bond. He then had to pass a written portion of testing and prove that the two could continue to show proficiency as a team. They were then tested together and certified through the Ohio Police Officer Training Academy (OPOTA).

The explosives detection K9s and their handlers are used to “sweep” large public events for bombs prior to and during high profile public gatherings such as sporting events, parades and festivals, large convention gatherings and political campaign events. 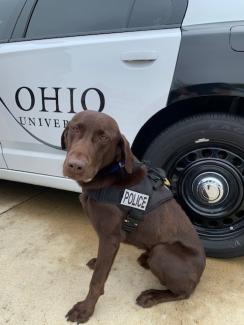 K9 Bach is a four-year-old chocolate American Hunting Labrador Retriever who was donated by the Galloway/Hammond family because of his fearless mentality and extremely high drive. He began his service for OHIO on Monday, May 9.

Alongside King and K9 Bach, OUPD also currently has another K9 team consisting of OUPD officer and EDC handler Tim Woodyard and his K9 partner Alex, who is set to retire later this year.