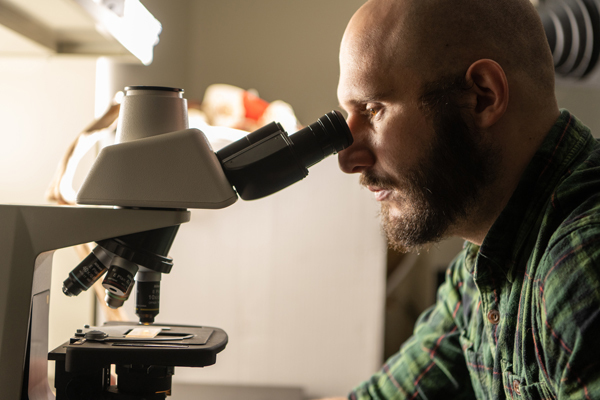 Riley Sombathy gets a glimpse of life from 150 million years ago.

Getting Ready for Expo

Riley Sombathy says nothing is more exciting than when he looks into the microscope and the rings appear on the slice of ancient Allosaurus bone.

He's using those rings—akin to tree rings—to learn more about how the dinosaurs that lived 150 million years ago grew from birth into adulthood. He's presenting on how he's gathering, processing and analyzing the dinosaur samples for his project "Patterns in the growth of the theropod dinosaur genus Allosaurus" at the Student Expo on April 7.

Sombathy became interested in the topic for his master's thesis at Adelphi University in New York. Now he's a doctoral student in biological sciences in the College of Arts and Sciences, pursuing his research with evolutionary biologist Patrick O’Connor, Ph.D., professor of anatomical sciences in the Heritage College of Osteopathic Medicine.

But before Sombathy can get to the exciting part of his work, he first has to collect and prepare the samples, a difficult and time-consuming effort.

"The hardest part of this project has most definitely been the amount of time it takes to acquire and process the data, from obtaining the fossils to finishing the analysis of the slides. For instance, as part of the sampling procedure, we create molds and casts of each fossil prior to cutting into them to preserve the morphology and anatomy of the fossils for future paleontologists. It’s arguably the most important part of the research, so we spend ample time ensuring the molds and casts are of the highest quality we can provide," Sombathy said.

"The downside is that this process can take over two months and is extremely costly, leading to the slower nature of the project. While we did develop some workflows to cut down on the time investment, the fact is that the institutions that lent us these fossils placed their trust in us to return to them materials for future generations of paleontologists to study, and we believe that takes precedent over getting results out of the door quickly," he said.

Even after a slice has been removed from the bone, Sombathy spends weeks using finer and finer sandpaper on an automatic grinder to make the slice thin enough for light to transmit through the bone.

"I’d say that nothing is more exciting that seeing the histology of the bone for the first time. It’s always a surprise, and you never know exactly what is going to be in the slide. But whether it's full of rings or empty, you know it will be exciting!" he said.

"There’s also something special about knowing that you are the first person in a 150 million years to see how an animal grew and lived that is one of the best parts of being a paleontologist."

A Career in the Biology of Dinosaurs

With a dream to become a paleohistologist, Sombathy studied anthropology and biology at Troy University, then earned a master's in biology from Adelphi. His mentor at Adelphi, Michael D’Emic, is a co-author on this project. "He assisted me at every step during the project and was a wonderful advisor who balanced the roles of teaching, researching, and advising perfectly," said Sombathy. He also credits O'Connor, his advisor here at OHIO, "who has also provided phenomenal guidance regarding the future of this project and graciously lent us storage room and supplies for the upcoming expansion of this project."

The storage space is important because Sombathy's project is no small undertaking. A paleohistologist needs a large sample size of fossils to make inferences about the extinct animals’ life history and physiologies. And it's not like he chose a little dinosaur to study.

"My project investigates how an extinct genus of theropod dinosaurs grew by using microscopy to view the histology of fossils attributed to the common large theropod dinosaur Allosaurus.  What really drew me to this project was the idea of performing a large-sample size study using an extinct megafauna like Allosaurus. Generally, in paleohistology we are limited to very small sample sizes due to the rarity of fossils and the destructive nature of paleohistology, so seeing as Allosaurus is known from hundreds of specimens, this offered us the perfect opportunity to perform a really in-depth population analysis for an extinct group of animals that we normally never would have the opportunity to do so otherwise," Sombathy said.

"Most vertebrate animals deposit structures analogous to annual tree-rings in their bones, which we can use to estimate the age of an extinct animal. If the sample is taken from a hindlimb, such as in my study, we can also estimate body mass at each year, as the tree-ring-esque structures record the circumference of the bone. Some preliminary studies have reported exceptionally variable growth found in a small sample of Allosaurus from a single fossil deposit, so what we sought to do was expand the sample size in both number of samples and where those samples were coming from to test three hypotheses and try to determine what was causing that extreme variability."

"All of my lab members have been exceptionally helpful whether it comes to emotional or scholarly support," he noted.