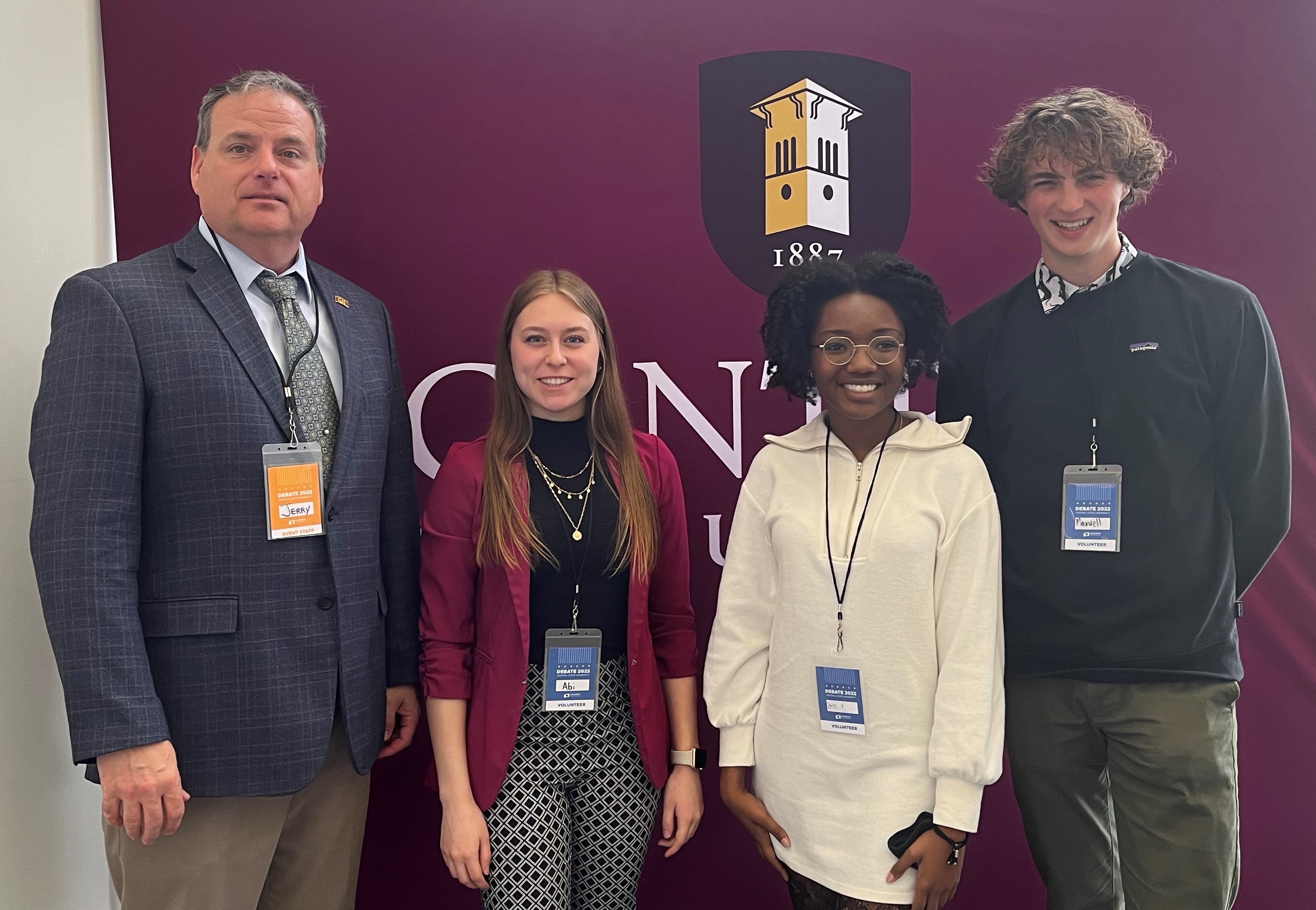 Professor Jerry Miller and OHIO students Abi Scherer, Zoie Lambert and Maxwell Burton are shown at one of the state primary debates.

A group of nine Ohio University students attended the Ohio senatorial and gubernatorial primary debates March 28 and 29, at Central State University (CSU) in Wilberforce, Ohio. The students assisted in event preparation, handled ticketing and media registration, and kept time for the debates.

Zoie Lambert, a junior journalism major, said she participated out of an interest in civic engagement. Her role was to manage the timing for the debates, which she said “kept me on my toes.”

“I knew it would be an exciting and educational experience for me,” Lambert said. “Meeting the students of CSU was a great experience. I also love going to the National Afro-American Museum & Cultural Center.”

Professor Jerry Miller, associate director of undergraduate studies in the School of Communication Studies (COMS), organized the trip and recruited the student participants.

“It is important to provide diverse experiential learning opportunities for our students, especially those who are directly related to engaged citizenship,” Miller said. “Zoie, Abi, and Maxwell worked behind the curtains, interacting with media representatives, university administration, candidates and candidate representatives. Their involvement was a valuable learning opportunity and valuable contribution to civic engagement.”

Senior Honors Tutorial College political science major Abi Scherer said she participated in the trip because of her interest in campaigns and politics. She also hoped to get a look behind the scenes to see how the debates work.

“I think the most memorable part was meeting Tim Ryan, who is running for senate,” Scherer said. “He offered me his sunglasses because the sun was directly on me through the window.”

Freshman journalism major Maxwell Burton learned about the opportunity during his interview for the OHIO Fellows Program.

“We were talking about my passions, which include politics, human rights, communication, etc.,” Burton said. “Dr. Miller offered me [the opportunity] to volunteer at the debates and it seemed like the perfect opportunity. It was.”

Other student participants in the event came as part of their involvement the political communication certificate (POCO) offered by COMS in the Scripps College of Communication.