How one theater group maintains its friendship, even while living countries apart 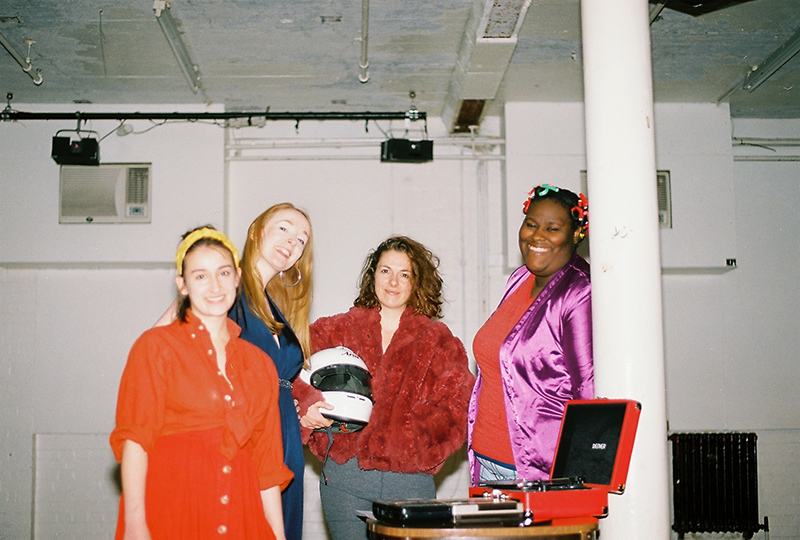 From left to right: Elana Binysh, Stephanie Fuller, Madeleine Lewis and Ally Poole pose for a photo together

According to the four friends of the Hot Cousin theater group, everyone has a hot cousin.

The name was born out of gossip, Stephanie Fuller, a member of the no-nonsense, all female troupe living in the United Kingdom, said.

“If you don’t know who the hot cousin is, then it’s you,” Assistant Professor of Instruction in the School of Theater Ally Poole explained with a laugh.

The group presented a virtual workshop to OHIO students on creating hybrid and devised theater work as part of the College of Fine Arts’ Visiting Artists and Scholars program. They also shared their newest show, “Hot Cousin Mystery Party. “

“When I pitched the potential to bring us here, something that I heard a lot from my students was that they want to know how to make their own work,” Poole said “It's messy and complicated. But also, these are three of my closest friends. So, you just make it work. And I think what was important was to show that we are a collective of emerging artists who are still figuring it out.”

Elana Binysh, a U.K.- based group member, and Fuller both have worked with students before, too: Fuller has been a teacher in secondary school for 13 years, and Binysh has led workshops for young actors.

“Hot Cousin Mystery Party” is inspired by Agatha Christie’s “The Murder of Roger Ackroyd,” a detective novel published in 1926.

“She's just [a] really interesting literary figure,” Binysh said. “Simultaneously, [she’s a] cult part of the canon, but also kind of trashed and not taken very seriously. And we are trashy and don’t take ourselves very seriously.”

The group’s creativity also comes from their own backgrounds and interests, as they are an intersectional company. This show explores themes of true crime, lies and gossip.

“And so, how we can take our interest in gossip and rumors, and distill those to our own lives as well,” Poole said. “And that's part of a lot of our work too, is how we can inject ourselves in the world that we inhabit into our performances.”

The group describes itself as “four gal pals who make shows together and look good doing it,” and draws inspiration from gossip, pop culture and history. But, because of the pandemic, the friends haven’t been together in-person since February 2020.

“Once we understood that this was going to be how it was going to be for a while, we were like, ‘Well, there's actually a lot of really interesting creative potential here for doing something that is kind of a new art form, in a lot of ways,’” Binysh said. “We take everything we love from theater – liveness and intimacy and all of those things, and then think about technology and cinematography and internet culture.”

Poole said the group met in the same master’s degree course at the Royal Central School of Speech and Drama in London and decided to form Hot Cousin in 2018.

“We developed a show and did it in London, all live, and then the pandemic happened,” Binysh said. “It changed everything about the way that we worked. [We] went from seeing each other pretty much every day … to being really far apart from each other.”

Though Binysh and Fuller both live in the U.K., about 40 minutes apart from each other, Poole is in Athens and Madeleine Lewis, another member, lives in Australia.

Making work at a slower pace than they were used to created a learning curve, Fuller said, and because members span across three different time zones, meeting with each other can get tricky. Rehearsals and meetings can take place as early as 6 a.m. for some, or 9 p.m. for others. It’s an intimate experience to become the first or last person you talk to on any given day, Binysh said.

Despite constantly adapting to the changing world around them, Hot Cousin still manages to make time for friendship.

“Yes, it's slower, but it also means that we have been able to keep going,” Binysh said. “People can check in and out as much as they need to, and the others will absorb the work. Because we’re all friends and we care about each other, it just means the whole thing just keeps chugging along.”