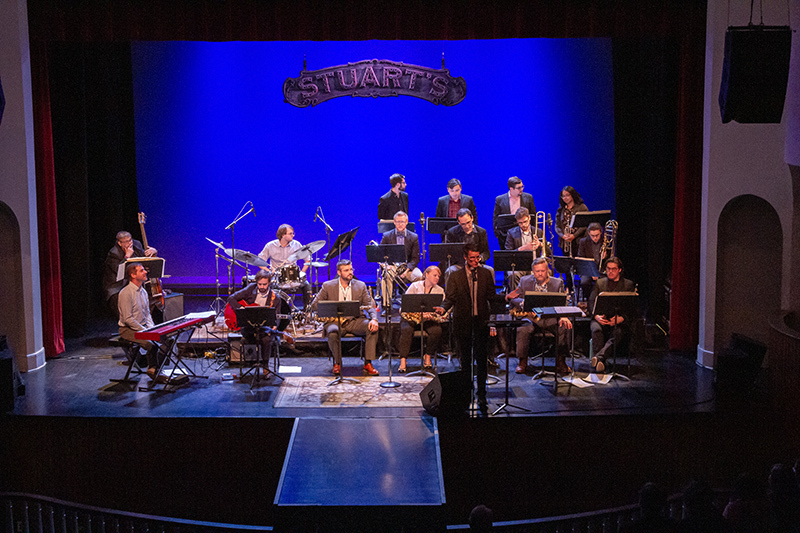 Coming off a virtual event last year, the Athens Jazz Festival was back in-person for its 2022 event.

Offering an intersection between entertainment and education, the festival was a six-day long event with live music performances from Ohio University students, local high school students and career musicians. All events were free and open to the public.

“Playing for a live audience is just remarkable,” Avery Bumgarner, a first-year graduate student in the School of Music, said. “When you’re playing for people, all of a sudden, the band’s playing tighter, we’re more together, playing more musically with more energy. It’s a really interesting phenomenon.”

Bumgarner, a saxophonist, said the jazz festival was “right up his alley” and said one of the best parts about it was the variety of events that were hosted, from small group performances to big band shows, and everything in between.

Steven Heffner, one of 13 professional musicians invited to participate, returned to Athens after being away for six years for the festival.

“I’m excited,” Heffner said leading up to the event. “What I’m looking forward to in coming back to Athens is getting to work with some of the students that are going to be coming to this festival. And just sharing a lot of my experiences and what my perception of how they’re playing the music, and to help them do it better.”

Heffner said his goal in working with music students was to “give them the kind of education that I wish I had when I was young.”

Heffner has performed internationally and toured with several different groups and world-class musicians. He currently works as a teaching fellow at the University of North Texas.

“The Athens Jazz Fest has always been … very much about the education and getting students to a university,” he said. “I think it’s really great to be a part of those experiences for young people, and I think the Athens Jazz Fest provides that.”

Heffner’s first introduction to teaching music was the time when he helped his niece improve her saxophone playing, as she had a crush on the lead saxophone player in high school.

“It was just really cool to help this person achieve some of their goals,” he said. “It was really cool to interact [with my family] in that way, and I think that always colored my perception of teaching as, ‘How do I help you get to where you want to go?’”

Stewart, who passed away in 2017, was inspirational and highly respected OHIO graduate who earned his undergraduate degree in photography where it was rare for Black students to enter into fine arts programs and during a time when mostly white students were enrolled at OHIO. Stewart’s photography has appeared on over 2,000 album covers.

Matt James, the director of the Ohio University’s School of Music Jazz Studies program, began expanding the Jazz Festival a few years ago to get more music into the community, and it’s paid off. This year, James said there are more high schools that participated than ever before.

In the future, James said he is hoping to expand the festival even more and invite additional musicians known on a national level. For now, though, James is grateful to have made great music with the many musicians from the festival.

“I think there’s going to be a lot of professional gains for the students to understand, if they want to take this music to the next level, what might be involved,” James said.