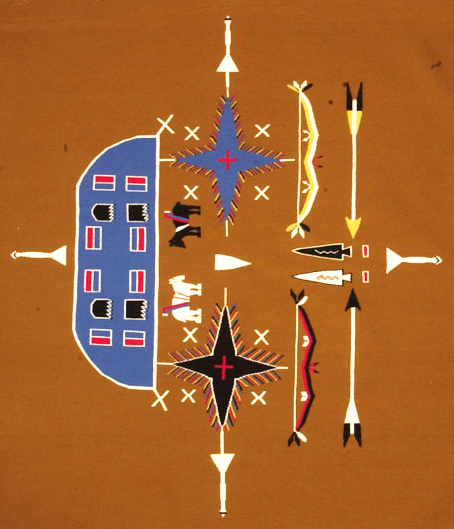 Ohio University’s Kennedy Museum of Art (KMA) blooms into spring with three new exhibitions, all opening on Friday, March 25. The first exhibition, "Representation of Women in KMA Collections," will highlight works that investigate the representation of women and the female form in art; the second exhibition, “Night Skies: Navajo Textiles Depicting Sandpaintings,” will highlight select Navajo textiles depicting sandpaintings; and the third exhibition, “Recent Acquisitions,” will explore works new to the museum’s collection.

‘Representation of Women in KMA Collections’

This exhibition is a student-produced exhibition developed by KMA’s education department interns. The project began in Spring 2021 as an online initiative owing to the museum being closed due to the pandemic. The online version was hosted on KMA’s Museum Experiences Blog space KMA Picks. The main theme of “Representation of Women in KMA Collections” emerged as student interns Madeline Kramer and Tristen Luken combed through thousands of images in KMA’s collections. Both were drawn to a range of works representing women and the female form.

The work to convert the original online project into an installation began in Fall 2021 with the museum education department’s graduate assistants Marissa Stewart and Kelly Hanning joining Luken and other undergraduate interns, Grace Kriger, Carrie Summerford, Emily Van Meter and Addy O’Rourke, in the challenge of designing a three-dimensional visitor experience.

“Transitioning an online exhibition to an in-person experience was an exciting challenge to approach,” Luken said. “When putting together an online exhibition we wanted to include extra information that may not have been included in a traditional exhibition, so the wording had to be changed and adapted for an in-person viewing. We also had to consider the design of the show … [like] color, balance, and space ... [with the online exhibition] it was just the order of the pieces on the screen. I am excited to be able to walk through this show and be immersed in the creations.”

According to Luken, the hands-on experience and knowledge she gained from the project was extraordinary.

“Working with my peers on this show was amazing,” Luken added. “Having the input and help of my team members makes this show so unique and strong. With the combined knowledge and eyes, we were able to work out any kinks and view things from different perspectives to hopefully make ‘Representation of Women in KMA Collections’ a show everyone can enjoy.”

Twelve pieces from the museum’s foundational Edwin L. and Ruth E. Kennedy Southwest Native American Collection (SWNA) make up “Night Skies: Navajo Textiles Depicting Sandpaintings.” The weavings part of the exhibition replicate imagery similar to that of sandpaintings created during traditional ceremonial practices of the Navajo (Diné) people. Called “chants,” “sings,” or “ways,” ceremonies are held for a variety of reasons, including restoration of harmony and balance.

According to KMA’s Curator of Education Sally Delgado, it is important to note that the sandpainting replica weavings are not ceremonial objects and carry neither the meaning nor the healing power that ceremonial drypaintings hold.

“The selected weavings reflect aspects of the Diné view of the universe and feature sky imagery such as constellations, the sun and moon, the Milky Way, and color references to times of day and the four cardinal directions,” Delgado said. “We are opening ‘Night Skies: Navajo Textiles Depicting Sandpaintings’ as we celebrate the spring equinox and invite visitors to spend time with these textiles in our galleries and to explore the outdoor spaces at The Ridges.”

The museum’s SWNA collection includes nearly 700 textiles and more than 2,400 jewelry items, including a series of over 100 weavings containing sandpainting imagery commissioned from Navajo weavers by Edwin Kennedy almost four decades ago. The majority of the sandpainting weavings were made by Red Rock area weavers Despah Nez and her two daughters, Anna Mae Tanner and Alberta Thomas, whose work is showcased in “Night Skies: Navajo Textiles Depicting Sandpaintings.” A weaving by Gladys Manuelito (niece of the famed weaver and ceremonial practitioner Hosteen Klah), and a version of “The Night Sky” by Two Grey Hills weaver Mary Ann Foster will also be on view.

“Recent Acquisitions” will highlight new works accessioned into the museum. Select works will be on view, including photography by Christopher Payne and retired OHIO professor Laura Larson; prints by Burhan Dogançay; a sculpture by Anne Culbert; and numerous ceramic works donated by Professor Emeritus Joe Bova and the International Academy of Ceramics.

“The artwork featured in Recent Acquisitions was donated by artists and collectors and accepted by KMA’s collection committee,” KMA’s Registrar Lisa Quinn said. “The new accessions will serve KMA’s mission to enhance the intellectual and cultural life of Ohio University and the region through exhibitions, collection-based research, and diverse formal and informal learning opportunities. The variety of mediums including prints, photographs and ceramics allow those activities in multiple discipline areas.”