Lindsey Martin is an assistant professor at Ohio University School of Film who teaches students about screenwriting, film production, digital animation, and film criticism. While Lindsey is an inspiring teacher to many of her students, she is also an accomplished filmmaker. She recently completed her latest animation film, Pottero.

Lindsey grew up with a tale about a monster called Pottero. In the beginning Lindsey thought everyone knew what the Pottero was, but shortly after her initial research she came to discover that this monster she feared as a child was specifically her own family’s folktale. But the Pottero is about so much more than just a childhood folktale. Suicide rates in rural America have been steadily increasing over the past few years, and a couple years ago Lindsey tragically lost her uncle and godfather, who took his own life. With his loss and her return to the rural region, Lindsey started thinking about the Pottero again. The loss of her uncle, his struggles and her grief made her think about all the circumstances that led to his choice, or if this was a choice at all. “Monsters are fears and a manifestation of what we cannot explain and the sort of feelings we don’t like,” Lindsey explains. But giving the monsters a visual representation makes them less scary. The scariest monsters are the ones that we never really see. By creating a physical monster, it becomes something that is in one’s control. This idea also inspired a community-based workshop:

“My hope is this story will inspire others to tell their own monster tales through a series of community animation workshops being developed in partnership with the Ohio Valley Center for Collaborative Arts. Giving people the tools and agency to tell their own stories is imperative to changing representation of Appalachia and to raise questions about our identities, the relationships to the locations we come from, and all those monsters waiting for us there.”

No one in her family really knew what the Pottero looked like. When Lindsey was a kid the Pottero felt like something that could actually exist in the mountains. The animated Pottero in the film is shaped by her family’s interpretations and her own interpretations of the monster. The Pottero is a mixture of a fantastical beast that is rooted in reality, like many of our own monsters. Most of Lindsey’s family has seen her film and it gave them an opportunity to talk about their grief and honor her uncle. 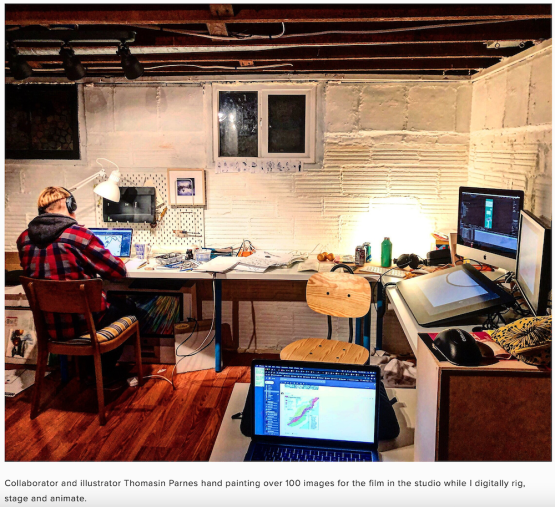 The journey of Pottero was a three-year process. Production was lengthy because Lindsey chose a very ‘archaic’ way of working. Each individual object was hand drawn in ink by illustrator Thomasin Parnes and then digitally be processed in high resolution by Lindsey. Each scene has 200 to 300 layers. Lindsey’s choice of a scrolling frame was unconventional and a difficult way of storytelling. But it imitates the idea of how time moves during a journey, how it can feel so slow to us. at times.

Since the Pottero is a monster, it could take many different shapes. So, animation was the best choice for this film because it can represent those many shapes perfectly within the world of memory, fantasy, or fear. The opening scene of the film, which shows a suicide, is very powerful. As an audience member, it would be hard to process that in live action, and then getting through the next ten minutes of the film could prove impossible. Animation builds a barrier that prevents us from experiencing that. It is still difficult, and it is still a version of the real thing, but the association of cartoons from childhood offers a way to tell this dark tale.

It screened in many rural places, like Ax Wound Film Festival in Brattleboro, Vermont and in working class communities. One of these exciting places is Anchorage, Alaska, where Lindsey was impressed by the connection between Pottero and the Indigenous community. Most recently, Lindsey’s film won first place at the James River Film Society in Richmond, Virginia. This March, Lindsey will travel to Ireland for a screening of Pottero, where she is excited to explore the Irish folktale culture.

Lindsey’s advice to young filmmakers: when you get into festivals, enjoy that time and really listen to your audience, because that is where all that joy comes from. Go there and be there: putting your face to the audience and feeling their energy is part of the filmmaking experience and inspiration.

More about Lindsey Martin and her work: http://www.lindseymariemartin.com