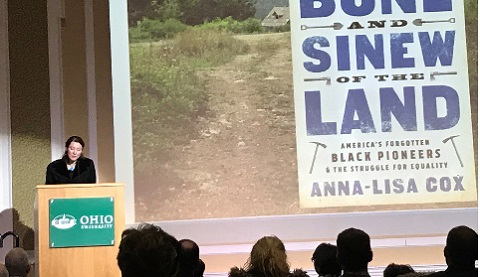 Ohio University is restarting the Central Region Humanities Center, which was created in 2001 with support from a National Endowment for the Humanities grant.

With an emphasis on Southeast Ohio, the center is setting out to establish strong ties with academic programs, provide student experiential learning opportunities, support graduate and undergraduate students and engage with community organizations.

College of Arts and Sciences Dean Florenz Plassmann and Provost Elizabeth Sayrs have approved a relaunching of center activities beginning in 2022.

“Our goal is to re-establish the center not only as an agent of regional understanding, but also as a clearinghouse for exchanging regional research and program ideas, as well as a facilitator that will enhance the work of other organizations and preserve their resources,” Plassmann said.

Top items on the committee’s agenda include discussion of an annual speaker series and an interdisciplinary biennial conference, both of which will focus on the rich culture and history of the local region.

Most recently, the center hosted a popular two-day conference on Ohio Settlement: First Nations and Beyond, which brought together faculty and staff from multiple departments across the University and drew hundreds of community members to campus in 2020.

“Now we want to become more active in creating a center that regularly brings together campus and community members and fosters research and collaboration about the specific history of our region – from the first people more than 13,000 years ago to the development of the Northwest Territory through the portal of Southeast Ohio,” said Katherine Jellison, Ph.D., center director and professor of history at Ohio University.

Jellison noted that the conference about settling Ohio also led to the development of an early version of a tour of the Black History of Athens through mAppAthens, which traces how early African Americans helped shape the cultural and intellectual landscape of the region.

“Through the center, we have opportunities to examine freedom and slavery in the early- to mid-19th-century Ohio River Valley and contribute to the diversity and inclusion conversation on campus and beyond,” Jellison added.

“Over the next three to five years, the center will provide considerable support to the University’s academic mission and community outreach,” Plassmann said. “For example, the center might promote, in conjunction with Alden Library, digital humanities projects that are relevant for the area, like the digitization of local histories and feature series of local writers and local art. The center might also partner with WOUB on programming.”

In addition to a director, the center will have an advisory committee including faculty from African American studies, English, fine arts, geography, history, journalism, and sociology and anthropology, as well as representatives from a number of institutions outside Ohio University, such as the Hopewell Culture National Historical Park, the Mount Zion Baptist Church Preservation Society, the Ohio Department of Transportation, the Southeast Ohio History Center, the Tablertown People of Color Museum and the Underground Railroad Museum in Flushing, Ohio.