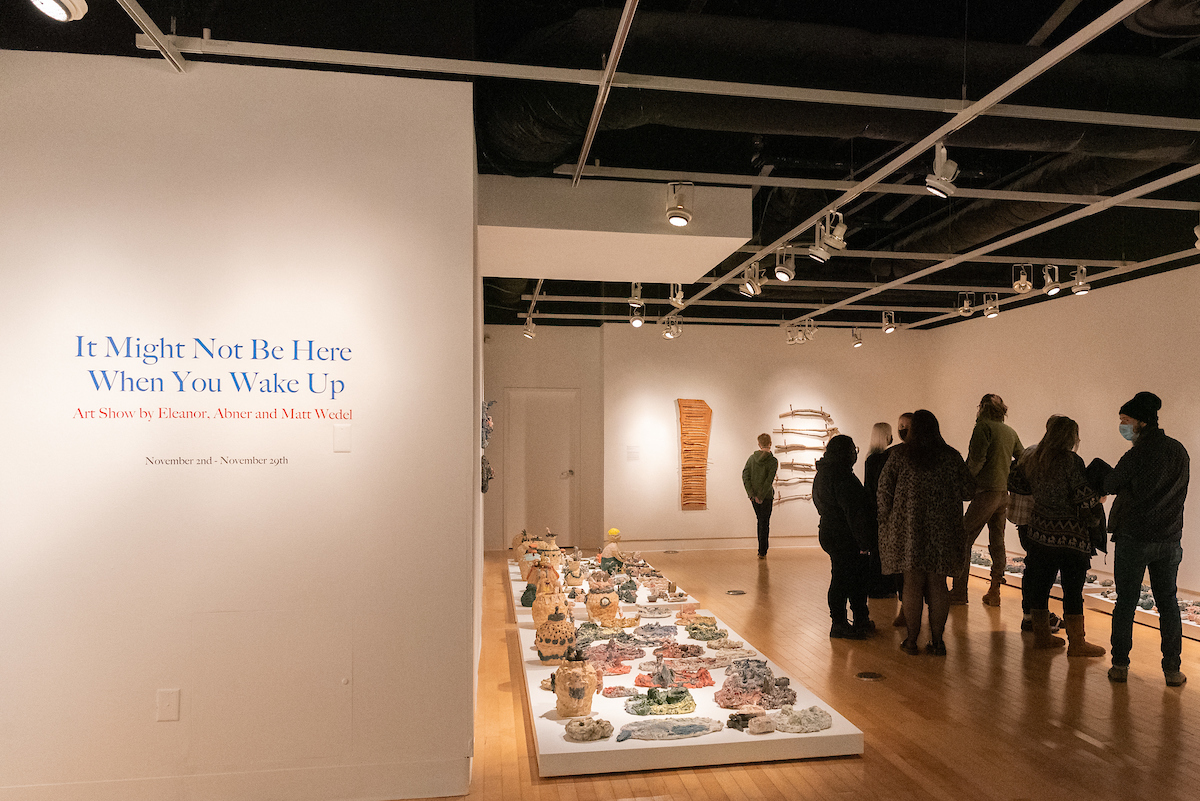 Laura Bilson Image from current the exhibition, “It May Not Be There When You Wake Up” at the Trisolini Gallery in the Ohio University’s Baker University Center.

Eleanor Wedel has a simple explanation for why she decided to name her sculpture “Unicookie.”

“It Might Not Be Here When You Wake Up,” an exhibition that was on view through Nov. 29 in Baker University Center’s Trisolini Gallery, featured local artist Matt Wedel and his children, Eleanor and Abner Wedel’s art. All proceeds from the exhibition will go to the Albany (Ohio) Neighbors Park Fund to construct a new park.

After the start of the pandemic, Matt Wedel and his wife, Coral, a fashion designer, started to homeschool their children Eleanor and Abner full time, giving them a chance to work alongside Matt and create their own work within their respective studios.

Matt Wedel said the collection began with his work creating abstract sculptures to explore how the human mind searches for images in the abstract.

“It started out as me doing my serious artwork … sifting through my own philosophical landscape,” Matt Wedel said. “And then Eleanor being like, ‘Daddy! Can you make me a doll?’ … A lot of the work was about me choosing to stop and go make this thing with her.”

As Eleanor Wedel confidently points out the first doll made in the collection, Matt Wedel explains how through working with his daughter, he found the answers of what he was searching for in his abstract work.

“The work that was taking place was our own growth as beings, as beings in the world trying to understand how our minds think,” Matt Wedel said. “The residue of that growth becomes the object.”

Matt Wedel said working with his children continually challenged him in unexpected ways, and inspiration came from everywhere, including family friends to make-believe characters.

“We had this rule, (the sculptures) were all laying down,” Matt Wedel said. “And then the kids would do things like flip them up to challenge the rule … they became a part of the creative gesture (which is) this evolving thing.”

In addition to the exhibition, Matt Wedel served as a juror for the Undergraduate Juried Exhibition where 200 pieces of art were submitted by 78 students. He selected 43 pieces in total.

“As I was curating the show … it wasn’t judgment about what’s good and bad art,” he said. “For me, that’s not what it’s about. As I was sifting through those works, it was about which ones stuck to my own arguments and which ones expanded my own arguments."

Matt Wedel also gave a lecture on Nov. 19 in the Mitchell Auditorium where he explored “creativity in the context of being alive and being curious.”

“I want my interactions to be an act of becoming, not a performance or a prescription,” he said.

Courtney Kessel, assistant director of Experiential Design for OHIO and formerly the College of Fine Arts gallery director, said she was inspired to invite Matt Wedel to OHIO’s galleries to exhibit his work because of his background as a local artist.

“Being a local artist, being in Appalachia, but having a practice that is international and having gallery representation in Los Angeles, it’s interesting to see that can be done locally,” Kessel said. “You don’t have to live in a major city in order to be a successful artist.”

Kessel said the role of mentorship in art is crucial and that it’s important to give students that experience.

“He cared about community, and he cared about his ecological community,” St. John said. “That was the thing that I just really loved about seeing that space.”

They said Matt Wedel’s work was integrated into his home, gardening, and landscaping.

“You got this sense of this energy that was in this place, and this place of artistic intention,” St. John said. “I immediately responded to it.”

St. John said the energy and dedication Matt Wedel brings to his work makes him a great fit to work with students.

“He’s incredibly knowledgeable about his craft,” St. John said. “At the graduate level, really being able to see his process … that was one of the most valuable things out of the whole experience. Just seeing his operations and seeing how smart he was about moving through his operations.”

St. John also saw Matt Wedel’s exhibition launched at Trisolini Gallery after seeing it in his studio. Their favorite pieces in the show were the wands made by Matt Wedel’s son, Abner.

“There’s two layers of the meaning of the show,” Matt Wedel said. “On one hand, (it’s) challenging my own concepts of art by allowing my kids to be a part of my practice in the world. Rather than the generally egotistical framework of art as this high commodity artifact for the privileged or the future … it’s a personal meditation on that as a way to cherish these things in the now.”