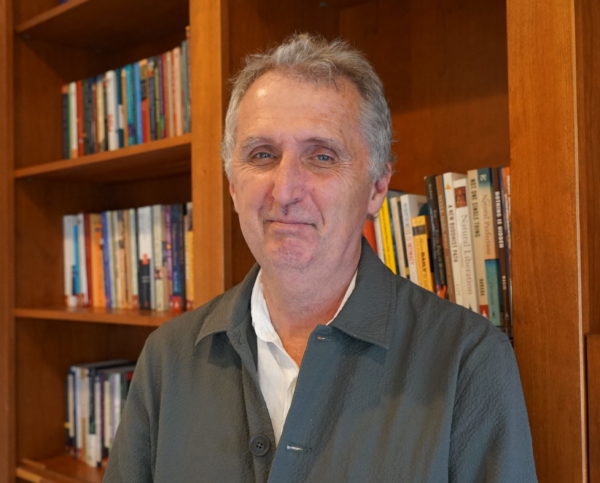 Charles Hallisey is a strong believer in the power of translation.

An expert on Buddhist Literatures at the Harvard Divinity School, Hallisey said his time studying in both the United States and Sri Lanka led him to study Buddhism through the lens of its literature and the translation of text.

Hallisey’s presentation, “Gained in Translation: New Understandings of Ourselves,” was offered virtually to Ohio University students and the public in October as a part of the College of Fine Arts Visiting Artists and Scholars Series. At Harvard, Hallisey sources everything from Buddhist novels to Buddhist movies for his classes. His lecture at OHIO included materials from his own translation of Buddhist novels and movies and translations of non-Buddhist work, too.

“The point of a translation isn’t to understand primarily another world that you won’t have access to otherwise. Instead, it’s to give you resources for understanding yourself,” he said.

Hallisey initially became interested in studying Buddhist culture and religion during his sophomore year of college when he began learning from a Sri Lankan teacher.

“As I learned more… I saw things I was learning about the Buddhist world (and) Buddhist ways of seeing the world. It helped me to make sense of things that had happened to me,” he said.

One of these things, Hallisey said, was experiencing the death of his father at a young age.

“My initial engagements and learning from things in the Buddhist world were about human nobility in the face of death,” he said.

Garrett Field, Ph.D., assistant professor of ethnomusicology and musicology in the College of Fine Arts’ School of Interdisciplinary Arts, said he invited Hallisey for this year's interdisciplinary seminar entitled, "Text, Translation, and the Arts."

“Right away, I thought of Professor Hallisey because I knew him as president of the American Institute of Sri Lankan Studies (part of the Washington, D.C.-based Council of American Overseas Research Centers) when I was doing research in Sri Lanka,” he said. “I have read introductions in books written by Hallisey’s students. In these introductions, Hallisey’s student will say, ‘Professor Hallisey taught me how to read.’ I was interested in giving our students in the school an opportunity to learn about Hallisey’s approach to reading and translating.”

Field said Hallisey’s chapter, “Works and Persons in Sinhala Literary Culture” about Sinhala literature published in Literary Cultures in History, Reconstructions from South Asia (2003) made a big impact on him when he was a graduate student.

“I invited him because the article is a wonderful example of using his translations to write about the history of Sinhala literature,” Field said.

Field emphasized the importance of exposing students to these scholars who have forged their own paths with their research. Students also had the opportunity to meet with Hallisey via Microsoft Teams individually before and after the lecture. Field said through meeting these scholars, students can begin to form relationships and network within their respective fields.

“The students who share similar interests in topics or issues get the opportunity to interact with this world-class scholar… so that’s one of the great things about this,” Field said.

Second-year doctoral candidate Paul Peters said what stood out to him about Hallisey’s lecture was how many examples he used to explain linguistic patterns.

“He provided a lot of opportunities for us to really fit in where our specialization areas might work or give us starting points where we can apply it to what we’ve been studying,”  Peters said.

Peters added that although his area of interest is film studies, other disciplines like history, philosophy and sociology, provide important context.

“The triumph of interdisciplinary arts is that you’re not encouraged to stay in a bubble… I think there’s an importance of [learning about] other disciplines within everyone’s research and work here,” Peters said. “It provides imperative context to understanding different phenomenon in the arts and bringing in these guest lectures demonstrates different approaches that can be easily used and adapted to understanding different aspects of the arts.”