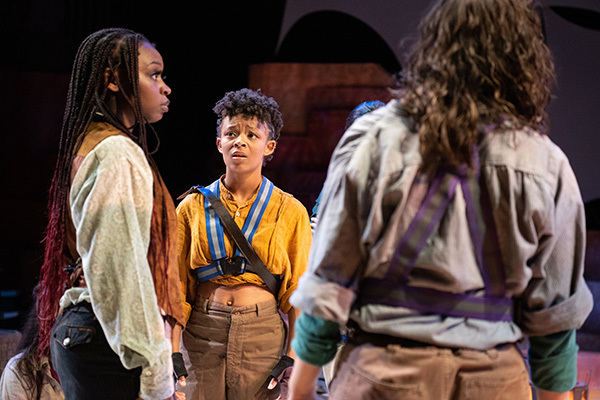 The College of Fine Arts’ School of Theater and the new student-run Vibrancy Theater will present live, staged shows in Athens for its 2021-2022 season.

Beginning Oct. 28, the School of Theater will open its season with a production of Tennessee William’s Summer and Smoke at the Elizabeth Evans Baker Theater in Kantner Hall. The work is a simple love story about a somewhat puritanical Southern girl and an unpuritanical young doctor, who although attracted to the other, are driven apart over the years due to their divergent attitudes toward life. It isn’t until the end when the doctor realizes that the girl's high idealism is ultimately right, and while she is still in love with him, it turns out that neither time nor circumstances will allow the two to come together.

Director Sarah Yorke hopes audiences embrace a sense of relief from difficulties they may have experienced in 2020 after seeing the play.

“My hope is that they are left with a feeling of self-reflection and the freedom to let go of the painful memories holding them hostage in their own bodies,” said Yorke, an MFA candidate in the School of Theater’s Directing program and an MAA Theater Production and Management candidate. “After an incredibly difficult year, folks need a release from the all-consuming feelings of loss, grief and longing. I hope this production gives them permission to breathe again and move forward in life, without the pain and fear of their past ultimately holding them back.”

The newly formed Vibrancy Theater will also present its inaugural work at the Forum Theater in the Radio Television Building (RTV) with Absentia, written by OHIO alumna Olivia Matthews, MFA ‘20, and directed by Tanisha Lynn Pyron. Vibrancy Theater is a student-run theater organization designed to provide a sustainable space for BIPOC student theater artists in order to support and amplify BIPOC voices, stories and artistry in the spirit of authenticity and excellence.

Absentia touches on themes of longing and reunion. After living in the secluded Florida woods with only her father and pet rabbit Robyn, 20-year-old Esther Harris dreams of being reunited with her long-lost mother. When her father kills her beloved Robyn, Esther breaks out of their cabin in search of her mother and old life. While they soon find each other, can the abandoned and abused Esther adjust to her new life with her mother?

Next in the season’s lineup is the School of Theater’s production of Branden Jacob-Jenkins’ Everybody, directed by Roberto Di Donato, a student in the MFA Directing program. According to Di Donato, the play is a modernization of an ancient script – one of the oldest on record in the English-speaking world. Cast members in Everybody play a character’s part as chosen by a lottery at each performance. Each character takes a journey through life‘s greatest mystery: the meaning of living.

Di Donato says he hopes audiences leave the theater with their own take away.

The mainstage season ends April 14-23, 2022, with the 28th Annual Seabury Quinn, Jr. Playwrights’ Festival, featuring works by MFA Playwrights Klae Bainter and Ivan Mosley. Other plays in progress are presented in semi-staged readings. Each performance is followed by a talkback with guest artists. The festival takes place in the Elizabeth Evans Baker Theater. Titles and performance times will be announced in early spring 2022.

“The School of Theater is proud to produce this rich selection of work by these amazing directors and playwrights and its talented students for the OHIO community audience and beyond,” School of Theater Director Merri Biechler said.

Tickets will be available for purchase online soon. Check this webpage for links to buy tickets for each show. Tickets are also available at the venue’s box office before each show begins. The College of Fine Arts’ Arts for OHIO program allows students with an OHIO ID free admission to School of Theater’s mainstage productions and other arts programing supported by the college.