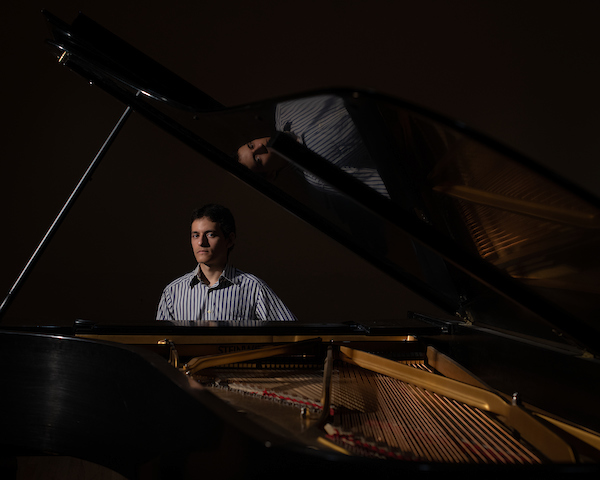 Coming to Athens, Ohio from Venezuela can be a major culture shock, but for Alejandro Orta, one thing remains the same everywhere – the 88 keys on a piano.

Orta, a native of Caracas, Venezuela, is a piano prodigy who started playing piano at the age of 7 when his mother bought him a keyboard and taught him songs as a child. Since then, music and the piano have played a huge part in his life, a universal language he wanted to share with the world.

“From a very young age, I felt a strong attraction and interest in music,” Orta said. “When my mother bought me a keyboard with which she taught me songs as a child, my curiosity grew. Then I began my music studies at a conservatory where I finally discovered my passion.”

While studying piano in Caracas, Orta met Laura Silva, a fellow pianist who would play an integral part in helping him achieve his goals.

“The piano world in Caracas is big and small, so when Alejandro started studying under my first teacher, Elizabeth Guerrero, I learned about his talent and was impressed he played like the recordings at such a young age,” said Silva, who is currently working toward her Ph.D. in Interdisciplinary Arts in OHIO’s College of Fine Arts. “We got to know each other more when he came to the Escuela de Musica Mozarteum Caracas to study with Carlos Urbaneja, the piano teacher I graduated with in Caracas and who I later assisted in his studio for many years. While I was working there, he became part of my piano ensemble class. I had him in the project, so we worked together and played concerts together. He was a very devoted piano student, always so excited about the repertoire and pianists.”

This friendship is how Orta learned about the opportunities to study piano at OHIO. Through remaining in communication with Silva as she pursued her masters in Athens, they would discuss the high academic level of the faculty, the excellent programs offered, and the attention and support offered to international students. The support and opportunities Silva was experiencing and sharing with Orta led him to want to pursue his studies at OHIO.

He talked more with Silva about the possibilities of studying at OHIO and sent in recordings to piano professor and director of the School of Music Dr. Christopher Fisher, whose positive feedback encouraged him to apply to the university.

“It made me very excited that this great professor was interested in my recordings and in supporting me to achieve my goals and carry out the process of applying to the University, which I did with a lot of effort and enthusiasm,” Orta added. “From that moment I got great support from two angels who crossed my life. Once the application process was completed, I got admitted into the University.”

Fisher had already been working with Silva for years and acting as a mentor to her – he was even the reason Silva was studying at OHIO in the first place. After reading one of Fisher’s books on piano and using it in her thesis of her first master’s, she wanted to study under him directly. She got that opportunity in the fall of 2017 and completed her master’s degree in piano performance and pedagogy before starting work on her Ph.D.

“It is absolutely lovely for Ohio University to experience this generational lineage of outstanding piano students from this country that has produced so many extraordinary pianists and musicians,” Fisher said.

To have the opportunity to study at OHIO was a long and arduous process for Orta, though, with several individuals helping him along the way. From the time he had first learned about OHIO until now, several years passed figuring out and taking the proper procedures to bring him to the Athens campus.

First, to apply to OHIO, Orta had to take an English test to assure he would be able to study at an English-speaking university. After practicing this new language for him and passing the English test, Orta applied, was accepted, and started the process of getting paperwork and his visa approved, as well as arranging the trip to Athens. This meant having to sort out numerous challenges due to the ongoing crisis in Venezuela, like having to go through several other countries to both get his visa approved and make the trip itself, all while managing the challenges of a global pandemic. To accomplish many of these tasks, Orta pursued fundraising efforts to help cover costs, and was supported by many individuals across campus who helped him identify scholarships and financial aid support for his studies.

“I am thrilled that Alejandro is finally a part of our outstanding community of student musicians here at the Ohio University School of Music,” Fisher said. “His musicianship and international perspective will surely enrich our vibrant learning environment here, and I know he will also benefit by being surrounded by like-minded student colleagues within the School of Music who are equally committed to being artistic agents of beauty and catalysts for positive change in the world.”

Since arriving in the United States, Silva has helped Orta get accustomed to American culture and maneuver his way around Athens, running errands together and explaining anything he is curious about.

“Venezuela does not offer the quality of life for a young pianist that is really necessary to help him succeed,” Silva added. “So I’m happy he is here working under Dr. Fisher and other amazing faculty where he can live life and have the opportunities to further his playing and be the amazing and dedicated pianist he is.”

Through his studies at OHIO, Orta hopes to obtain knowledge that allows him to grow both professionally and personally while learning from and interacting with people and professors from different cultures.

“I am very fortunate to receive classes with excellent teachers, as well as being admitted to study in the special Honors Tutorial College program, which allows me to develop technical and musical skills on the piano and expand my musical knowledge that is going to significantly contribute to the achievement of my goals,” Orta said.

In his first few weeks on campus, Orta said he has felt a lot of curiosity and has been adapting easily thanks to the support and help that the professors and members of the different departments have given him.

“As is the case with all my students, my goal is to work alongside Alejandro to enhance and elevate his existing skills and musicianship while building and expanding his repertoire,” Fisher added. “I also seek to identify opportunities for Alejandro and all of my students to share the transformative power of our art with a broader audience. Part of this will be participation in competitions and other festivals.”

Fisher said Orta is the laureate of many piano competitions and has already performed with most of the leading orchestras in his native Venezuela. As a winner of the inaugural Ohio University High School Concerto Competition, he will perform Franz Liszt’s virtuosic Piano Concerto No. 1 in E-flat Major with the Ohio University Symphony Orchestra during the spring 2022 concert season.

“I am very happy and honored to be able to express my gratitude for being here,” Orta said. “I first thank God and Our Lady for putting Dr. Fisher on my path, who has always trusted me unconditionally, and Laura, who supported and guided me in a special way since the beginning of this process. I also thank Dean Dr. (Donal) Skinner for his great support and interest, as well as thank Breanne Sisler, Andrea Tinajero, and all the members of the University for responding and clarifying all my concerns. I especially thank my professor Carlos Urbaneja and Elizabeth Marichal, the director of the Escuela de Música Mozarteum Caracas, for being there with me during these years.”

“I thank my parents for the support and faith they had in me from the moment I conceived music as part of my life,” Orta added. “My father with his musical knowledge helped me to reinforce the conservatory classes at home. They were present at all times in my musical training, guiding me to make the best decisions with love and dedication for my spiritual and intellectual growth.”