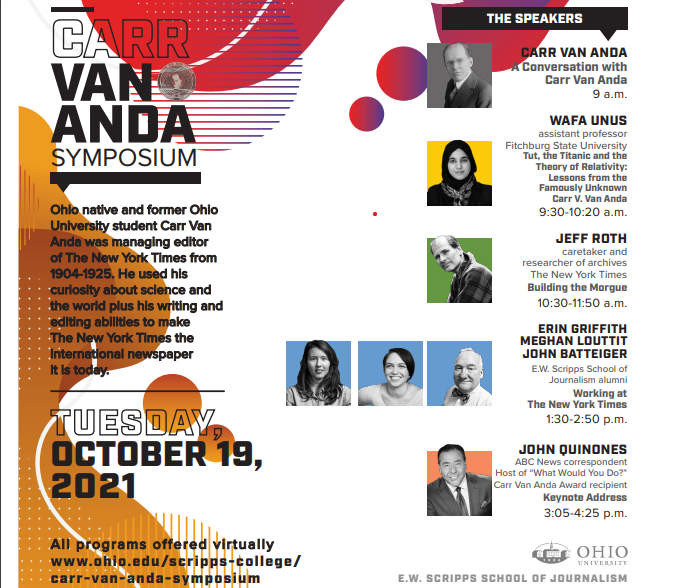 When he came to Athens near the end of the 19th century, Georgetown, Ohio, native Carr Van Anda was already a seasoned journalist. But his greatest achievement was yet to come — managing editor of The New York Times during the great New York newspaper wars of the early 20th century.

The E.W. Scripps School of Journalism is honoring the former physics and mathematics student by hosting the Carr Van Anda Symposium on campus Oct. 19.

The symposium was originally scheduled for April 2020 and was rescheduled twice due to COVID.

“We are thrilled to finally bring this slate of speakers to campus,” said Nerissa Young, journalism associate professor of instruction and chief planner for the event. “As we look toward a century of journalism instruction on campus next year, it’s worth looking back at a man whose love of science, innovation, and fact-based reporting led the way forward during the sensational era of yellow journalism.”

The day’s events begin with a recreated conversation with an actor portraying Van Anda in his office at The New York Times, followed by a look at his contributions to journalism from Fitchburg State University assistant professor Wafa Unus. Jeff Roth, caretaker and researcher of archives at The New York Times, will share the importance of maintaining newspaper records; Van Anda started the archives during his tenure. After lunch, the journalism school will welcome home three alumni who now work at The Times: Erin Griffith, a correspondent based in San Francisco; Meghan Louttit, deputy editor of the Metro section; and John Batteiger, deputy managing editor of The New York Times News Service. The event wraps up with the presentation of the Carr Van Anda Award to ABC News correspondent John Quiñones and his keynote address.

“Just as Carr Van Anda introduced a scientific approach to news gathering, John Quiñones opened the eyes of many TV news viewers about aspects of American society that were being ignored because of racism and ignorance,” said Dr. Eddith Dashiell, journalism school director. “I remember watching Señor Quiñones on ABC at the beginning of his journalism career, and I am excited he’s coming to Ohio University to share with our students and the Athens community his experiences as a Mexican American journalist from the time he was ‘judged by the color of (his) skin and the accent of (his) voice’ through his success as a revered news correspondent.”

Van Anda’s interest in newspapers began at age 6 when he shared with family a “newspaper” collection of clippings he had gathered, according to his New York Times obituary. As a teenager, Van Anda bought his own printing press and produced The Boys' Gazette in Wapakoneta after his family moved there. He was a student at Ohio University for two years where he studied mathematics and physics. Van Anda worked in printing and reporting at newspapers in Wapakoneta, Cincinnati, Cleveland and Baltimore.

At age 24, he arrived in New York to work for Charles A. Dana, editor at The Sun, his obituary reported. In 1904, Adolph S. Ochs hired Van Anda as managing editor for The New York Times, where Van Anda spent the remainder of his career. He embraced science and technology; The Times became the first American newspaper to use telegraph reports from Europe and to cover science, exploration, and discoveries on a regular basis.

He decoded Egyptian hieroglyphics after the discovery of King Tut's tomb and found a mathematical error that Albert Einstein made while giving a lecture at Princeton University on his Theory of Relativity. After being made aware of the error, Einstein responded: "Yes, Mr. Van Anda is right. I made a slip in transcribing the equation on the board."

Due to COVID, public tickets to the symposium are not available. However, the symposium will be available via Zoom. Visit the website at https://www.ohio.edu/scripps-college/carr-van-anda-symposium for more details.