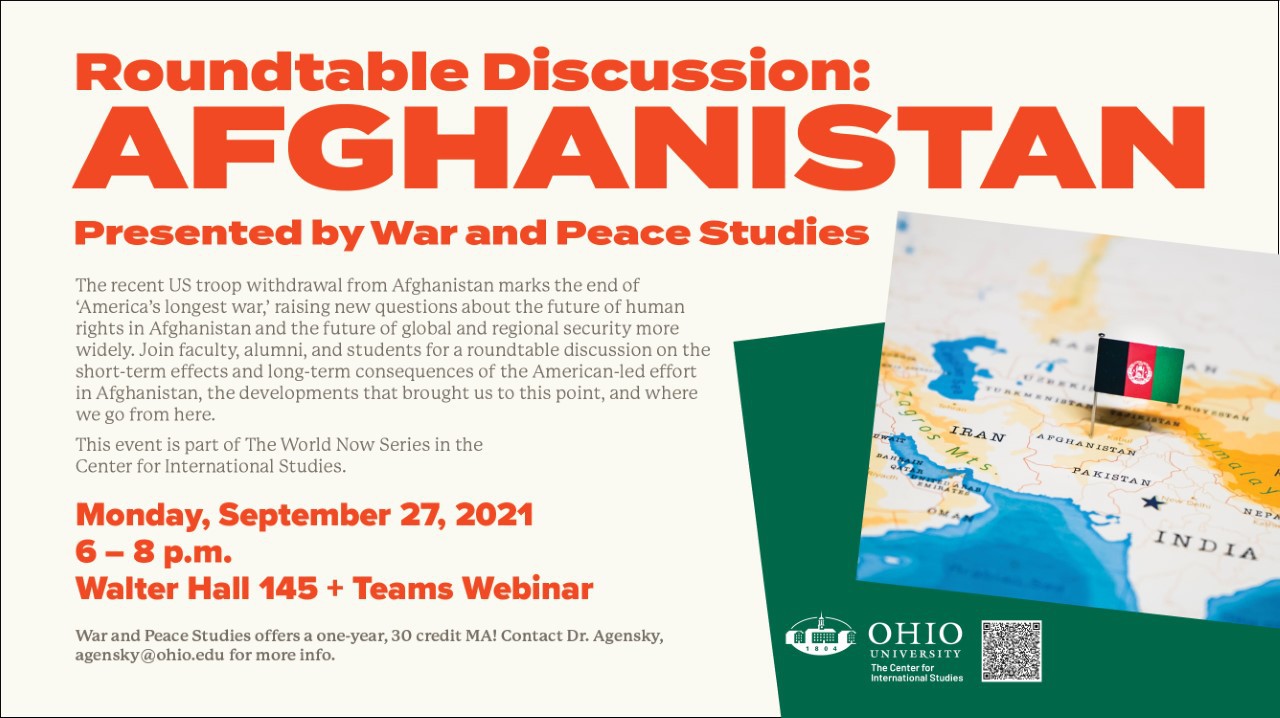 Ohio University’s War and Peace Studies program and The Center for International Studies (CIS) will present a Roundtable Discussion on Afghanistan on Monday, Sept. 27, from 6 to 8 p.m. in Walter Hall Room 145, and available virtually to the public via Microsoft Teams.

In the face of a disordered withdrawal and incomplete evacuation, marked by the collapse of the U.S.-supported Afghan government and reassertion of Taliban rule, faculty, alumni, and students will join a roundtable discussion on the short-term effects and long-term consequences of the American-led effort in Afghanistan, the developments that brought the U.S. to this point, and where to go from here.

The recent U.S. troop withdrawal from Afghanistan marks the end of “America’s longest war,” raising new questions about the future of human rights in Afghanistan and the future of global and regional security more widely. It has also intensified scrutiny on the U.S.-led Global War on Terror, military intervention, and democracy promotion, as well as the human costs incurred by such activities.

This event is presented by the War and Peace Studies program, as part of “The World Now” Series in the Center for International Studies. “The World Now” series explores current events around the world by way of conversations led by OHIO faculty, students, alumni, community members, and guest speakers. It reflects CIS’s ongoing commitment to global engagement and dialogue.

“This is an opportunity for students to learn about current events directly from people with experience in Afghanistan, including Afghan civilians, U.S. veterans, and military members. Students will listen to multiple perspectives on the conflict, including Ohio University faculty who teach about the history of Afghan Wars, Middle East politics, national security, military science, and terrorism,” said Dr. Catherine Cutcher, assistant director for undergraduate programs in the Center for International Studies.

Moderated by Dr. Jonathan Agensky, political science professor and director of War and Peace Studies, the list of participants features individuals with historical expertise, as well as those with experience on the ground in Afghanistan, including Afghan civilians and people who have worked in civil society, and U.S. veterans and military members.

The discussion will feature key themes like human rights and democracy in Afghanistan, strategic and moral successes and failures of U.S.-led efforts, reprisals and harsh repression of women and girls, evacuation of Afghans who worked with international efforts, refugee flows, sacrifices made by veterans and their families, and more.

“We are grateful for the support of the Veterans and Military Student Services Center in helping us to organize this event and assist with outreach to students who have served in Afghanistan,” Cutcher said.

Pizza and beverages will be served at the event, co-sponsored by the War and Peace Studies Program and the Veterans and Military Student Services Center.

Counseling and Psychological Services staff will be available during the event to provide support to participants.

Learn more about the War and Peace Studies program, including its new one year, 30-credit hour master's degree. For more information, please contact Agensky at agensky@ohio.edu.