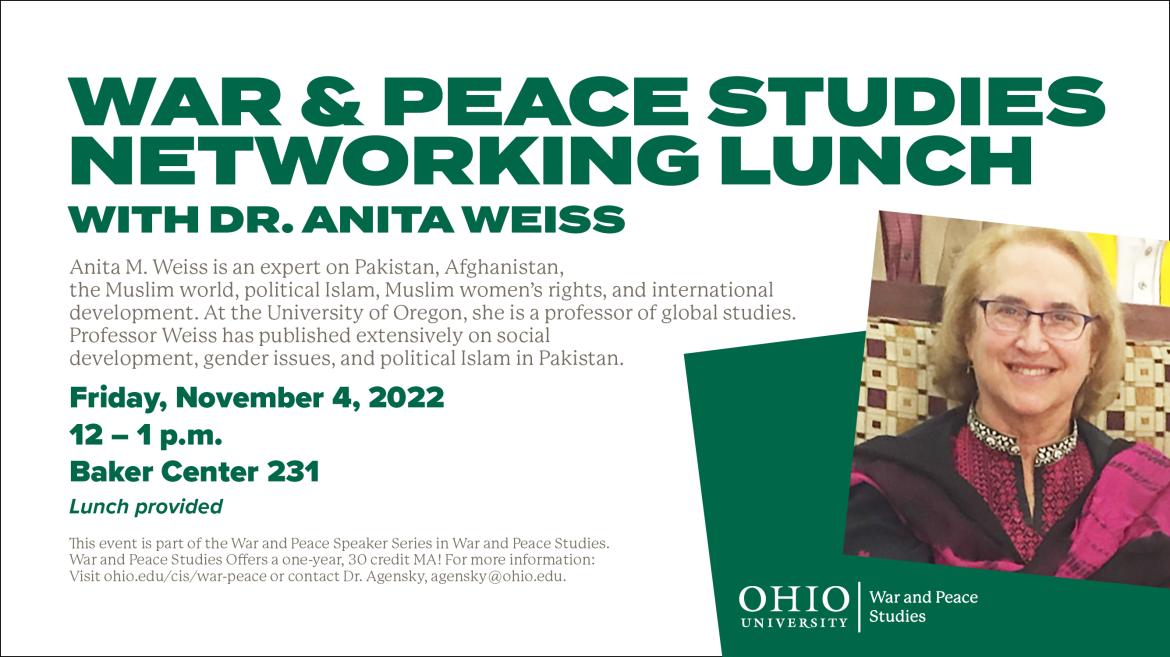 Anita M. Weiss is an expert on Pakistan, Afghanistan, the Muslim world, political Islam, Muslim women's rights, and international development. At the University of Oregon, she is a professor of global studies. Professor Weiss has published extensively on social development, gender issues, and political Islam in Pakistan. 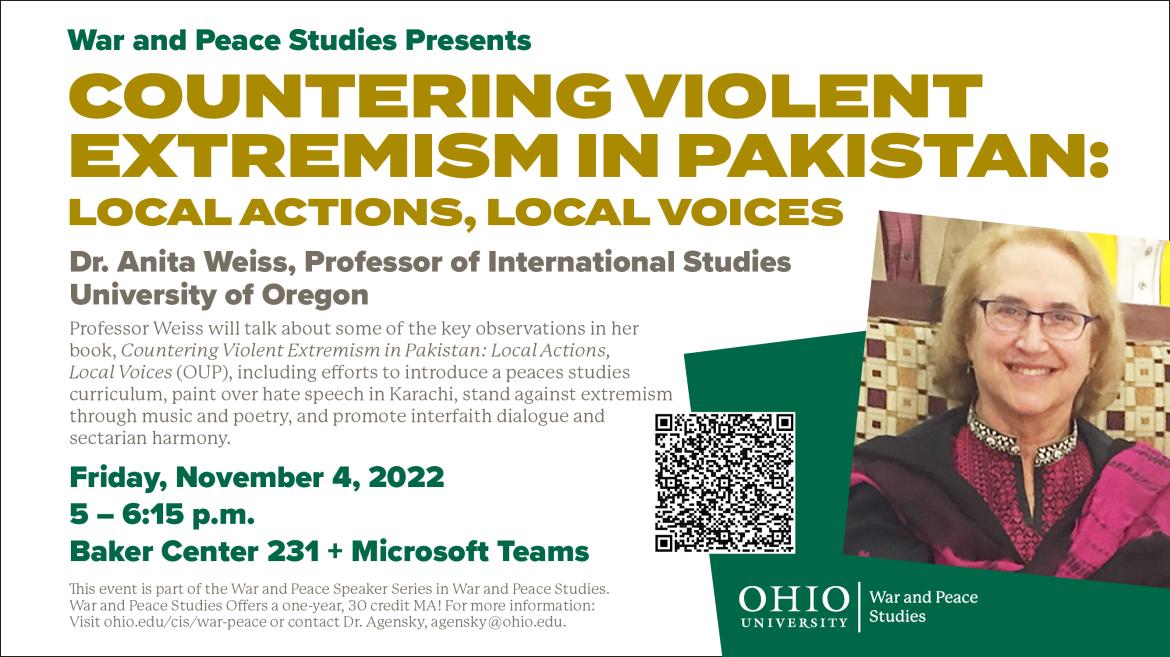 Professor Weiss will talk about some of the key observations in her book, Countering Violent Extremism in Pakistan: Local Actions Local Voices (OUP), including efforts to introduce a peace studies curriculum, paint over hate speech in Karachi, stand against extremism through music and poetry, and promote interfaith dialogue and sectarian harmony. 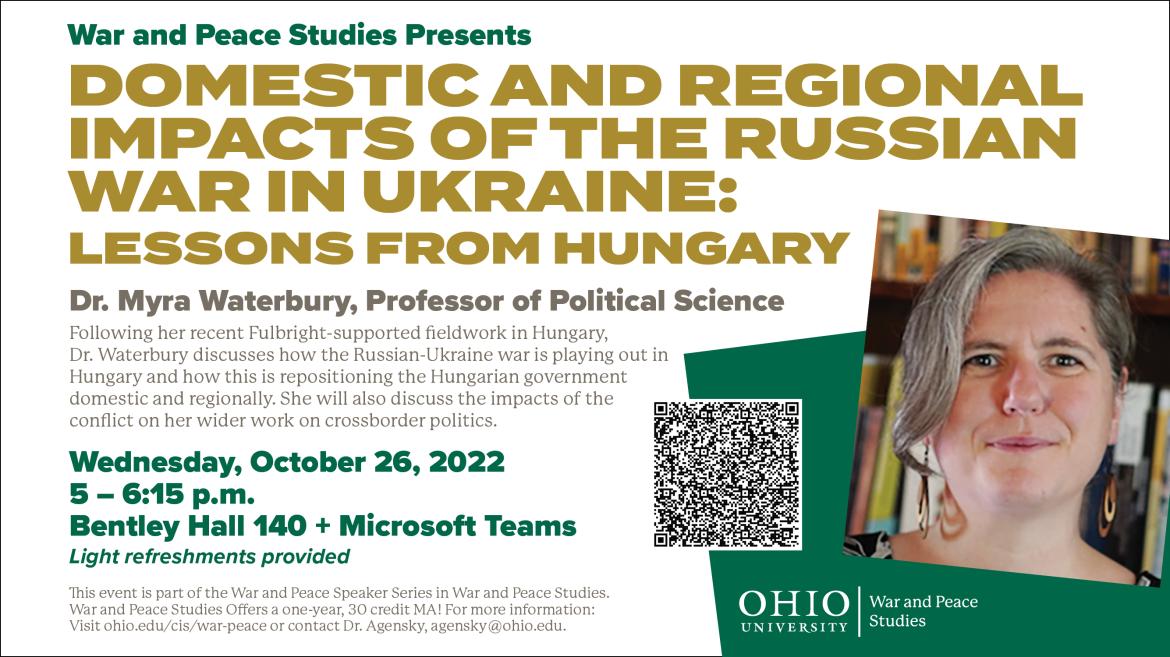 Domestic and Regional Impacts of the Russian War in Ukraine: Lessons from Hungary

Following her recent Fulbright-supported fieldwork in Hungary, Dr. Waterbury discusses how the Russian-Ukraine war is playing out in Hungary and how this is repositioning the Hungarian government domestic and regionally. She will also discuss the impacts of the conflict on her wider work on crossborder politics. 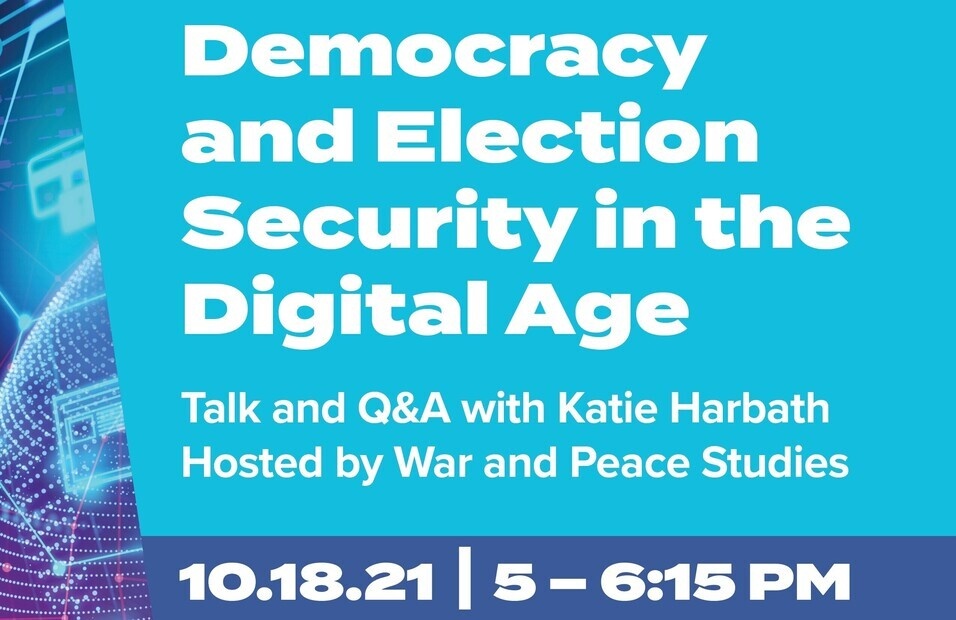 Democracy and Election Security in the Digital Age: Talk and Q&A with Katie Harbath

A fall 2021 discussion with Katie Harbath, former public policy director at Facebook, who has worked on major elections around the globe, including in the US, India, Brazil, UK, EU, Canada, Philippines, and Mexico. Katie is an Atlantic Council Nonresident Senior Fellow and sits on the boards of the National Conference on Citizenship, Democracy Works, and the Center for Journalism Ethics at UW Madison. She was named one of the top 50 people to watch by Politico (2014), and has recently been featured on BBC World News, CNN, MSNBC, and the New York Times. 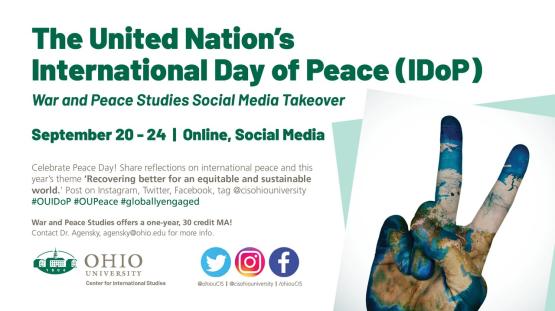 Click here to see how the W&P Studies Community celebrated! 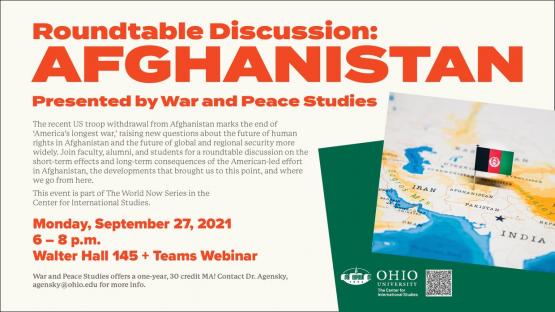 The War and Peace Studies program and hosted a Roundtable Discussion on Afghanistan September 27. The event was part of  “The World Now” Series in the Center for International Studies. “The World Now” series explores current events around the world by way of conversations led by OHIO faculty, students, alumni, community members, and guest speakers. It reflects CIS’s ongoing commitment to global engagement and dialogue.

Read more about the roundtable here. 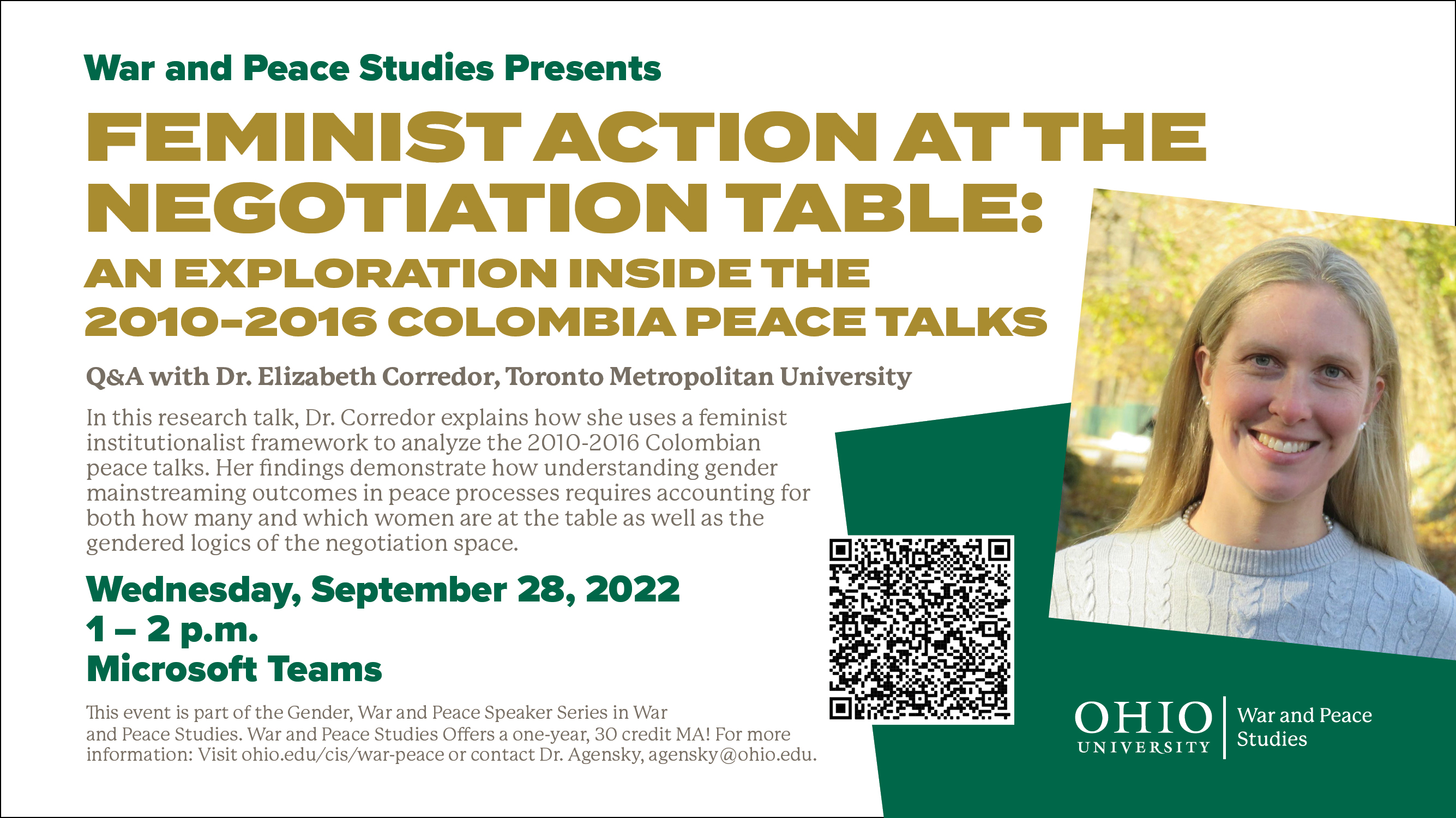 Feminist Action at the Negotiation Table: An Exploration Inside the 2010-2016 Colombia Peace Talks 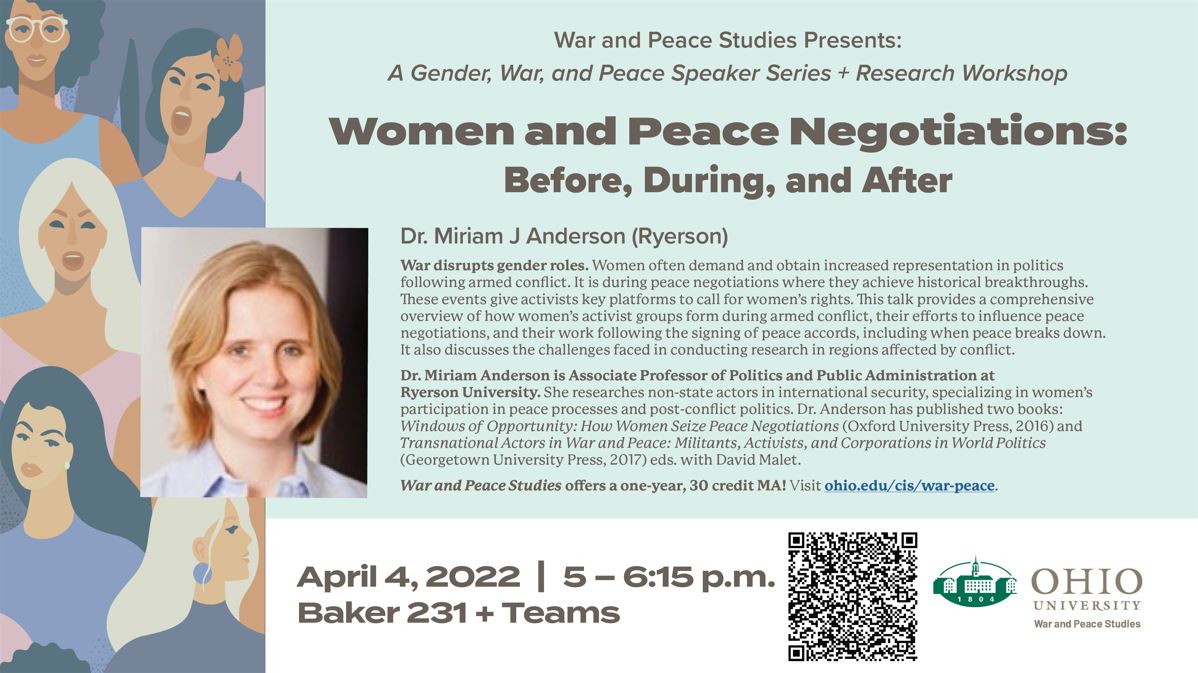 Gender, War and Peace | Women and Peace Negotiations: Before, During, and After

A research talk and Q+A with Dr. Miriam J. Anderson
Part of the Gender, War and Peace Speaker Series

War and Peace Studies at Ohio University provides students to explore the field of global security from an interdisciplinary perspective. Our programs emphasize both conflict and peacebuilding dynamics, allowing students the skills to solve some of the most challenging issues of our time.

Ohio University’s Center for International Studies currently offers both master’s and bachelor's degrees in war and peace studies as well as an undergraduate certificate on the subject. For more information, please see the program options below.

This unique, one-year residential MA program at the Athens campus is designed to prepare students interested in careers in international affairs related to the complex dynamics of peace, conflict, and violence.

This program allows students to explore the field of peace and security studies from an interdisciplinary perspective through one-on-one advising, intensive language training, and education abroad.

This certificate provides graduate students in complementary programs the opportunity to take courses in security studies from an interdisciplinary perspective.

This certificate provides undergraduate students an introduction to the fields of peace and security studies through one-on-one advising and interdisciplinary coursework.