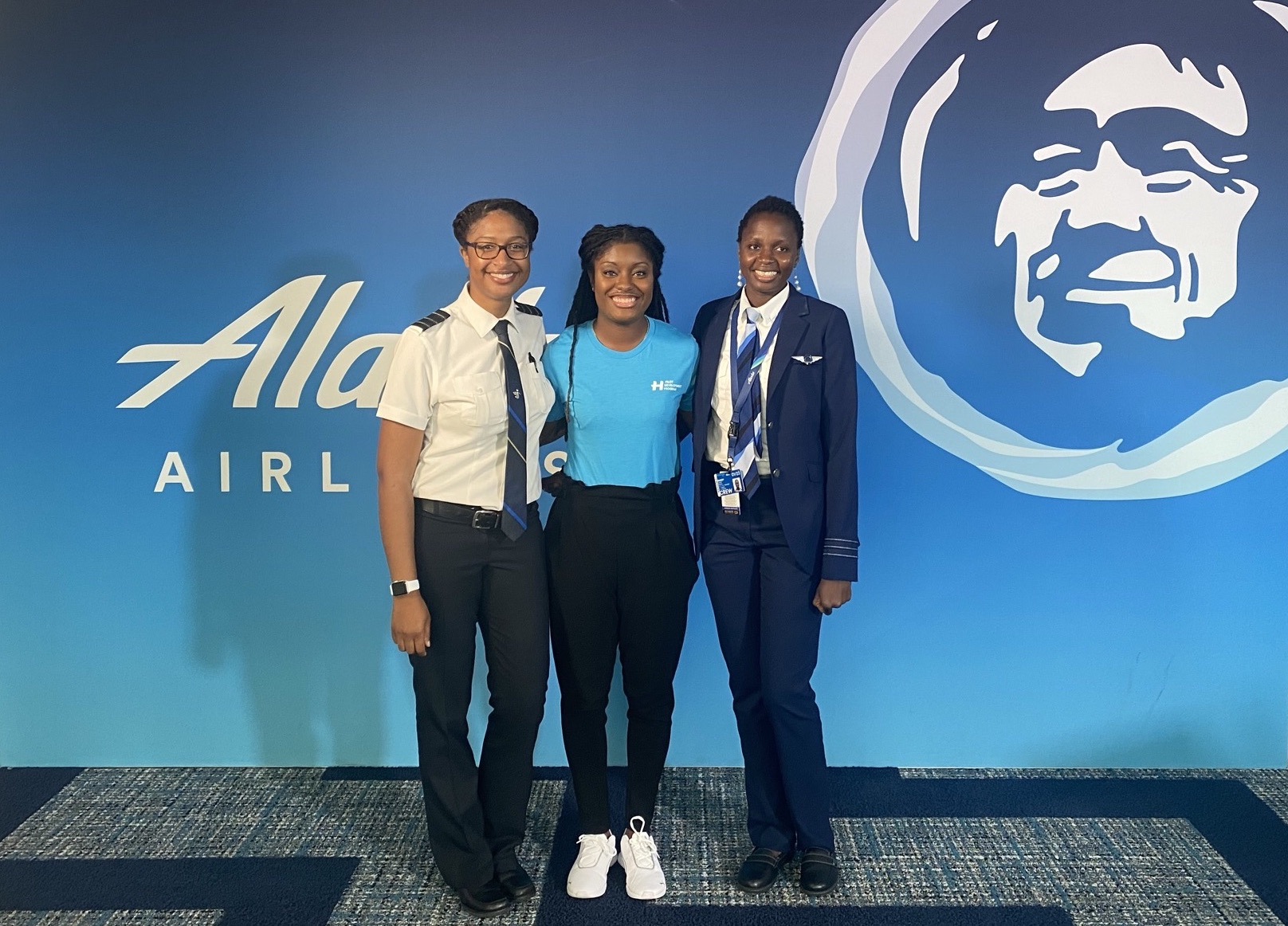 When Mallory Cave, then Mallory Pollard, BSA ’09, graduated from Ohio University, she became the first black woman to graduate from OHIO with a bachelor of science in aviation.

She didn’t want to be the last. And, she wouldn’t be. In 2019, Laurél Davis, BSA ‘19, became the second. Now, the two Russ College of Engineering and Technology alumnae are flying for the same airline company and hoping to inspire other young black females that they, too, can fly in the skies.

Cave was “so happy” to get connected with Davis. “I didn’t know I would be the first black female to graduate from Ohio University with a degree in Aviation Flight, but I knew I definitely didn’t want to be last,” Cave said. “So happy and excited for Laurél and her bright future in aviation ahead. And I’m so glad that we’re putting Ohio University on the map.”

“Meeting Mallory in person felt like meeting a celebrity to me,” Davis said. “I really enjoyed talking to her about the experience she had at OHIO as well as her experience with Alaska Airlines. We had a great time getting to know each other.”

Cave, born and raised in Washington, D.C., graduated in three years from OHIO. If she hadn’t opted to graduate early, she would have had a minor in communication studies as she enjoyed all of her communication professors.

During her freshman year, she even won the Scripps College of Communication Public Speaking Showcase. Coincidentally, her persuasive topic for the speech was “Why Aviation is the Best Major.” Not only did it leave an impression on the judges, but it left an impact on some of the students, too.

“Fun fact – I was able to get a few students to switch their majors to aviation after they heard my speech,” she said.

Her favorite memory while at OHIO, however, would have to be when she flew an airplane by herself for the first time.

“I don’t even know how to properly describe the feeling I had when I soloed an airplane. It was so liberating and made all of the hard work worth it while at the same time fueling my passion for aviation,” she said.

Cave enjoys keeping up with the classmates she met during her time in Athens. “It’s so fun to see where we are in our flying careers considering we all started with zero flight hours at OHIO,” she said.

For Cave, her dreams came true when she became a pilot for Alaska Airlines. “I don’t come from an ‘aviation family.’ No one in my family flies. Thinking back to when I was at Ohio University, this has not been an easy career for me to pursue; it was hard work. A lot of tears were shed throughout my journey of becoming a major airline pilot, there was a lot of self-doubt and not knowing if or how I could make it. I feel a sense of accomplishment every time I get to fly an Alaska Airlines plane,” she said.

For Davis, who is from Pickerington, Ohio, her spark for aviation and wanting to be a pilot came after graduating from Ohio State University with a bachelor’s in human ecology and having a job as a flight attendant.

Davis also credits Deak Arch, associate professor and chair of OHIO’s Department of Aviation, and Theresa Meyer, records management associate and chief flight dispatcher, for helping her during her time at OHIO. In addition to her bachelor’s, Davis also earned a minor in aviation management.

“I did not come from an aviation family so some of the initial concepts were hard for me to grasp. Deak had a way of breaking things down to make it understandable,” Davis said. “I try to keep in touch with Theresa – she made sure everything ran smoothly and was such a great help throughout my time at OHIO.”

“Laurél was a dedicated student,” Meyer said. “She started working in our department as soon as she came to OHIO. She always had a positive attitude, and I truly believe she will go far in her career. I wish her the best in all she does.”

Davis’ favorite memory while at OHIO would be Mom’s Weekend. She recalled attending a comedy show in Baker and having a cookout at the airport but noted her mom wouldn’t fly with her at the time. “But we had a great time,” she said. “I really enjoyed showing her around the airport.”

While a student at OHIO, Davis won the SkyHack “Pilot Shortage” Challenge held at Kent State University in 2017, and won several awards within OHIO’s Department of Aviation, including the Chair’s Scholarship, awarded to students who demonstrate the highest levels of enthusiasm, dedication, academic achievement and leadership.

“[In the SkyHack competition,] Laurél and her team created a method where airlines could enter into a contract with a flight student to reduce the financial burden incurred while the student was enrolled in a collegiate aviation program. This is just one of the models that have been used to recruit future aviators to the airlines,” Deak said. “[That] demonstrates Laurél’s selflessness to help people that she may never meet yet may have provided opportunities that they may not have had otherwise.”

Davis recently received a $5,000 scholarship from the International Society of Women Airline Pilots (ISA+21) to obtain a multiengine instructor license (MEI) at the 2020 Women In Aviation Conference, and is proud to say she passed the MEI checkride in October of 2020.

“My parents have been really supportive throughout this entire journey, and I could not have made it this far without them,” Davis said. She is enthusiastic in launching the next chapter of her life as a pilot, and especially with the Alaska Airlines and Horizon Air family.

“I was super excited to accept my new position as a first officer,” Davis said. “I have wanted to work for Alaska Air Group since 2018 after interning with PenAir and Alaska Airlines. The air group feels like a family, and I’m happy to be part of it.”

While both Davis and Cave did not come from aviation families, they hope that their presence as black women pilots encourages young girls to follow in their footsteps and show how it is possible to achieve goals of flying.

“Black women make up less than 1% of commercial pilots. I hope that I inspire other black women to pursue this career,” Davis said.

For young black female students interested in aviation flight, Cave encourages them to not give up on their passions and to make connections.

“If you are passionate about something, find a way to pursue it. Reach out and get connected to organizations like Sisters of the Skies and Organization of Black Aerospace professionals (OBAP), find a mentor, and don’t be shy to ask for help,” Cave said. “I didn’t come from an aviation background, so I got connected with OBAP and they connected me with my mentor, Michelle Scott, who flies for the Puerto Rican Air National Guard and FedEx. Having Michelle as a resource, friend and outlet helped me tremendously. You don’t have to try and do this alone, get connected and get the support and encouragement you need to make your dreams become a reality.”