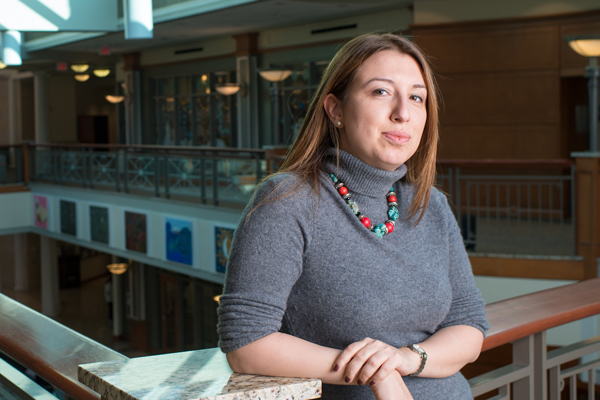 Dr. Nukhet Sandal will bring some fresh-off-the-press perspective to a course she’s teaching on Middle Eastern politics this fall after being published twice this summer about her research on Turkey’s politics.

"While our news cycle here in the United States has focused on the pandemic and presidential politics for the past two years, a lot has been going on in the world, especially in the Middle East. I call it a region 'that never sleeps,’” said Sandal, associate professor and chair of Political Science in the College of Arts & Sciences at Ohio University. “We need to keep an eye especially on Turkey, as a Muslim-majority NATO country which has veered toward semi-authoritarianism under the religious populist leadership of Tayyip Erdoğan.”

Sandal will teach POLS 4420/5420 Middle East Politics in fall 2021 and looks forward to delving into the changing dynamics in the region with her students.

"My research on political competition, populism and foreign policy ties into the dynamics of many countries including Israel, Egypt, Tunisia, and Lebanon, not just Turkey,” Sandal added. “I cannot wait to have vibrant discussions this fall with my students on critical topics ranging from the Abraham Accords to the recent Iranian elections, and discussions on the nuclear deal."

In her book chapter, Sandal investigates the factors behind Turkish President Erdoğan's “aggressive foreign policy that aims to capitalize on newly discovered natural gas resources, an ambitious endeavor that is causing tensions in the Eastern Mediterranean, particularly with Greece and other countries that are party to existing formal and informal arrangements in the region.”

Sandal says that she became interested in writing about this particular topic after Turkey and Greece came close to war in the summer of 2020.

In her chapter, "Testing the Waters, Pushing the Boundaries: Turkey’s Ambitions in the Eastern Mediterranean," Sandal explores the internal and external sources of insecurity driving Turkey and Erdoğan, including economic indicators, changing demographics, the rise of the opposition in domestic politics, the challenges associated with the European Union membership process, and concerns about other regional conflicts. The chapter is part of a book called The New Eastern Mediterranean Transformed edited by Aristotle Tziampiris and Foteini Asderaki and published by Springer.

In her journal article, Sandal delves into how religious populism features prominently in the global political landscape of the region, particularly how Erdoğan is using Adalet ve Kalkınma Partisi (the Justice and Development Party, AKP) as a political strategy to outflank his rivals, especially those with relatively conservative ideologies and understandings of nationalism.

"The AKP, as a religious populist party, has distinguished itself from other Turkish political actors and movements, including the secular political establishment, the National Outlook movement that it used to be a part of, other popular religious movements, and ultranationalist parties. Each of these has their own interpretations of citizenship and nationalism," Sandal argues in her article.

She says religious popular actors around the world — including in Iran, the Philippines, and Egypt — compete with fellow conservative actors through four distinct strategies — outbidding, replacement, co-optation, and securitization.

In the case of Turkey, AKP assumed a liberal, pro-European Union identity to "outbid" the secular parties and made an effort to "replace" the traditional Islamic movements that did not quite succeed in the Turkish political scene before. Once it consolidated its power, the party leaders securitized the rival Gülen movement and declared it a terrorist organization, while joining forces with the ultranationalist Milliyetçi Hareket Partisi (Nationalist Action Party, MHP).

"Different political rivals require different strategies for religious populist parties," Sandal said. "And I wrote about how these strategies were implemented in the case of Turkey."

Sandal's journal article, "Religious Populist Parties, Nationalisms, and Strategies of Competition: The Case of the AK Party in Turkey," was recently published in Religion, State and Society.