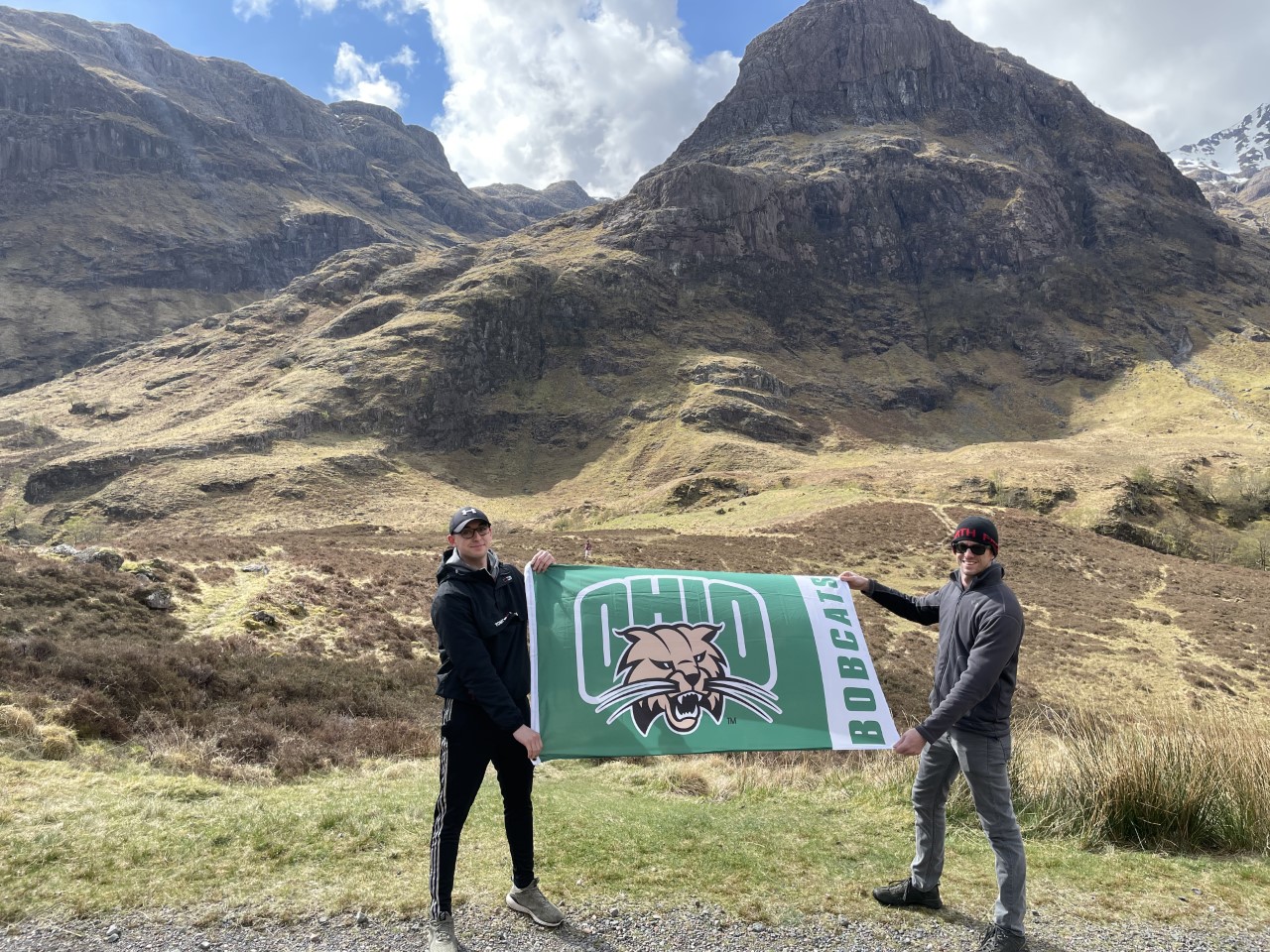 Trevor Ashworth and a colleague display the OHIO flag during his deployment in the United Kingdom.

Garrett Demoss, a sophomore studying criminology in the College of Arts and Sciences, is in the Ohio Air National Guard. He imagined himself going to college after high school, but he always had the passion to join the military.

“I was inspired by the discipline, the skills and training people can develop, and the patriotism of defending my country,” Demoss said. “When I found out about ROTC it sounded like the perfect fit to me.”

Demoss’ first semester of ROTC helped him to see what it takes to be an officer in the United States Air Force. He said training days such as Small Unit Tactics and Military Ops in Urban Terrain inspired him to become the best leader he could be. He enlisted in the Air National Guard halfway through his second semester.

Demoss attended a 15-week training course last winter and spring for the Security Forces Academy Training at Lackland Air Force Base in San Antonio, Texas. He said some days were in the classroom, but most days were spent receiving hands-on field training. Participants had to pass Progress Checks every day to demonstrate their knowledge of combat arms training and maintenance, land navigation, and more.

“All this training was to ensure we were able to fulfill our mission to provide force protection to ensure operational readiness and to protect war fighting resources,” Demoss said. “Now that I have completed both Basic Military Training and technical training, I continue to use those customs and courtesies learned in ROTC at my base to be the best airman I can be.”

Demoss is currently based out of Rickenbacker Air National Guard Base near Columbus, Ohio.

Trevor Ashworth, a senior studying aviation management in the Russ College of Engineering and Technology, joined the Ohio Air National Guard and AFROTC because he had a lifelong interest in joining the military. His career field is aerospace propulsion, which means he works on aircraft engines. He said becoming a part of AFROTC was the best thing for a career he hopes to have with the United States Air Force.

“It helped me to really care for others because being a leader is more than just telling people what to do,” Ashworth said.

Ashworth was deployed in the spring to Royal Air Force Mildenhall in England and helped in humanitarian efforts as well as helping maintain KC-135 aircraft. He aided in refueling the aircraft for efforts in transporting COVID-19-related aid to other countries.

“I worked alongside active-duty personnel and was able to learn a lot about my career field and how active duty works in comparison to the Ohio National Guard,” Ashworth said.

Griffin Braun, a senior studying civil engineering in the Russ College of Engineering and Technology, received an Air Force ROTC scholarship in high school. He wanted to get a degree and join the military right out of high school. AFROTC allowed him to accomplish both of his goals.

Braun said the lessons AFROTC taught him have helped him to become the person he is now. He said having a larger workload helps teach cadets time management skills.

“Without these lessons, I don’t think I would be where I am today,” Braun said. “I wouldn’t have the time management skills to do well in classes. I wouldn't be as hard-working, and I wouldn’t know how to fly a plane.”

This wasn’t the first summer ROTC program Braun attended. In 2019 he spent two weeks at Mountain Home Air Force Base in Idaho, learning about different careers in the Air Force. He got to spend time with security forces, fighter pilots, air traffic controllers and more.