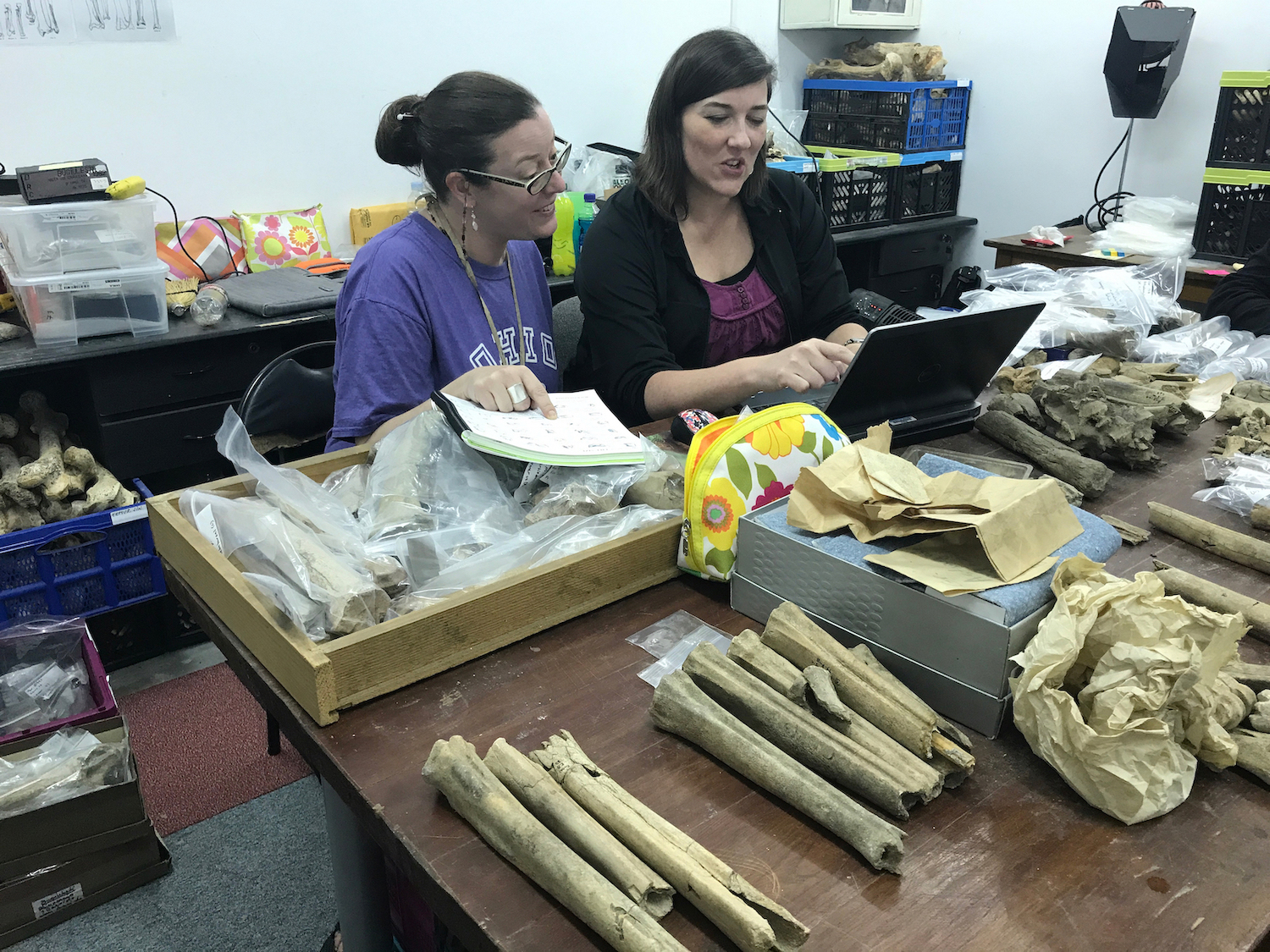 Sabrina Curran, left, in the lab in Romania with Claire Terhune (University of Arkansas).

Early human ancestors (hominins) dispersing from Africa into Eurasia 2 million years ago would have found a hospitable environment to enter Europe through southern Romania along the Danube River and its tributaries, says an Ohio University anthropologist.

An international research team is working to find evidence of the pathways those ancestors took out of Africa as climatic change brought a cooler, more arid climate. That means the team has to peer back in time a few million years to search for environments that would have had an ample supply of food and water.

In search of answers to how and when those hominins actually traveled into Europe, Dr. Sabrina Curran and her team set out to determine what the environment might have been like between 1 to 2 million years ago using fossils from several sites in the Olteţ River Valley of Romania. The Olteţ is a tributary of the Danube River, which is Europe's second largest river and flows from Germany through Southeastern Europe.

"Given the scarcity of evidence for hominins in Europe between 1.85 and 1.4 million years ago, it therefore remains unclear how and when hominins dispersed into Europe in the Early Pleistocene. Critically, the region under investigation here, the Olteţ River Valley of Romania, is one potential region through which hominins are hypothesized to have dispersed into the rest of Europe via the Danube," said Curran, assistant professor of anthropology at Ohio University.

Grasslands, nearby water provided an open pathway for dispersal

A lot of major global climatic and environmental change was happening in the world during the Early Pleistocene. As glaciers ebbed and receded, they left behind a cooler, drier climate, more grasslands instead of dense forests, and substantial changes in animal populations, Curran said. And the researchers conclude that these open, grassland environmental conditions would not have impeded hominin dispersal into Europe.

"Think of grasslands, savannahs and parkland-like settings," Curran said. "These were the preferred habitats of Homo erectus. Support for this hypothesis is found at many of the earliest hominin sites in Asia, which have been reconstructed as open, grassland environments, broadly similar to contemporaneous hominin localities in Africa."

To reconstruct the paleoenvironment that existed — imperative for understanding mammalian, including hominin, dispersal patterns relative to climatic change — researchers examined animal fossils from several sites in Romania to fill in "major temporal and spatial gaps" that exist in the paleo-environmental record for the Early Pleistocene of Europe.

Using fossils to determine diet leads to picture of environment

The research team used a multi-pronged approach using proxies to investigate fossilized teeth and bones from animals including large ostriches, deer, pangolins, giraffes, porcupines, saber-toothed cats, raccoon dogs, bears, hyenas, and more. These samples, many collected during the 1960s and 1980s, are housed in the Emil Racoviţă Institute of Speleology in Bucharest and the Museum of Oltenia in Craiova, Romania. (See Curran Digs into Animal Fossils in Romania in Search of Human Migration Answers.)

By looking at the diversity of animals that lived at the sites, the wear patterns on teeth of animals from those sites, chemical signatures in those teeth, and even pollen from fossilized dung, Curran and her team were able to reconstruct what the environments of the past looked like. The scientists then compared the results of all these types of analysis to previous paleoenvironmental reconstructions for the Olteţ River Valley and for other sites across Europe and western Asia during the Early Pleistocene.

"Using a multiproxy approach, we were able to demonstrate that around 2 million years ago this region of Romania was likely a mosaic of open grasslands and open woodlands, with limited areas of more closed woodlands and forests," Curran says. The majority of animals from the Olteţ River Valley sites would likely have spent their time living in open habitats with only a few species occupying the forest.

For example, some of the carnivores that lived in this area were probably ambush hunters that needed varying degrees of cover and some open habitats. And the deer and antelope-like animals browsed trees, bushes and shrubs that were likely found around open edges of the forest. Two different beaver species and fossilized pollen grains also indicate there were wetlands nearby. Thus, Curran and her team conclude that “hominins were likely not inhibited from dispersing across Eurasia due to environmental constraints at this time.”

The international team will continue its work on the museum fossils and has identified several new locations to dig in its continued search for hominin dispersal from Africa into Europe.

Curran is the lead author on "Multiproxy paleoenvironmental reconstruction of Early Pleistocene sites from the Olteţ River Valley of Romania" published in Palaeogeography, Palaeoclimatology, Palaeoecology.

This research was generously supported by funding from the National Science Foundation (BCS-1636686), The Leakey Foundation, “Emil Racovita” Institute of Speleology (ERIS), the Ministry of Research and Innovation through CNCS - UEFISCDI, grant PN-III-P4-ID-PCCF-2016-0016, and the EEA-Norway Grant #0126 (KARSTHIVES 2, Romanian Ministry of Education and Research, CNCS - UEFISCDI, project number PN-III-P4-ID- PCE-2020-2282, within PNCDI III (to V.D.), the Josiah Charles Trent Foundation and Duke University, the University of Arkansas, Ohio University, and the University of California Santa Barbara.