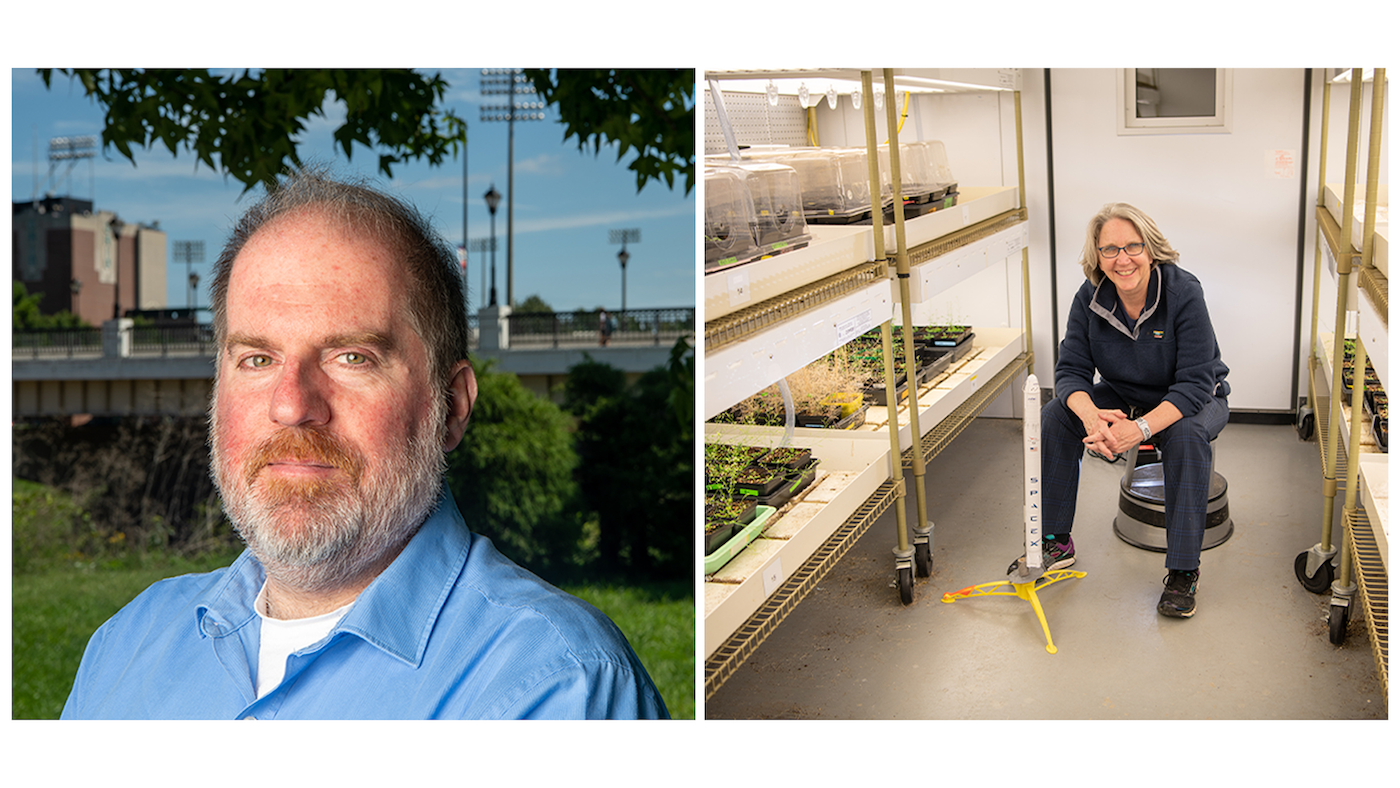 When NASA's SpaceX Commercial Resupply Mission-22 launches from the Kennedy Space Center in Florida on June 3, it will carry two Ohio University experiments to the International Space Station.

The two experiments have a common focus — both are looking at how genes respond to a microgravity environment. Knowing how nerves and muscles remain healthy and how plants grow are essential to NASA's mission of sending astronauts on longer spaceflights.

On Earth, for example, gravity is why plants send roots down, and it provides the resistance for muscles to push against.

Since space is tight on the ISS, the OHIO research teams are using tiny worms called Caenorhabditis elegans to study nerve and muscle health, and tiny Arabidopsis seedlings to look at plant growth.

In both the worms and the plants, RNA is the "mission control" that determines what happens in the microgravity environment of space.

Dr. Sarah Wyatt leads the Arabidopsis experiment and is professor of Environmental & Plant Biology in the College of Arts & Sciences. Wyatt also chairs the interdisciplinary Molecular & Cellular Biology program at OHIO. Dr. Nathaniel Szewczyk leads the muscle research project and is the Osteopathic Heritage Foundation Ralph S. Licklider, D.O., Endowed Professor in Molecular Medicine in the Heritage College of Osteopathic Medicine. He is also principal investigator of the Ohio Musculoskeletal & Neurological Institute and a member of MCB.

The SpaceX 22 flight is scheduled for June 3 at 1:29 p.m. EDT, pending weather conditions.

"It's amazing to think that 56 years ago on June 3, 1965, Gemini 4 launched, with the first American spacewalk and the first use of Mission Control Center in Houston," said OHIO President M. Duane Nellis. "Now, on June 3, 2021, we'll watch a reusable SpaceX rocket take two Ohio University research projects to the International Space Station on a mission to discover more about the RNA building blocks of life and gravity's pull on both plants and animals. And it was Ohio University alumnus Dr. Venki Ramakrishnan who recently won the Nobel Prize for helping to decipher the riddle of the ribosome that enables these genetic experiments."

12 Days in the Veggie Unit on the International Space Station

NASA announced in 2019 that Wyatt received an award for her research team's fourth experiment aboard the International Space Station as the United States prepares for missions to the moon and Mars.

This time her team is sending up square Petri plates of Arabidopsis seeds glued to membranes that are laid atop moist, nutrient agar to support seeding growth. The plates will launch in cold bags to keep the seeds from germinating. Astronauts will unpack the cold bags and load the plates into racks in the Veggie Unit aboard the ISS to start the experiment. Twelve days later the astronauts will remove the membrane from the agar and freeze it and the tiny plants in preparation for a flight back to Earth.

"The plants will come down frozen to preserve the seedlings. That way we'll be able to separate the shoots and the roots when they get here," said Wyatt, who added that the Veggie Unit is also used aboard the ISS by the astronauts for “pick and eat” crop experiments.

Her team will analyze all the RNA in the seedlings — the small, regulatory RNAs as well as the total mRNAs and the mRNAs attached to ribosomes. "This is the really novel piece of this flight because mRNA attached to ribosomes are made into proteins, and proteins are the workhorses that build the body. So we're trying to get closer to what mRNAs are actually used to make protein," Wyatt said.

Scientists once believed that all mRNAs were translated into protein but that’s not true. "Several years ago, scientists discovered this mechanism — called RNAi or RNA interference —  that's probably the result of protecting against viruses." Wyatt recommends a Nova video for an easy, graphic picture of RNAi.

The ribosome is a molecule made of RNA and protein and the site of protein synthesis. "There's a variety of mRNAs that are destined to be disrupted or degraded and not actually produce protein. It may seem like kind of a wasteful system, but it’s not. It's a really elegant system for creating different tissues and responses at different times and different developmental stages," Wyatt said. And along the way, some mRNA gets "chewed up."

"Once we have all RNAs, we hope to identify the regulatory mechanisms that determine which mRNAs that are produced are translated into protein and how that is regulated in microgravity."

Szewczyk focuses on genetic control of muscle decline, most recently in response to space flight. His research explores the effect of inactivity and diet on muscle health with age, novel treatments for muscular dystrophy and the role of exogenous hydrogen sulphide in extending lifespan and improving health.

Recently his experiments have included sending worms into space to see how their muscles react in microgravity. For example, earlier this year the Micro-16 research mission used a miniaturized force measurement hardware called NemaFlex to study muscle strength on the ISS.

His current experiment Molecular Muscle Experiment 2 will fly 3 million worms. The worms will be divided among several experiments aimed at continuing to understand the genes controlling nerve and muscle health in space as well as testing if certain drug and nutritional treatments improve muscle and nerve health in space.

"We’re excited to be leading an experiment involving researchers from five countries. Our experiments will examine if increasing nerve signal to muscle will improve muscle health in space,” Szewczyk said. “This will be complemented by our partners who will explore other aspects of muscle and nerve health, including other potential therapies in space. The worm Caenorhabditis elegans (C. elegans) is a flight-proven and cost-effective model organism. The body wall muscles of C. elegans have structure similar to human skeletal muscle and cellular mechanisms for force generation and transmission are similar, enabling a means to understand mechanisms causing muscle strength loss in astronauts."

The experiment also will "be the first UK national payload. This is a really exciting development for the UK, particularly its ability to provide commercial access to the ISS," Szewczyk said.

Amanda Scott, a medical student at the Heritage College, has accompanied Szewczyk to launch and has been busy looking after the worms for all of the international partners who have been unable to travel due to COVID-19.