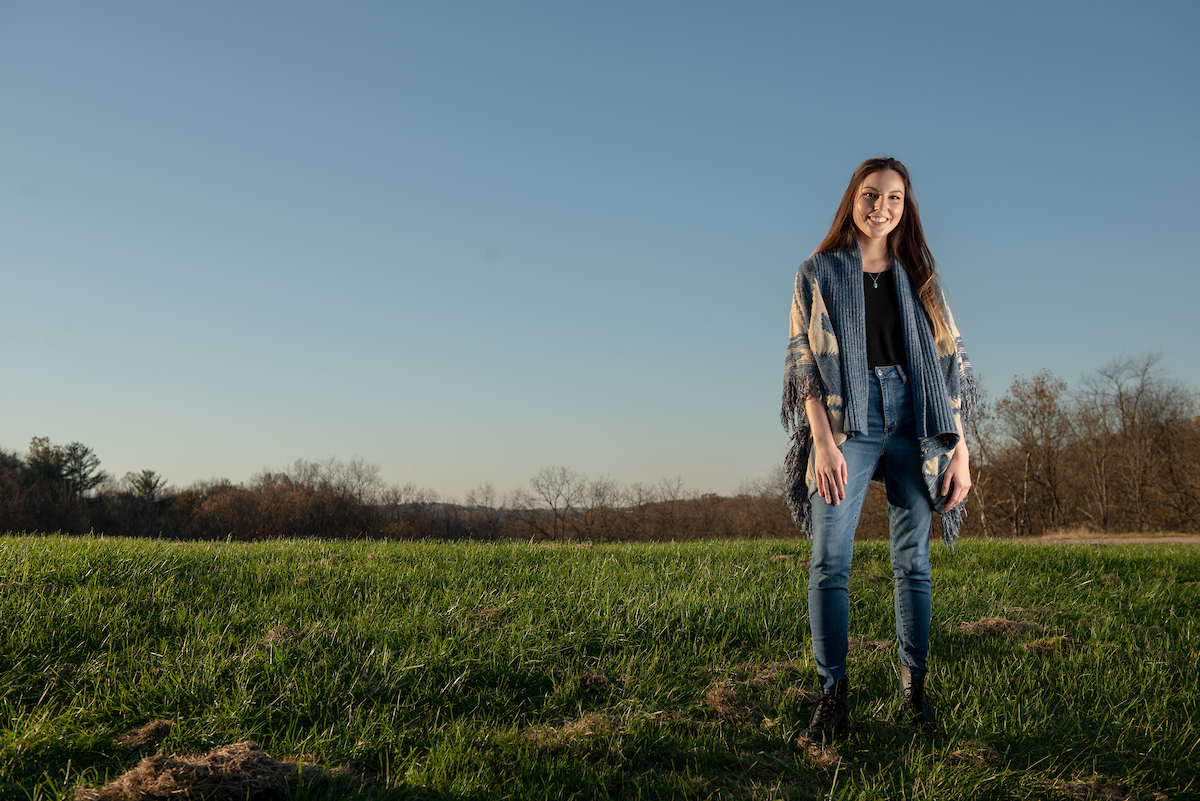 Ohio University master’s student Sarah Liese was one of three people named as a Full Circle Fellow by the Sundance Institute to participate in their Directors and Screenwriters Labs and Native Lab. The labs, which are virtual, provide a space for the artists to develop their craft and projects.

“I am focused on telling stories that are often left out of the media or inaccurately portrayed,” Liese said. “The Full Circle Fellowship at the Sundance Institute will allow me the chance to do just that because its mission is to give a platform to tell Indigenous stories. I am Navajo and Chippewa Cree, and I have never truly seen a story like mine shown in mainstream media.”

The Full Circle Fellowship allowed Liese to meet other Indigenous filmmakers, learn from professionals in the film industry, and receive support from the Sundance Institute to pursue her career goals.

Liese, who studies journalism and photography, took part in the Native Lab from May 10-21, honing in her storytelling skills in a supportive environment and participating in roundtable discussions.

The Native Lab focused on the specific development of storytellers from Native and Indigenous backgrounds, encompassing feature film, episodic work, and general cultivation of artists-in-residence.

During the Native Lab, Liese heard from writers and directors from the film industry, such as James Ashcroft, Kat Candler, Aurora Guerrero, and Jennifer Reeder, and received scriptwriting best practices for film and television.

Before Liese started at OHIO, she received a fellowship with the Native American Journalists Association (NAJA) student newsroom, where she had the opportunity to be mentored by OHIO associate professor Dr. Victoria LaPoe (Cherokee) and learn about Indigenous publications such as the “Navajo Times” and “Indian Country Today.”

“My previous research was guided by Dr. Victoria LaPoe and she was a primary reason why I chose to attend Ohio University,” Liese added. “She’s been my mentor since my fellowship with NAJA and I have been fortunate enough to assist her with her research here at OHIO. Working with Dr. LaPoe has furthered my knowledge about the Missing Murdered Indigenous Women and Children crisis, reporting on the COVID-19 pandemic and its effect on Native communities, and how Native and non-Native people feel about Native American mascots and imagery.”

She now continues to work with LaPoe as a research assistant, researching media coverage of Indigenous people.

“I am so proud of Sarah and her work to highlight Indigenous voices,” LaPoe said. “During her short time here at OHIO, she has already been integral in research, presentations and events covering issues impacting some Indigenous women. I look forward to her next steps in storytelling and can’t be more proud to have her as a part of our school.”

Liese recently identified herself as a Two Spirit (2S) individual, which means she embodies both the masculine and feminine spirit.

“Additional responsibility comes with being a 2S person, and it is not a title that should be taken lightly,” Liese said. “With that being said, I want to highlight the 2S narrative and answer the question of what it means to be a 2S person today, in my professional project/thesis.”

Due to years of Native American mascots and stereotypes, Liese wishes to interview 2S people from different tribal nations to slash the notion that Indigenous people are monolithic since that’s not the case.

As a Full Circle Fellow, she will also have a chance to attend the 2022 Sundance Film Festival, take a trip to Los Angeles where she will go on production facility tours and network with film professionals, receive an internship at the Native Lab to gain hands-on film production experiences and partake in mentorship from the Indigenous Program staff.

“NAJA is always proud to see our former students and fellows taking the next leaps in their careers,” Rebecca Landsberry-Baker (Muscogee Creek), executive director of the Native American Journalists Association, said. “We couldn't be more thrilled to cheer Sarah on as she takes Indigenous storytelling to a new level with her Sundance Native Lab Fellowship. We are proud to support our changemakers using journalism and documentary film to tell our stories.”

Liese is a native of St. Louis and received her bachelor’s degree in broadcast journalism at the University of Mississippi. She then lived in and worked at a TV station on the Mississippi coast following graduation. Her goal is to become a documentary filmmaker, highlighting Indigenous stories.

“I am continuously drawn to nonfiction storytelling and the notion of the human experience,” Liese explained. “We all have a story to tell and no matter what community we grew up in, the emotions we feel are universal. Unfortunately, there is a deep division and a societal sore of discrimination caused by racism, religion, homophobia, politics, etc. I believe the optimum solution is taking the time to listen and exercise compassion and altruism.”