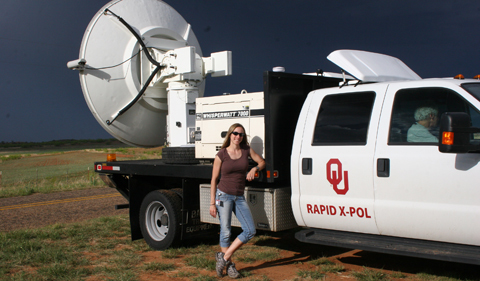 Dr. Jana Houser heads to Oklahoma this month in search of more answers about how tornadoes behave.

Usually, Houser takes some Ohio University students with her to do fieldwork in Tornado Alley. But this year it will just be her, the University of Oklahoma Rapid-scan, X-band, polarimetric mobile (RaXPol) radar team — and a BBC film crew from The Greatest Show on Earth.

Two years ago, Houser showed how traditional radar data coverage such as that from the national radar network is not able to adequately detect tornadoes as they form. She overturned the prevalent theory that tornadoes formed from the top down. For the first time, her observational evidence — and data from Oklahoma's advanced radar system called RaXPol — showed that tornadoes actually form from the ground up.

This year Houser, associate professor of Geography at OHIO, and the RaXPol team will examine  what tornadoes look like as they are forming and moving — over the river, through the woods, and up and down hills.

"I am specifically investigating the visual element of the tornadoes in the context of the radar data as tornadoes are forming, and I am investigating the interaction of tornadoes with topographic features or changes in land cover, ideally close enough to get good visual documentation as well," said Houser, who completed her Ph.D at the University of Oklahoma in 2013.

"We are hoping to observe tornadoes changing their physical 'look'— for example from a stable, single funnel to a multiple vortex structure — as it transitions from, say, a wooded area to a field. Hypothetically, this is something that could happen,” Houser said. "We are also looking for changes in the tornado's path as it crosses a hill or goes over a river valley. The radar data can also fill us in on how the winds within the tornado change speed and organization as these types of land features are encountered. For example, will a tornado's winds get stronger as it moves downhill into a river valley and weaken when it moves up a hill? My previous work suggests that there are statistically significant correlations between tornado intensity and elevation, but the outcome is not always the same. Sometimes a tornado might strengthen going uphill while other times it might weaken."

Houser will take two trips to Tornado Alley in May, and she's hoping the weather cooperates. But the jet stream may not be helpful to the researchers.

The weather pattern is beginning its transition from La Niña to ENSO-neutral. That may be good news for residents, but "meh" news for the mobile radar truck that will be chasing tornadoes.

"Originally everyone was all excited because this season starts out in the La Niña phase, which is known to be associated with greater tornado activity," said Houser. She noted that for her first trip ENSO negative still prevails, so La Niña conditions will be present, though ENSO-neutral conditions will occur sometime within the next two months.

"Moving into an ENSO-neutral phase could potentially reduce tornado numbers because the waviness of the jet stream, which is important for creating the large-scale conditions needed for tornado formation, starts to moderate and be a little less wavy. This is less ideal, but not as bad as the El Niño conditions, which typically correspond to a minimum in tornado events."

In past years, Houser and her students would have started their day in a hotel somewhere in the Central and Southern Plains’ Tornado Alley, looking at upper air soundings, mesonets, satellite and radar images, and multiple weather models to diagnose the best regions for the most severe storms that day. The weather might take them to Texas, New Mexico, Oklahoma or Kansas.

"But this year we will be operating with a smaller crew and taking necessary precautions by using PPE and practicing social distancing," Houser said. Pandemic protocols also will be in place for the BBC team as well.

The Greatest Show on Earth series — featuring the most spectacular natural phenomena on the planet — hopes to bring its cameras into the scientists' realm. The camera operators, too, are hoping for an up-close look at some tornadoes on the move.

Houser's work to investigate how changes in topography and surface cover affect tornado structure and intensity is funded by the National Science Foundation.