In podcast, journalism professor Sweeney reflects on lessons learned from cancer and life 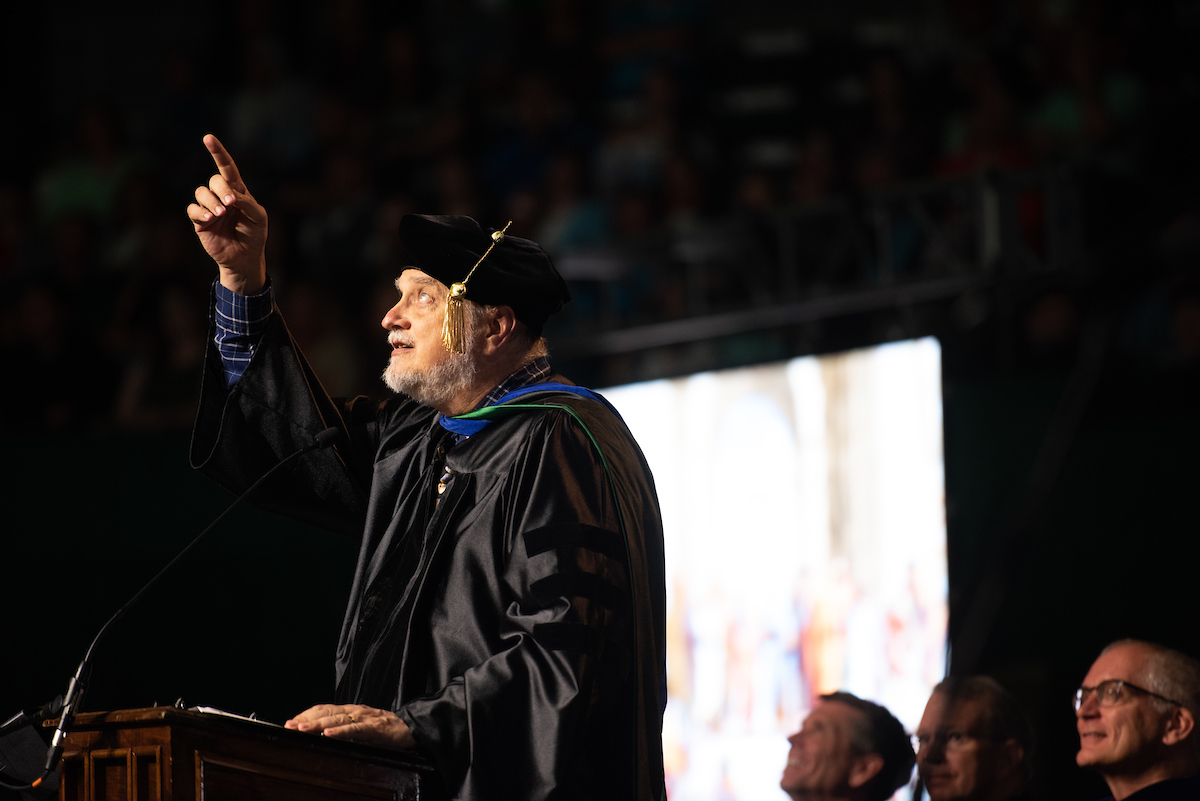 Following a cancer diagnosis in 2013, journalism professor Mike Sweeney continued to teach, persevering through his treatment and its unpleasant side effects. In 2018, his grateful students nominated him for the Outstanding Faculty Award, which is how he came to give the keynote address at the University’s 2019 spring graduate commencement ceremony.

In that memorable speech, Sweeney displayed his signature humor and wisdom, recruiting the audience to join him in performing a Bob Dylan impersonation (“you’ve gotta serve somebody”). He offered this advice: “Find a way to make your life count for others and it will count for you.”

Facing a terminal diagnosis, Sweeney stepped away from teaching in early April. In a podcast series he recorded over the winter with his longtime colleague retired J-School director Bob Stewart, he reflects on his life experiences and on what he calls “the big questions—capital B, capital Q.”

Sweeney says he was “born to be a professor,” and the podcast is sure to attract an audience from the many students he has taught and influenced. Among those students are alumna Pamela Walck, a journalism professor at Duquesne University, and Natascha Roelsgaard, a current PhD student in journalism who recently completed a book project with Sweeney.

“I've learned a lot from Sweeney, both as a researcher, teacher, and human,” Roelsgaard said. “His perseverance is just commendable, and he is kind and not afraid to be vulnerable with his students. He also never hesitates to spell out a student's potential, even when they struggle to see it themselves. He has taught me to be critical of my own work yet shoot for the stars.”

Walck, who completed her PhD in 2015, said she often wishes she could time travel to Sweeney’s classes; the podcast is a chance to revisit the experience.

“To have these conversations preserved and hear him talking about teaching grad students and doing research is really a delight. I’ll be listening to them again,” Walck said.

For Sweeney, there are two specific listeners he keeps most in mind.

“I think this is for my grandkids,” he said. “Jack is nine and Milo’s five, and I haven’t seen them for a year and a half. I would like the younger one to remember me. If he doesn’t, if he has trouble, this is what it’s for.”

The idea for the podcast was Stewart’s originally (though they both remember that Sweeney didn’t hesitate to agree to it). Stewart said he was inspired by Sweeney’s “amazing stories” and an appreciation for his sense of humor, which is on prominent display in each episode.

“One of the fun things for me as I go through and edit them is to realize how much Mike laughs,” Stewart said. “The sound of that laughter makes everything feel normal. And that's a real gift, to be able to share your laughter with people.”

Longtime colleagues in the school of journalism, both Sweeney and Stewart said they appreciate how the podcast has allowed them a chance to connect during the pandemic. Sweeney said one of the best parts has also been the opportunity to reflect on his life’s highlights.

“It's been nice reminiscing about being blessed, is how I describe it in the series,” he said. “There have been many times in my career where I've faced just a terrible decision, and made a difficult one, and it turned out to be the right one. It's nice to relive those.”

The subject of Sweeney’s illness was also an important factor in the series.

“I find that I've had a lot of conversations about his cancer journey,” Stewart said. “I thought he could probably be pretty open about that, and that has proven to be the case.”

The last episode addresses Sweeney’s cancer directly; he describes its progression and how he has coped with the hard realities of a terminal diagnosis. In that episode, Stewart asks him what he prays for.

Sweeney said he prays for his family, and for the chance to see his grandchildren in Minnesota and to drink a beer with his son on a spring day.

“Don’t cry for me. Remember me, and you, doing happy things and laughing. That’s my prayer.”

Sweeney also discussed what he hopes to accomplish by sharing the story of his illness.

“I want to teach people about life. I want them to not mystify cancer,” he said. “There’s nothing in it you can’t handle. You’d be surprised how much strength you have to deal with cancer if you have to.”

Sweeney has reached many people with that message; Roelsgaard said she is not the only student who has been inspired by Sweeney.

“I hope that Sweeney knows how many of us students came here because of him, stayed here because of him, and how grateful we are for having been able to learn from him,” Roelsgaard said. “There have been a lot of moments where I think other people would have stepped back or given up, and Sweeney just keeps on going and pushes for the change he wants to see in the world.”

Stewart saved the “Big Question” episode for last, but plans a special finale to round out the podcast series: he’ll post the audio recording of Sweeney’s graduation address.

“I think (the speech) is something a lot of people have thought about, both in terms of their own lives and as a university,” Stewart said.

When asked about his memories from the day of the speech, Sweeney described encountering enthusiastic audience members as he left the ceremony.

“It was a lot of fun walking out of that stadium getting hugs from total strangers,” he said, adding that the University’s president didn’t hold back either.

“Oh my goodness. I got the biggest bear hug from President Nellis. I think he was probably saying, good job. Thank you.”

Roelsgaard echoed those sentiments, reflecting on the memorable Dylan singalong (“you gotta serve somebody”) from that day.

“I think those words sum up his teaching and life philosophy,” she said. “He is endlessly kind and always puts other's needs before his own. There is always a purpose to be and do good and to empower those around him. I have been so lucky to learn from his tenacity and kindheartedness for nearly six years.”

Episodes of the podcast “Conversations with Mike Sweeney” can be found here. Watch the 2019 graduate commencement ceremony.